We must repeal AFSPA to begin to heal Kashmir, and to enhance India's moral stature and that of the army, says Ajai Shukla 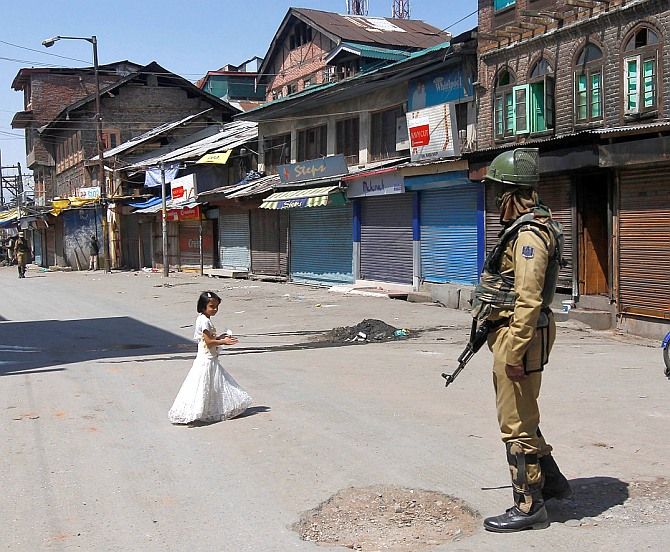 A Kashmiri girl passes by a security personnel standing on guard on a deserted street in Srinagar. Photograph: Danish Ismail/Reuters

Jammu & Kashmir remains in the news, mostly for negative reasons -- the devastating flood and its aftermath; ceasefire violations on the border; and for what is shaping up to be a communally polarised election.

The forthcoming elections -- which New Delhi likes to hold up as Kashmir's acceptance of democratic India -- will be dissed by Kashmiris as an Indian ploy.

If Prime Minister Modi is to drain the Kashmiri ulcer, he cannot be deterred by the strident, pro-azadi rhetoric, which reflects just one side of the Kashmiri brain.

Instead, he must reach out to the other side, launching a serious initiative to convince Kashmiris that their future lies with India.

New Delhi's shabby practice for winning Kashmiri hearts has traditionally been to throw money at the valley through leaky schemes that benefits only the venal political-contractor lobby that is India's constituency in the valley.

Most Kashmiris find this practice deeply offensive, yearning as they do for political solutions to the 25-year-old armed uprising and the six-decade-long political struggle.

Modi must, therefore, reach out to the valley with eye-catching political concessions.

The obvious, low-hanging fruit waiting to be plucked is the Jammu & Kashmir Armed Forces (Special Powers) Act, 1990, the emergency law that legally empowers the army to search, apprehend, destroy property and shoot to kill on suspicion.

The generals insist they need the protection of AFSPA in an environment in which militancy has taken control of the judiciary. 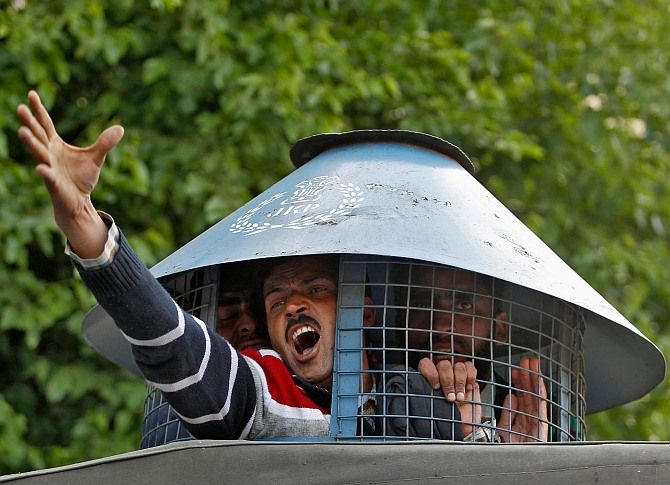 A Kashmiri shouts slogans from inside a police vehicle after he was detained during a protest in Srinagar. Photograph: Danish Ismail/Reuters

In 2011, when J&K Chief Minister Omar Abdullah proposed revoking AFSPA in the districts of Srinagar, Budgam, Jammu and Samba, the army's top commander in the valley, Lieutenant General Syed Ata Hasnain -- an officer acclaimed for his outreach -- flatly rejected the idea as premature.

He argued that the peace of 2011, coming after three straight years of mass street agitations across Kashmir, was a separatist strategy to rest, regroup and recruit; before resuming the agitation in 2012.

Declaring that Kashmir presented not just a law and order problem but also an existential threat to India, Hasnain said the army's road lifelines to its defences on the Line of Control pass through Srinagar and Badgam.

He pointed out that the air approaches to Srinagar airfield, used by civilian airliners and military aircraft, needed to be secured by the army, as did the Srinagar cantonment, from where war with Pakistan would be directed.

Underlying the army's reluctance to forego AFSPA is the conviction that, once lifted, its reintroduction would be politically impossible, even in a crisis.

Neither the central, nor state, governments have reassured the army on this account.

The army steadfastly rejects the proposal to withdraw AFSPA from Srinagar and Badgam, even though the J&K Police and the Central Reserve Police Force protect these districts, neither of which are covered by AFSPA.

The generals argue that police and CRPF protection is just one layer of security.

As important for keeping these districts safe are "area domination" operations by army columns to keep militants at bay.

These operations, says the army, must be covered by AFSPA.

So far the army's apprehensions have proved to be unfounded. 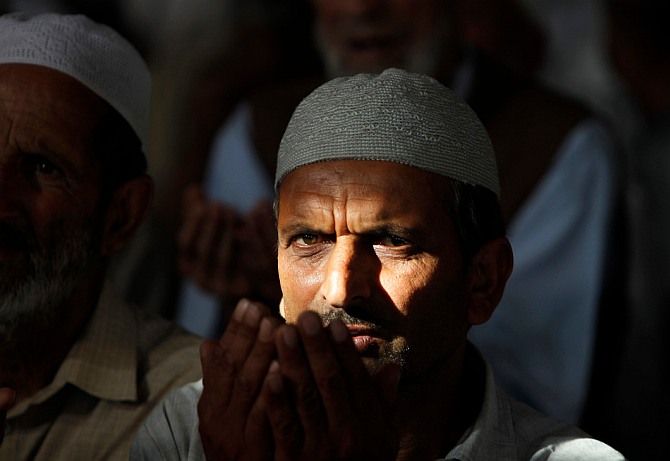 A Kashmiri prays inside the shrine of Sheikh Abdul Qadir Jeelani, a Sufi saint, in Srinagar. Photograph: Danish Ismail/Reuters

The years since 2011 have gone by without renewed street protests.

Now a new spectre has been raised -- the army says the NATO drawdown from Afghanistan at the end of this year could bring jihadi hordes flooding into Kashmir.

Next year, the bogey could be the Islamic State.

One Kashmiri has asked me whether complete, global peace is a pre-requisite for lifting AFSPA and restoring normalcy in Kashmir.

Thinking strategically, rather than merely tactically or operationally, it is hard to dispute that AFSPA has emerged as a potent symbol of oppression, the disadvantages of which transcend any protection that it might once have provided the military.

The army understands that, in battle, when a defensive position is under overwhelming attack, it is time to withdraw to a fall-back position.

Yet the generals have not translated that battlefield common sense to an identical situation on the psychological and perceptual plane.

Defending AFSPA is simply too damaging for the army's own image.

It is time to fall back to the next position, by devising operating procedures that do not require the protection of this draconian law.

Criticism of the AFSPA, which resonates worldwide, is embarrassing for New Delhi.

In 2005, the Jeevan Reddy Committee, established to review AFSPA, termed it "a symbol of oppression, an object of hate and an instrument of discrimination and high-handedness".

In 2013, the Justice J S Verma Committee, which was set up to examine criminal law relating to sexual assault, sharply criticised AFSPA and recommended its immediate repeal.

Last year, the Justice Santosh Hegde Commission, mandated to examine extrajudicial executions in Manipur, noted that AFSPA had made "a mockery of the law".

International criticism has been as sharp with several UN special rapporteurs, and international human rights bodies urging New Delhi to repeal the law.

Repealing this law is essential for enhancing India's moral stature and that of the army. It would substantially defang the criticism of human rights groups and that of Kashmiri separatists.

Finally, it would send out an unmistakeable signal that New Delhi is ready for a political dialogue with Kashmir, a prerequisite for restoring normalcy to that troubled state.