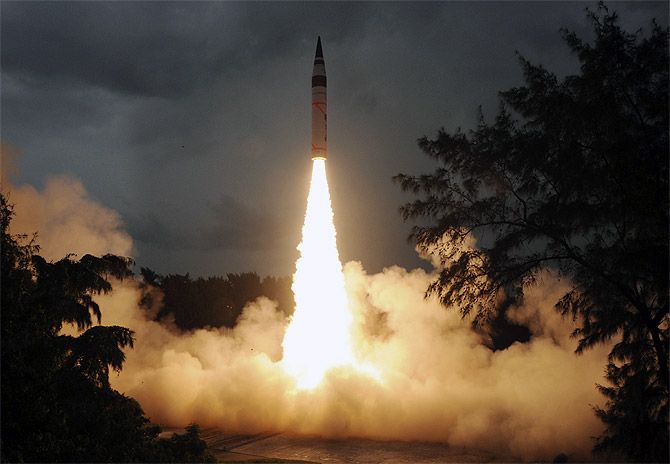 In March, Lieutenant-General Khalid Kidwai, the long-time chief of Pakistan's Strategic Plans Division (which controls nuclear weapons targeting) had said the same thing in a talk in Washington; but since Kidwai had recently retired, that was not official confirmation.

Now Chaudhary has explained that TNWs are Pakistan's counter to India's so-called Cold Start Doctrine. This doctrine, the very existence of which is denied by New Delhi, is an operational plan to punish unacceptable Pakistani provocations -- such as high-casualty terrorist strikes in India -- by launching swift, shallow offensives into that country with tank-heavy forces.

Pakistani military planners know that, given India's powerful tank forces, they would be spread too thin to halt India's Cold Start thrusts. Inevitably, many thrusts would make headway, capturing Pakistani border towns and creating the impression of an Indian victory. The rapidity of Cold Start offensives would overtake the deterrence time lines that had prevailed earlier.

Now Indian war objectives might be met before Pakistan's General Headquarters at Rawalpindi could signal to New Delhi -- halt, or we will cross the nuclear threshold, using traditional nuclear weapons of 15-20 kilotonnes (KT) or more, delivered by missiles over hundreds, even thousands, of kilometres. GHQ tightly controls these "strategic" weapons, so it takes time to ready and launch them, providing India's offensive forces the time to achieve their ends.

To speed up their nuclear response, Pakistan developed TNWs -- relatively small nuclear weapons, usually below 2-3 kilotonnes, which are launched at battlefield targets like tank forces, at ranges of 60-100 kilometres, through short-range missiles. Due to the distances between the National Command Authority in Islamabad and the India-Pakistan border, TNWs would have to be located near the border and placed under local corps commanders.

This "de-centralisation" renders TNWs vulnerable to theft or, even unauthorised use by renegade commanders. While Pakistan must be developing preferential access links for its TNWs -- software codes to restrict their operation to select commanders -- these would take time to implement and perfect. And, in the confusion of a possible battlefield debacle, TNWs could well fall into the hands of unauthorised persons.

Such doomsday scenarios create the insecurity and uncertainty that suit Pakistan. Islamabad hopes that by posing a clear and present danger, it can force Washington's hand, extracting concessions -- like a nuclear pact -- that would allow Islamabad spin-doctors to claim Pakistani equivalence with India, a cherished strategic objective.

Sharif implicitly justified his TNWs by blaming a "hostile" India for forcing his military's hand. Addressing the US Institute of Peace, Sharif declared that India's "dangerous military doctrines… will compel Pakistan to take several countermeasures to preserve credible deterrence." Nobody doubted he was talking about TNWs.

New Delhi has little control over Pakistan's decision to deploy TNWs. Nevertheless, Indian policymakers must now incorporate in our nuclear doctrine a realistic response to TNWs. Our nuclear doctrine -- issued as a "draft nuclear doctrine" in August 1999, and modified slightly in a gazette notification on January 4, 2003 -- pledges that India "will not be the first to initiate a nuclear strike, but will respond with massive retaliation should deterrence fail."

This implies India's default response to a Pakistani TNW strike -- even against Indian troops on Pakistani soil -- would be "massive retaliation", ie, striking counter-value targets (towns and cities) in Pakistan with the full weight of India's arsenal.

However, India's massive response would only damage, not destroy, Pakistan's nuclear arsenal. According to the well-respected Arms Control Association, India and Pakistan have about 120 nuclear weapons each. Even if India's "massive retaliation" destroys half of Pakistan's arsenal (and there is little surety of that), India would then have to absorb Pakistan's "second-strike" response, which would consist of about 60 nuclear bombs on Indian towns and cities. This would be an unimaginable blow. Yet, Indian planners blithely go about their day as if the game would surely end with India's massive first strike.

Furthermore, few outside Lutyens New Delhi swallow the notion that India would respond to a single TNW by reducing Pakistan to a smoking ruin (albeit one that would shortly afterwards reduce India to the same state). Deterrence is a mind-game that one side quickly loses if the opponent does not believe that a threat will be executed.

The first, ie, power, is not the actual capability of the deterring country (India), but what the country being deterred (Pakistan) believes its capability to be. If Pakistan believes, rightly or wrongly, that Indian missiles and aircraft cannot deliver nuclear weapons to Pakistani targets, the P in the equation will be zero, and deterrence will fall to zero too.

The second factor, ie, intent, represents the deterring country's "political and military willingness to use force". Regardless of India's actual strength and intent, if Pakistan believes that Indian policymakers do not have the stomach for obliterating Pakistan with a devastating "massive retaliation", the factor D, ie, the deterrence value of the Indian arsenal again falls to zero.

That is why Israel has retaliated swiftly and overpoweringly to every provocation: pre-emptively smashing three Arab air forces in the Six Day War of 1967, rescuing hostages from an El Al airliner hijacked to Entebbe in 1976, pre-emptively destroying an Iraqi nuclear reactor at Osirak in 1981, taking out Syrian anti-aircraft missile sites in the Bekaa Valley in the Lebanon War of 1982, avenging the killing of three Israeli civilians in 1985 with punitive air-strikes on the Tunis headquarters of the Palestine Liberation Organisation, and striking and destroying a suspected nuclear facility in the Deir-ez-Zor region of Syria in 2007. Given Israel's willingness, even eagerness, to use pre-emptive or retaliatory force, its I-factor is extremely high, raising deterrence.

In contrast, New Delhi's forbearance pegs its I-factor close to zero. India's military was poised on the border for 10 months after Pakistani terrorists attacked India's Parliament building in 2001, but New Delhi desisted from using force.

Similar restraint was displayed after a terrorist squad sailed into Mumbai from Pakistan and killed 165 people in the infamous 26/11 attacks.

New Delhi also shrank from retaliating against Pakistan in 1993; after 257 people were killed in serial bomb blasts in Mumbai; and in 2006, when a series of bombs in suburban trains in that city killed 187 Indian citizens.

The last time India used force against Pakistan was in 1999, when troops from that country sought to change the border in Kargil.

Without passing judgment on such restraint -- forbearance is often advisable -- New Delhi's remarkable consistency in avoiding the use of force subtracts credibility from any Indian doctrine of massive retaliation.

Pakistan's formal announcement of TNWs is a reminder for the Indian doctrine to incorporate flexible retaliation, which increases our planners' options, and complicates the opponents' calculations.

Image: The Agni V, India's most prestigious missile designed to hit targets at 5500 km, is part of the country's ambitious IRBM arsenal and can deliver nuclear warheads to targets across south, south-east, central and west Asia, China, most of Europe and large parts of Africa. Photograph: Reuters.