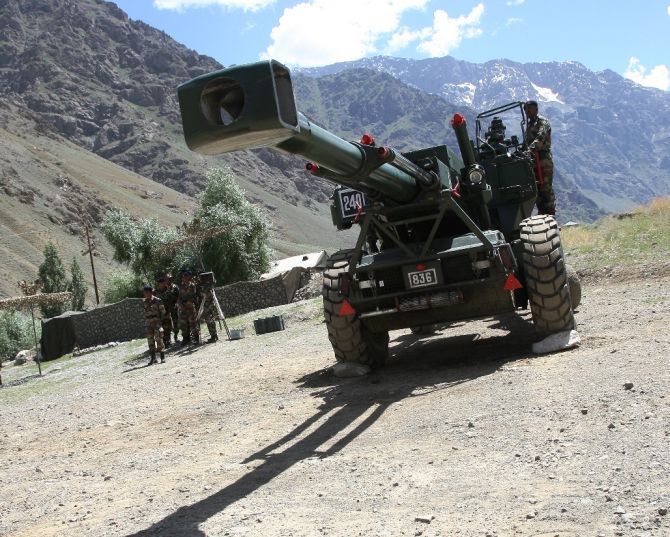 The role of artillery in the battlefield during the Kargil war cannot be forgotten and will forever be etched in golden letters.

India’s victory in Operation Vijay was not achieved without major sacrifices. Three valiant officers and 32 brave soldiers of the Regiment of Artillery laid down their lives in the true spirit of Izzat-O-Iqbal. Pakistan lost is estimated 69 officers and 772 OR, mainly of Northern Light Infantry. Over 1,000 Pakistani soldiers were wounded.

The young company commander and artillery’s Forward Observation Officers led from the front by personal example and thus motivated their troops to perform outstanding acts of gallantry. For this exceptional and exemplary valour and grit in heroic battles in Kargil, the chief of the army staff honoured 11 Infantry battalions, three units of Regiment of Artillery namely 141 Field Regiment, 197 Field Regiment and 108 Medium Regiment and two Reconnaissance and Observation Squadrons of the Army Aviation with special award of Unit Citations.

By honouring these regiments the army acknowledged the immense part played by all the units of the Regiment of Artillery in the gallant fight to re-capture Indian territory from Pakistan intruders.

Despite the controversy over its induction, 155mm FH 77-B Bofors performed remarkably well and was mainstay of artillery in the operations. Its maximum range of 30 km enabled deep strikes on the enemy’s gun positions, administrative installations, ammunition dumps, and headquarters, besides neutralizing forward positions held by the intruders. By moving up these guns, 105mm field guns, 160mm and 120mm Mortars and 122mm GRAD BM 21 Multi Barrel Rocket Launcher’s into forward guns positions for ‘direct’ fire on enemy localities, literally under the nose of the enemy and thereby inviting certain enemy artillery fire onto themselves, the gunners exhibited unparalleled courage in battle.

The gun positions came under heavy enemy counter-bombardment from time to time, many a times causing serious casualties. But the gunners there stood fast and continued to respond to the requirements of the Battery Commander/ Observation Posts. It was unique in the history of 286 Medium Regiment that all its 18 guns barrels wore out their life in 25 days since Operation Vijay commenced. They continued to fire as extensively with newer guns that they received from 163 Medium Regiments while operations were on.

The Kargil conflict once again established beyond doubt that artillery firepower plays a major part in achieving victory on the modern battlefield. Accurate artillery fire reduces the enemy’s defences to rubble. Sustained artillery fire gradually wears the enemy’s resistance and ultimately breaks their will to fight. By systematically degrading the enemy’s fighting potential before a physical assault is launched, the artillery helped to reduce the casualties suffered by assaulting infantrymen. Throughout the offensive phase of Kargil conflict, artillery was called upon to respond to emerging situations and it did so with alacrity and telling lethality. The infantry battalions involved in the fighting were the first to acknowledge the immense debt of gratitude that they owe to their artillery comrades.

During the peak period of assaults, on an average, each artillery battery fired over one round per minute for 17 days continuously.  Such high rates of fire over long periods had not been witnessed anywhere in the world since the World War II.  Even during the World War-II, such sustained artillery firing was not common at all.

The men at the guns had blisters on their hands from carrying and loading shells and cartridges. Very few of them got more than a couple of hours of sleep in every 24 hours cycle.  They had no time for proper meals and were often themselves under enemy artillery fire.  Yet, they carried on relentlessly.  No soldiers better than these exist anywhere in the world.  Last but not the least artillery was, in fact, the prime killer since 80 per cent of the casualties suffered by the enemy were on account of artillery fire.

There were limited gun areas available for conventional deployment. Perforce, recourse had to be taken to split the batteries, often in two’s and three’s. At places there was a height differential of almost 40 to 50 feet between the first and sixth fun of a battery. On the other hand, there were occasions when guns had to be deployed wheel-to-wheel.

In the final analysis, while all arms and services contributed significantly to the concerted effort to evict the Pakistani regulars from Kargil sector, the victory belonged to the indomitable courage and selfless devotion to duty of the Indian infantryman and the overwhelming firepower of the artillery and the Indian Air Force.