News
Business
Movies
Sports
Cricket
Get Ahead
Money Tips
Shopping
Sign in  |  Create a Rediffmail account
Rediff.com  » News » More Indians have died of covid than all our wars together

More Indians have died of covid than all our wars together 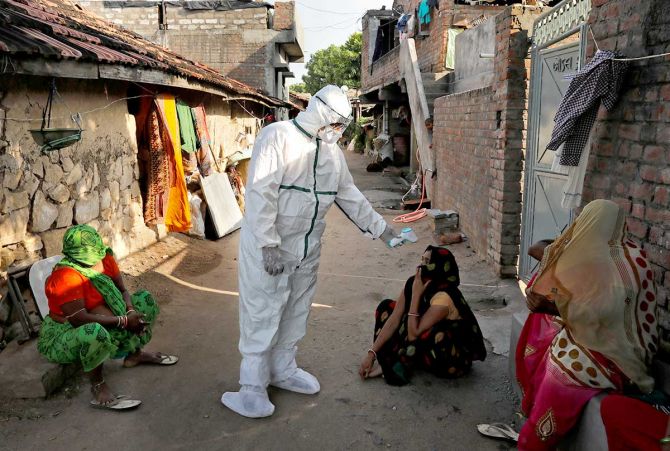 IMAGE: A healthcare worker checks the temperature of a woman in Gujarat, September 22, 2020. Photograph: Amit Dave/Reuters

The number of people who have died of coronavirus in the United States has crossed 200,000, by far the highest figure for any country in the world.

One way of looking at the figure is that America is a large country and a superpower where everything assumes a larger-than-life proportion.

Our government feels gratified that the figure looks modest.

Dr Christopher Murray (external link), Director of the Institute of Health Metrics and Evaluation at the University of Washington had predicted that more than 200,000 Americans would die due to COVID-19 by the month of September.

He is spot on -- although, admittedly, that is a horrible thing to say.

But he cautions that the figure of 200,000 still needs to be calibrated since these were of people who had tested and were found positive, and, therefore, there are likely even more deaths that might have occured, caused by coronavirus and/or its manifestations.

He told the BBC that therefore, 200,000 should be taken as a sort of "conservative view of the death toll in the United States."

However, the really stunning part is what Dr Murray told the BBC about his prognosis for the future.

He has just completed the 'modelling' for the months ahead, which shows that a big surge can be expected, considering that coronavirus is "seasonal".

A difficult 6-month period lies ahead.

Dr Murary said that the surge has already started taking place in Europe and it is starting in the US as well.

Dr Murray's 'modelling' sees 'almost another 200,000 deaths' by coronavirus in the US by the end of this year.

Isn't President Donald Trump aware of all this -- that the number of dead is equivalent to a 9/11 attack every day for 67 days? No doubt, he is.

It probably explains his renewed assault on the 'China virus' in the virtual address (external link) before the UN. 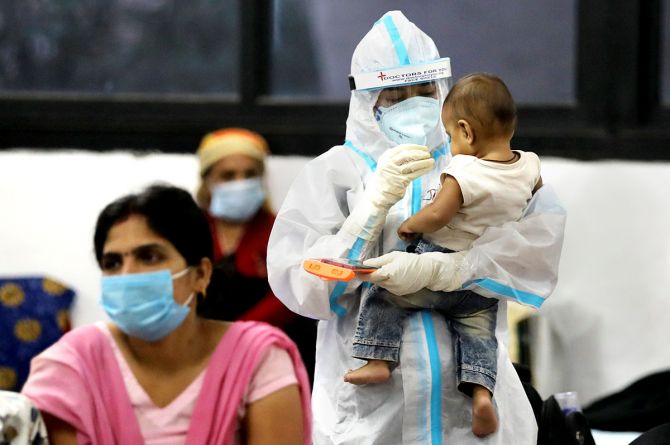 IMAGE: A medical worker plays with the child of a woman recovering from coronavirus at a quarantine centre in New Delhi, September 22, 2020. Photograph: Anushree Fadnavis/Reuters

The Associated Press carried a devastating report (external link) on Trump's handling of the coronavirus pandemic.

Some excerpts: 'Over the past six months, the Trump administration has prioritised politics over science at key moments, refusing to follow expert advice that might have contained the spread of the virus and COVID-19... Trump and his people have routinely dismissed experts' assessments of the gravity of the pandemic, and of the measures needed to bring it under control. They have tried to muzzle scientists who dispute the administration's rosy spin...'

'Today, he is pushing hard for a resumption of normal activity and trying to project strength and control to bolster his political position in his campaign against Democrat Joe Biden.'

The AP report added, 'In late January, after the virus had first emerged in Wuhan, China... what was needed, epidemiologists said, was an aggressive public education campaign and mobilisation of contact tracing to identify and isolate the first cases before the disease spread out of control.'

'Instead, Trump publicly played down the virus in those crucial first weeks, even though he privately acknowledged the seriousness of the threat... But the virus kept coursing through the country, and the world.'

'And with a president bent on minimising the dangers, the US would become ever more polarised, with the simple acts of wearing masks and keeping a distance transformed into political wedge issues... By mid-March, hospitals in New York and elsewhere were deluged with patients and storing bodies in refrigerated morgue trucks.' 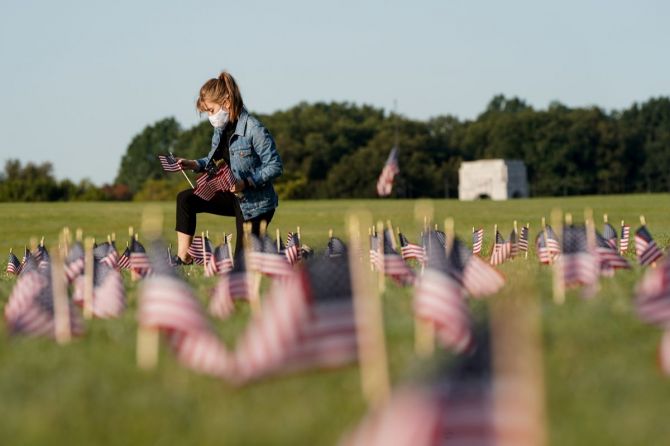 IMAGE: A volunteer places American flags representing some of the 200,000 lives lost in the United States in the coronavirus pandemic on the National Mall in Washington, DC, September 22, 2020. Photograph: Joshua Roberts/Reuters

The Modi government's record is not so bad, but there is an eerie parallel.

The Indian government also knew about the pandemic in early January.

But, inexplicably, it waited till March to declare a lockout -- March 23 to be exact -- that is, a full month after Namaste Trump/strong> on February 24 in Ahmedabad.

With the benefit of hindsight, it is possible to estimate that the lockdown in America and India was far from optimally utilised.

According to Dr Murray wearing masks alone would have made a 'huge difference' in America.

To quote from the AP report, 'The doctors said that models of the escalating pandemic showed that, unless the country adopted masks, practiced distancing and kept businesses closed, there would be 100,000 to 240,000 deaths. They stressed that if the US adopted strict measures, the deaths could remain under 100,000.'

But, 'instead of issuing a national mask mandate and other recommended measures, the Trump administration within weeks posted its Opening Up America Again plan.'

Some Americans paid attention to the doctors. But many didn't, as Trump himself refused to wear a mask in public. 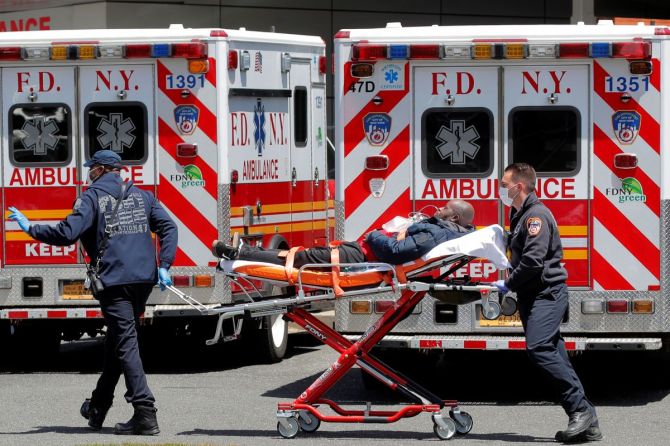 In India too, the government simply turned to more important issues and left it to the state government to struggle with the pandemic.

As a writer for MarketWatch (external link) Sadagopa Iyengar puts it, 'the government has run the gamut from total lockdown to near-normalcy. Of course, government notifications stipulate "subject to SOP" (use of masks, social distancing, etc.), thereby absolving it of any blame for the rising death toll and knowing full well that adherence cannot be ensured or enforced.'

'Predictably, buses are packed, as are shops and wholesale vegetable and fish markets, with people shopping as if there is no tomorrow, which is a very real possibility. Many do not wear a mask and the less said about social distancing, the better. The police have mopped up a tidy sum by way of fines for mask-wearing noncompliance, though social distancing is not being enforced.'

Things are really in a very bad shape and the political leadership has abdicated responsibility.

Dr Murray said there is only one way out -- people simply need to be careful.

He regretted to see instead a 'behavioural roller coaster' among Americans refusing to recognise that 'things are going to get worse.'

The haunting question remains: How will COVID-19 end?

Gina Kolata, a writer in the New York Times, toyed with the possibility that the 'coronavirus pandemic could end socially before it ends medically. People may grow so tired of the restrictions that they declare the pandemic over, even as the virus continues to smoulder in the population and before a vaccine or effective treatment is found.'