India did not create the problem. But if it had a better functioning government system, it would have been able to deal with it at lower cost to its citizens, explains T N Ninan. 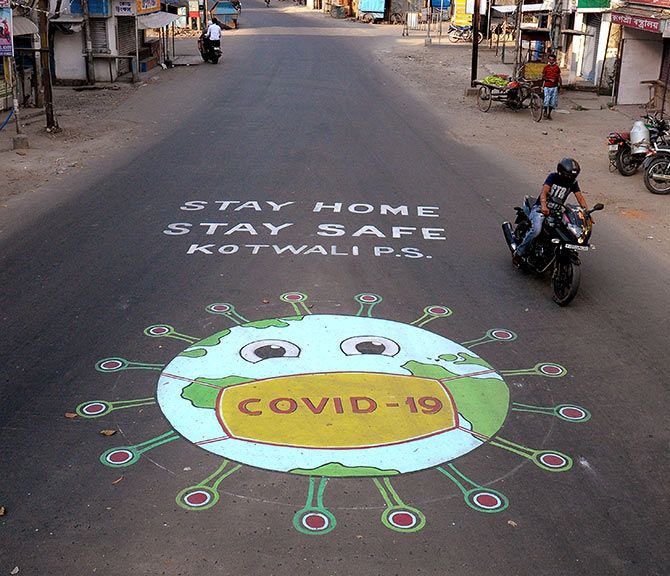 IMAGE: A message on coronavirus on a street in Nadia district, Gujarat, April 4, 2020. Photograph: PTI Photo

A crisis shows up the strengths and weaknesses of a system.

The social stability underlying India's everyday chaos was on display during the wreck that was demonetisation in 2016; people died while waiting in queues at bank branches, but there was no rioting.

And the initial failure of the police to bring the situation under control showed how much the machinery created to enforce law and order has been compromised and communalised.

The prime minister has led from the front in imposing a lockdown and warning people in blunt terms of the possible consequences of failure to observe it.

But it is state governments that have led the way to help people affected by the crisis and its economic devastation.

This is a reassuring sign, that India has strengths at different levels.

And for all the evidence of the media having been cowed or become cheerleaders, there cannot be much doubt that it is the widespread reporting of migrant workers walking to ancestral village homes hundreds of kilometres away (all passenger services having been banned) that has led to the opening of government-run kitchens and the provision of transport.

Hopefully, people can go home or stay where they are, near places where they can find work, until a semblance of normalcy returns.

The 'JAM' trilogy has certainly come in handy.

Just when it had begun to look like Aadhaar being more a menace for government control than a handy tool for transferring benefits, it has proved its worth because many of the measures that the finance minister announced in terms of handing out cash would have been far more difficult without JAM: Jan Dhan accounts, Aadhaar, and mobile phones.

The system is not perfect (and exclusions provoke crises for those affected, as experience has shown), but even with its imperfections it is a huge systemic asset.

Some of the weaknesses have also been laid bare, like the severe capacity limits of the medicare system.

This has been highlighted for decades, with commentators pointing out that (unlike in most economies with claims to having achieved some development) the bulk of the medical expenditure in India is borne privately; the State has had too little a role.

Most governments have simply not found this important enough to address, in terms of building a functional government health infrastructure large enough to meet the needs of 1.3 billion people.

Should the number of COVID-19 cases in India continue to grow at the present rate of acceleration, the system will quite clearly be overwhelmed.

Moreover, the roping in of private capacities has been delayed -- for testing and diagnosis, manufacturing the necessary protective equipment, supplying ventilators, and the like.

Hopefully, health budgets in future will show some awareness of what needs to be done.

The country's stretched fiscal situation too has operated as a constraint.

Deficits have been too high for too long, so that the national debt (while lower in relation to GDP than for many large economies) is still too high and therefore a mental constraint when the government needs to open the spending tap.

That might explain why the finance minister's aid package of Rs 1.7 trillion is not only one of the smallest in the world, but only Rs 0.6 trillion of that will be new money as one analyst has argued.

It will be many weeks and months before this black swan event gets over, and there could be lasting changes that are wrought.

As with the rest of the world, India's growth rates are now forecast to drop sharply, and there will be a price to pay in terms of employment and more limited government resources for essential needs.

India did not create the problem.

But if it had a better functioning government system, it would have been able to deal with it at lower cost to its citizens.