'He is not leader of the party in the Rajya Sabha or the Lok Sabha. He is just an MP.'
'In the order of precedence of the Republic of India, Rahul Gandhi is at 21st position,' says Sudhir Bisht. 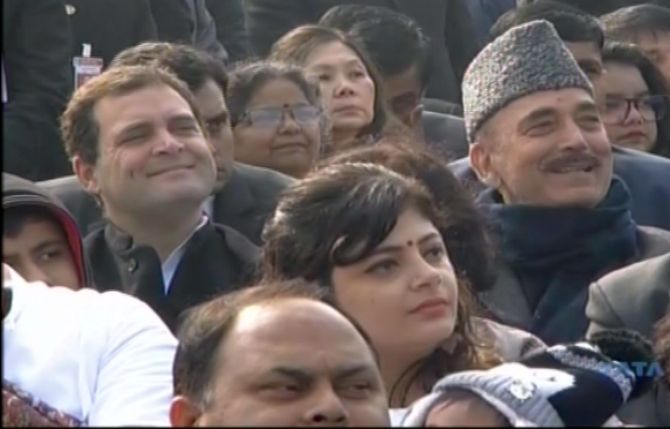 Robert Browning's monumental work, The Ring and the Book, was published in the 19th century, the work spanning over 12 books. In the 11th book titled Guido, there is a beautiful line that caught my eye.

Whine on, wail ever, 'tis the loser's right!

This sequence of simple words has such profound meaning. Whining and wailing is an acceptable form of displaying one's agony.

To open up one's wound for garnering the sympathy of onlookers is commonplace even today. It is believed that wailing helps lighten the heart and also assuages mental suffering.

Ordinary mortals like me and many readers are expected to moan and squeal and yelp and howl when wounded by the enemy in a battle of supremacy. But royalty and longstanding members of nobility are not supposed to 'whine on and wail ever'. They are expected to remain strong and show fortitude and bear their suffering in silence.

The Congress camp has been visibly smarting under the 'insults' inflicted upon them by the current dispensation over the last seven days.

But as is expected, the royal household of the Congress (you know who it means), has displayed a remarkable degree of stoicism. It is the long-lasting noblemen of the first family who are squealing and squirming, sometimes directly and other times through their friends in the media.

It all started with Israeli Prime Minister Benjamin Netanyahu's India visit. He met neither Sonia nor Rahul Gandhi.

Coomi Kapoor writes in the Indian Express in her widely read column, Inside Track: 'Israeli Prime Minister Benjamin Netanyahu did not meet Rahul or Sonia Gandhi during his recent trip to India although it is customary in diplomacy for visiting heads of States to also speak to the leader of the Opposition. This was the accepted practice until Narendra D Modi came to power.'

'As PM, Modi decreed that a meeting with the Opposition leader should not be included in the official protocol by the ministry of external affairs. When the Congress protested that this was against accepted democratic tradition, the government took shelter under the fig leaf that the Congress did not have 10 per cent of the strength of the Lok Sabha to be officially recognised as the main Opposition party.'

While I am personally unconcerned with who the Israeli PM meets and who he chooses to skip (or was requested to skip), I am amazed at the protest from the Indian National Congress.

Shouldn't the Congress party show similar emotion about their party leaders in the Lok Sabha and Rajya Sabha? No, because the alpha and omega of the Congress party are Sonia and Rahul Gandhi, not necessarily in that order though.

And why should Netanyahu stop at just meeting the Gandhis?

Should he not meet with the leaders of the Communist parties or the Aam Aadmi Party?

In fact, since Netanyahu spent considerable time in Delhi, shouldn't Arvind Kejriwal, the Delhi chief minister, get primacy over others in meeting the visiting dignitary from Israel?

The second plaint the Congress has, is that its president was allocated the sixth row in the VIP enclosure at the Republic Day parade.

The complaint is ludicrous, to say the least. Rahul Gandhi is the president of a political party.

He is not the leader of the party in the Rajya Sabha or the Lok Sabha. He is just a member of Parliament.

In the order of precedence of the Republic of India, Rahul Gandhi is at 21st position.

I should mention here that the Leader of the Opposition in the Rajya Sabha, Ghulam Nabi Azad, is the senior-most Congress leader in the list of Congressmen, coming in at the 7th position.

Rahul Gandhi was seated along with Azad, which shows he was upgraded and not downgraded by the administrators of the Republic Day parade function.

Hence, Rahul Gandhi or his close confidantes like Randeep Surjewala have no case to quarrel.

I am also told by scribes who have covered the Bharatiya Janata Party for a long time that its past presidents like Nitin Gadkari and Rajnath Singh were often relegated to the last row at the Republic Say parade. So I don't know why Congress leaders are nitpicking about Rahul Gandhi getting a seat in the sixth row in the VIP enclosure.

Here I would like to criticise the sense of entitlement that some of our netas seem to believe is their birthright and flaunt it openly.

I also feel that if Surjewala feels that Rahul Gandhi was insulted by the administration, he should have advised Rahul NOT to sit in the VIP enclosure, but to take a seat in the stands meant for the general public.

The television cameras would have kept their focus on him for this unusual act and he would have won the hearts of the hoi polloi.

I also read in the newspapers that the Congress party was unhappy that its leader in the Lok Sabha, Mallikarjun Kharge, had not been invited to the dinner hosted at Rashtrapati Bhavan.

In October 2015, the Congress boycotted the dinner hosted by Prime Minister Modi for African leaders because External Affairs Minister Sushma Swaraj had not mentioned Jawaharlal Nehru or any other Congress leader in her opening address at the Africa Summit.

Coming back to Kharge not being invited to the dinner or the 'At Home' hosted by the President on Republic Day, the government's position was clear from day one.

These frequent boycotts of official dinners and expression of anger at not being invited for official dinners is something that does not behove the large political party that has ruled the country for 64 years.

It shows the party in bad light and portrays it as a party that is serious only about petty issues that involve the false prestige of its leaders.

And for the victorious party, I just have to say what the poet-prime minister Atal Bihari Vajpayee once said: 'Victory and defeat are a part of life which are to be viewed with equanimity.'