'A false narrative is being created, that Narendra Modi is a habitual offender when it comes to lowering the political discourse in the country.'
'Nothing can be farther from the truth,' argues Sudhir Bisht. 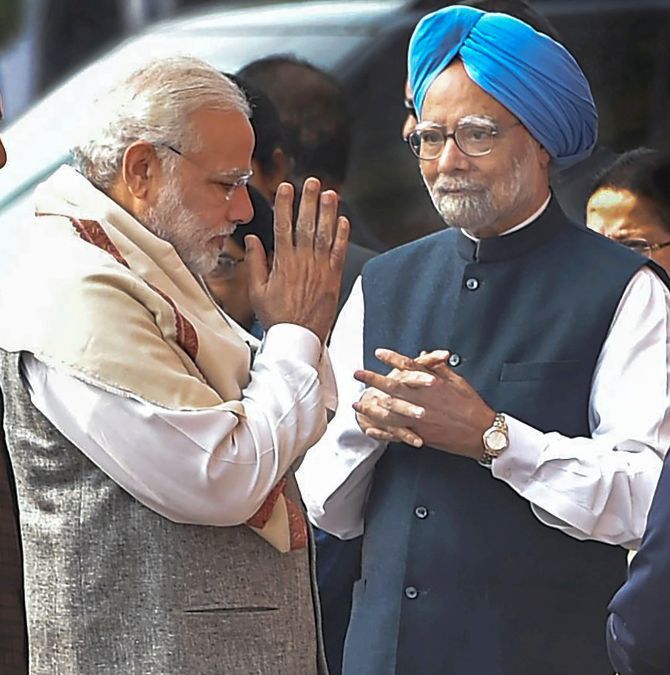 IMAGE: Prime Minister Narendra D Modi greets former prime minister Dr Manmohan Singh at the memorial event at Parliament on December 13, 2017 to mourn the lives of the security personnel who laid down their lives in the terror attack on Parliament 16 years ago.
Photograph: Vijay Verma/PTI Photo

I had said in an earlier Rediff.com column that logically the Bharatiya Janata Party should lose given the two decades of anti-incumbency, but the Modi-Shah duo will help the BJP scrape through to a narrow victory.

But this is not an article about who will win and who will lose Gujarat. This is not even about who visited how many temples and who was rechristened a 'janeu dhari Hindu' or a 'Shiv bhakt'.

This isn't about the absence of skull caps and the conspicuous display of tilak on foreheads.

This article is about which party has lowered the dignity of the Gujarat election campaign.

This article is about the narrative created by the likes of Manmohan Singh, the former prime minister, who said he was pained and anguished by Prime Minister Narendra D Modi's 'lies' about the contents of his meeting with Pakistani diplomats, serving and retired.

Dr Singh said he had discussed only India-Pakistan bilateral issues and there was no mention of the Gujarat election at the dinner hosted by Mani Shankar Aiyar.

The prime minister asked if the meeting organised by Aiyar had discussed the Gujarat election.

The prime minister has every right to question Dr Singh and his fellow Congress leaders as the meeting was organised by the man who in November 2015 told a Pakistani television channel that Modi had to be 'removed' for talks between India and Pakistan to resume.

Aiyar had even told the Pakistani television channel, 'Bring us (the Congress) back to power and remove them (the BJP).' So, whenever Aiyar meets Pakistanis, doubts will be raised for sure. This is as simple as it is.

But all hell broke loose with the PM's questions and Dr Singh accusing Modi of starting 'a dangerous precedent by his insatiable desire to tarnish every Constitutional office, including that of a former prime minister.'

The old faithfuls of the Congress party in the media were soon squirming in discomfort. Pratap Bhanu Mehta, writing in the Indian Express, said, 'The conduct of the prime minister of India during the Gujarat election should set alarm bells ringing. Narendra Modi's innuendo in an election speech in Banaskantha, in which he strung together communal canards and conspiracy theories, marks a new and dangerous low in Indian politics.'

Another false narrative is being created, that Modi is a habitual offender when it comes to lowering the political discourse in the country.

Nothing can be farther from the truth. What the prime minister is doing is a miniscule retaliation of the choicest of slanders the Gandhi family and its loyal band have hurled at Modi ever since he became PM.

Let's start with the freshest abuse that Aiyar hurled at the prime minister. He called Modi 'neech', which literally means someone who is born in a low caste.

Aiyar speaks chaste Hindi and can give a lesson or two to any North Indian politician in manipulating language to hit opponents below the belt. He has been close to Sonia Gandhi. That's probably why he survived in Dr Singh's Cabinet in spite of being at loggerheads with then PM. So what Aiyar says is something that has to be taken seriously.

Didn't Rahul Gandhi single Aiyar out for praise at a party meeting a few years ago? The fact that Rahul suspended Aiyar from the party's primary membership is an eye-wash. Aiyar will be back soon, with renewed gusto.

The most disparaging comment on Modi came from Rahul Gandhi's second most revered political guru in Gujarat.

It is well known that Alpesh Thakor -- the self-styled champion of the OBC community -- and Hardik Patel -- the self-styled leader of the Patidars -- have been virtually outsourced the Congress leadership in Gujarat by Rahul Gandhi.

On Tuesday, December 12, Thakor ridiculed Modi for having acquired a light skin after gobbling up mushrooms from Taiwan. Modi, Thakor alleged, was as dark in complexion as Thakor, but gained a fair complexion after consuming the mushrooms that cost Rs 80,000 apiece.

Thakor's support base is supposed to be the cornerstone of a Congress victory in Gujarat, and Rahul Gandhi has done nothing to scoff at Thakor's offensive remarks.

Going back further in time, Digvijaya Singh -- Rahul Gandhi's former mentor and currently a full-time devotee of the Narmada river -- posted one of the ugliest memes on Twitter that accused Modi of making his followers 'complete idiots'.

Well, the word 'idiot' is being used by me here because the exact word Digvijaya Singh used is too distasteful, too putrid and too full of squalor.

The same Diggi Raja, as Digvijaya Singh is affectionately called, had said in May 2014 that he was not a 'coward' like Modi who had been hiding his wife from the public. Can there be anything more personal than this remark made by this loyal regent of the Gandhi family?

There have been more attacks on Modi, scathing and slanderous by eminent leaders of the Congress party. Mallikarjun Kharge, the leader of the Congress in the Lok Sabha, had used a canine analogy for the BJP and the Sangh Parivar in the House.

I distinctly remember that in the run-up to the 2014 Lok Sabha election, Modi was asked to comment on Priyanka Gandhi and he had said that she was a daughter who would defend her mother (Sonia) and that he had no problem with that. This was misinterpreted by the media as if Modi had said that Priyanka was like a daughter to Modi.

Even if Modi had said that Priyanka was like his daughter, it shouldn't have been looked upon with disgust and annoyance.

But Priyanka rebutted strongly, saying that she was Rajiv Gandhi's daughter. As if Modi was not worthy of even having fatherly feelings towards the Congress party's royal princess!

Priyanka's brother had insinuated that the BJP was doing khoon ki dalali of jawans. A rough translation would be that the BJP was leveraging the deaths of Indian soldiers for narrow political gains.

Don't these utterances lower the dignity of public discourse?

Since I started this article by the former prime minister's false accusation against Modi, let me end by saying that Dr Singh is a consummate political animal.

He is far from the retiring, gentle, avuncular statesman who is the epitome of dignity. He has much more politicking skills in him than he is credited for.

Manmohan Singh doesn't squirm when he is asked to be obsequious to Rahul Gandhi who is half his age.

He has no qualms in terming demonetisation as 'organised loot and legalised plunder', not soft criticism by any standards.

But he has problems if Modi seeks details of his closed-door meeting with Pakistani diplomats.

So Modi paid Dr Singh back in the same coin.

Narendra D Modi, the earthy, tough, leader, has decided to give back more than he gets!