If Vastanvi had blundered in appearing to praise Modi, his detractors, such as the pro-Congress Madnis, were no less blameworthy, being closely linked with a party that was no less anti-Muslim than the BJP, says Yogi Sikand

A number of newspapers are now coming out alleging that members of the politically influential Madni family that has been controlling the Dar ul-Uloom at Deoband for decades are the actual brains behind the ongoing slander campaign against the newly-elected rector of the madrasa, Ghulam Mohammad Vastanvi, in a desperate bid to unseat him.

The campaign is directed, say these papers, at putting the pro-Congress Arshad Madni in Vastanvi's place so that the Madni family's stranglehold on the madrasa is thereby preserved.

Arshad Madni is the brother of the late Congress member of Parliament, Syed Asad Madni, who held the strings of the Deoband madrasa for many years till his death in 2006, and who was able to attain that position with the blessings of the Congress by engineering a violent coup that resulted in the ousting of the then rector of the madrasa, Qari Mohammad Tayyeb, which marked the first major split in the Deoband madrasa. It now appears that Asad Madni's successors, his son and brother, are faithfully carrying on in the tradition that he had established, of seeking to wreck India's most influential madrasa simply to feather their own nests.

Arshad Madni was also a contender for the post of the madrasa's rector, but narrowly lost to Vastanvi (whose daughter his son is married to).

Interestingly, according to some sources, Arshad Madni, has now patched up with his arch-rival, Mahmood Madni (son of Asad Madni), whom he had been at stiff loggerheads with ever since Asad Madni's death. No sooner had Asad Madni been laid in his grave than the two entered into a fierce battle over the mass-based Deobandi organisation which, in effect, controls the Deoband madrasa, the Jamiat ul-Ulema-e Hind, the leader of which styles himself as the amir ul-hind ('head of India'). Their ugly spat led to a protracted case in the courts (curiously, they chose not to resolve the matter in the mullah-run dar ul-qazas that the Jamiat has been tirelessly appealing to Muslims to resort to solve their disputes), and occasioned a momentous split in the Jamiat, leading to the setting up of two rival wings, each of which claimed to be the sole, real Jamiat ul-Ulema-e Hind.

The nephew and uncle are both enormously influential political big-wigs. Mahmood Madni was first with the Congress, but finding it unwilling to patronise him as he wished, switched to Mulayam Singh's Samajwadi Party, but soon abandoned even that as well for the Rashtriya Lok Dal, which rewarded him with a seat in the Rajya Sabha in the hope that he would supply the party with Muslim votes. For his part, Asad Madni is said to be very close to the Congress party.

According to inside sources, the ongoing anti-Vastanvi stir is being furiously stoked by the two estranged Madnis, which might mean that they are willing to patch up in order to prevent the Dar ul-Uloom, which they are accused of treating as their family fiefdom, from going into the hands of an outsider like Vastanvi. It is rumoured that Mahmood Madni might readily support Arshad Madni's effort to unseat Vastanvi and become the rector of the Dar ul-Uloom, in return for being recognised by him as the unchallenged head of the Jamiat ul-Ulema-e Hind, which presides over a vast following and a huge financial empire.

That Asad Madni is going out of his way to court Congress support is clearly evident from the meetings he has had in recent days, soon after the launching of the anti-Vastanvi campaign, with Manmohan Singh, Sonia Gandhi and Kapil Sibal, which the Urdu press has widely reported. Some Urdu papers leading the campaign against Vastanvi and backing Arshad Madni in his place claim that in these meetings Arshad Madni stridently complained to these Congress heavy-weights about the continued discrimination against Muslims. In this way, these papers are building up the image of Arshad Madni as supposedly being deeply committed to the Muslims' cause and concerned about their plight, although it is well known that the man has done precious little at all for the community.

Another key figure whose name has cropped up in the ongoing controversy is the millionaire Badruddin Ajmal, member of Parliament from Assam, who is a member of the Deoband madrasa's governing council. He is said to be a strong backer of Vastanvi, for which he is said to be stiffly opposed by the Madnis. It is rumoured that the anti-Vastanvi faction might, in return for Congress support, actively campaign against Ajmal's United Democratic Front in Assam to ensure that Muslim votes there accrue to the Congress.

According to informed sources, despite the slander campaign unleashed against Vastanvi, accusing him of being a Hindutva agent and worse, a large section of the students of the Dar ul-Uloom desperately hope that he will be allowed to stay on as rector. Inspired by the number of forward-looking modern and professional educational institutions that Vastanvi runs, in addition to the scores of madrasas that he patronises, they hope that he might bring about desperately-needed reforms in the Deoband madrasa itself, and, through it, in the many thousands of madrasas affiliated to the Deoband school of thought throughout India.

They point out to the fact that under the Madni family, the Deoband madrasa has greatly stagnated and that it continues to remain cut off from modern developments, leaving its graduates hopelessly ill-equipped to navigate the rapidly changing world in which they find themselves. They insist that folk like the Madnis, as well as political parties -- not just the Bharatiya Janata Party but even self-styled 'secular' parties such as the Congress -- actually want Deoband to remain unreformed, for only then can they continue to play their sinister politics in the name of religion and communal interests unchallenged.

Were reforms to be introduced into the portals of the institution, such as what Vastanvi intends, the empowerment of the Muslims that it would lead to would, they say, effectively challenge the sordid Muslim politics of the Congress (and, of course, the Hindutva camp) and, at the same time, would also gravely undermine the politics of arch-conservative mullahs like the Madnis who have a vested interest in keeping Muslims (and the Deoband madrasa itself) backward -- economically, educationally and intellectually.

Vastanvi's critics have accused him of being a 'political man' and, hence, of being unsuitable for the post of rector of the Dar ul-Uloom. Curiously enough, Vastanvi's supporters are beginning to point out, the men behind the campaign for his ouster, most notably the Madni duo, are themselves crafty political mavericks.

Writing in a recent issue of the Urdu Hindustan Express, Fuzail Ahmad Nasiri, a graduate of the Deoband madrasa, pointed out that critics of Vastanvi, who pounced on his alleged pro-Modi statement to push for his ouster, forget that many Deobandi maulvis have been consistent supporters of the Congress, a party that has itself been responsible for numerous anti-Muslim pogroms.

It is not just the BJP, but the Congress, as well, whose hands are stained with Muslim blood. It was the Congress that engineered the destruction of the Babri Masjid, and that it was the Congress that was principally responsible for the sharp deterioration in Muslim conditions throughout its many decades of misrule, Nasiri pointed out. In other words, if Vastanvi had blundered in appearing to praise Modi, his detractors, such as the pro-Congress Madnis, were no less blameworthy, being closely linked with a party that was no less anti-Muslim than the BJP.

If truth be told, Vastanvi's case was not exactly strengthened by some of his supporters, who struggled to defend his controversial statement on Modi. It is true that his ridiculous comments was totally uncalled for and even factually incorrect, and it might be that he was impelled to utter them simply in order to win Modi's favour to protect the chain of institutions that he runs in Gujarat. It is also true that such comments can be extremely dangerous in that they can easily be misused to whitewash the crimes of Hindutva fascists in Gujarat and elsewhere.

Yet, to claim that they clearly indicated that he was a 'Modi agent', as some Urdu papers did, seems utterly far-fetched. It certainly did Vastanvi's case no good when key BJP Muslim faces, such as Najma Heptullah and Syed Shahnawaz Husain, appeared to speak out in his defence. Vastanvi can well do without such 'well-wishers' who, by appearing to defend him (and by also falsely claiming that Muslims are prospering under Modi), will only strengthen the case and appeal of his detractors, who are sure to use their comments to further reinforce their probably wholly untenable claim that Vastanvi is a 'Hindutva agent'.
Yogi Sikand
Related News: Ghulam Mohammad Vastanvi, Arshad Madni, Muslim, Congress party, Asad Madni
Print this article
The good that madrasas do goes unnoticed
Cult for the communal
Sachar report: Myth and reality 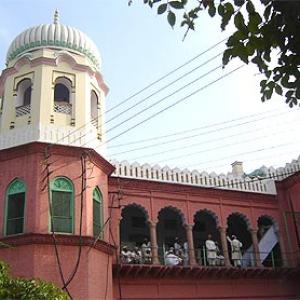