The nexus of sports, business, and politics

Before venturing forth into the quicksand of allegations that is the Kochi IPL let us lay out two clear markers to guide us through the murky waters.

First, Shashi Tharoor's private life is just that -- private -- and nobody's concern bar his own.

Second, Lalit Modi is not an idiot.

Quite frankly, I deplore the manner in which the issue of ownership of the Kochi IPL team is being treated by my journalistic brethren, where the chief focus seems to be Sunanda Pushkar. It is poor journalism as it verges on the voyeuristic -- and it is doubly wretched reporting because it is misdirected.

That said, questions were always going to be asked about the persons behind the Kochi IPL franchise. Take a look at the other franchises and you can easily understand why. The public knows -- or thinks it knows -- who provides the financial muscle that underpins the cricketing feats.

Unless you have been living on Mars you have heard of the Ambanis of Reliance, owners of the Mumbai Indians team. India Cements has been involved with cricket in Tamil Nadu long before the IPL was a twinkle in Lalit Modi's eye; thus its floating the Chennai Super Kings came as no surprise. The Bangalore Royal Challengers make a perfect fit with the image of Vijay Mallya's high-flying business empire. The GMR Group has been putting its best foot forward in Delhi ever since winning the bid to remake the airport. The Deccan Chronicle's association with Hyderabad is known to all, and the Deccan Chargers' name reflects its ownership. The Sahara Group, owners of the new Pune franchise, are longtime sponsors of the Indian cricket team itself. And while Preity Zinta may be the most visible face of the Kings XI Punjab, it is no secret that the other owners are Ness Wadia (Bombay Dyeing), Mohit Burman (Dabur), and Karan Paul (Apeejay Surrendra).

These are all well-known business houses. Red Chillies Entertainment, which picked up the Kolkata franchise, may not boast as old a history but its owners -- Shah Rukh Khan, Juhi Chawla, Jay Mehta -- are familiar faces. Even the Rajasthan Royals' owners turn out to be quite well-known  -- Lachlan Murdoch, for instance (son of the global media baron Rupert Murdoch), with Shilpa Shetty and her husband picking up a stake later.

It is in this context that we have to see the questions being asked about Rendezvous Sports, which owns a 26 per cent stake in the Kochi franchise. (Of the remaining 74 per cent, a quick scan turns up only one name that seems directly connected to Kerala -- that of businessman Vivek Venugopal, and he owns just one per cent.) Rendezvous Sports in turn spread the goodies around, with Sunanda Pushkar getting a 19 per cent stake (currently valued at about Rs 70 crore). Without a well-known face in the crowd, people were always going to wonder just who constituted Rendezvous Sports and where they got the money to spend on buying a franchise.

This is where Shashi Tharoor enters the picture. He, by his own admission, played the part of a "mentor" to the group. Can he explain just who they are? Come to that, why did he get involved in the first place?

The IPL is not a public sector undertaking but a private enterprise. At its heart it is about making money, not sporting excellence. "I am just a businessman and have absolutely no interest in cricket," Mukul Patel, one of the members of the Kochi IPL consortium, confessed to a newspaper. That is a far cry from India Cements' long association with Tamil Nadu cricket!

Why do people who flaunt their indifference to cricket get involved with the IPL? Why else but to make money?

The IPL franchises are not getting bountiful returns on their money right now. But if there is no great revenue flow there is definitely plenty of capital appreciation.

That is a distinction that anyone who enters the share market can understand. When you buy shares you don't expect to get rich through dividend payments; what you hope is that you can sell your shares for a tidy profit some time down the line.

The Rajasthan Royals offers a perfect example of how this works in the IPL. In 2008 Lachlan Murdoch and his partners in Emerging Media paid US $67 million for the franchise. In 2009 Shilpa Shetty and her husband, the British businessman Raj Kundra, bought a 11.7 per cent stake. That would have meant paying US $7.839 million at the original valuation; they actually paid US $15.4 million -- meaning the original investors made a nice packet in the first year. It also meant the franchise was valued at over US 130 million, doubling in value in under twelve months.

Emerging Media evidently made a smart business move but remember that it was they who pocketed the difference. Did the Rajasthan Cricket Association get anything out of the deal? Come to that, how exactly does the presence of the Rajasthan Royals help the local cricketers?

Take a look at the Rajasthan Royals' current squad. The Indians on the list turn out for Goa, Vidarbha, Hyderabad, Baroda, and so on -- but who represents Rajasthan proper? Similarly, there is no guarantee that Kerala's own cricketers shall benefit by the presence of an IPL franchise.

Shashi Tharoor's supporters say that he bought the IPL franchise to Kochi out of his love for cricket and his love for Kerala. Fair enough, but will it actually help either the state or the game?

Kochi has no cricket stadium worth the name. Will the new franchise pay a single rupee for upgrading the current one -- or will it be left to the slender resources of the municipal corporation and the Kerala Cricket Association? And if entertainment tax is waived -- as it has been by the Congress ministry in Maharashtra -- how does the state benefit at all?

Let us stand back and take a look at the big picture. There is a group of businessmen, of whom only one -- Vivek Venugopal -- seems connected with Kerala. (And he seems to be the single smallest investor.) 26 per cent is held by a group of whom little or nothing is known.

Money will have to be spent on upgrading the facilities but the eventual profits may flow into the pockets of businessmen with no reported interest in cricket. (The Kochi franchise was bought for US $333.3 million; how much do its non-cricket loving owners hope to make down the line if they sell?)

Should a member of the Union council of ministers really act as a "mentor" to anyone in such circumstances?

This is where Lalit Modi enters the picture. Give the man his due, even his foes admit that he knows all about money. He also knows that you don't pick a fight with a Union minister on a whim. Finally, as IPL commissioner it is his duty to all stakeholders to ensure that no questions are asked about the source of funds flowing into the IPL's coffers. Put those facts together, and you wonder why he took on Shashi Tharoor so publicly, do you not?

It would be easy for the Kochi IPL owners to squelch all rumours. Did Rendezvous Sports go to some bank with its business plan? If yes, why don't they just say so? And what services exactly did Rendezvous Sports provide to the consortium? These are legitimate questions, and ones that may interest even the tax authorities.

Shashi Tharoor says he has no financial dealings with the Kochi IPL franchise. I believe him. I don't question either his honesty or his personal life but was it really worth a minister's time and effort to help out a group of businessmen?

At the end of the day this is not about any individual but about the nexus of sports, business, and politics. Lalit Modi has raised questions; like it or not, answers must be forthcoming. 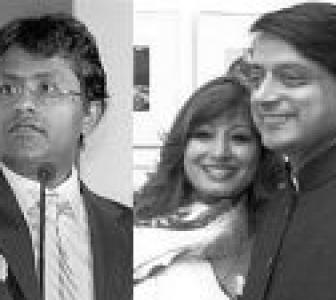 Tharoor leaves Congress on a sticky wicket
Action against Tharoor after getting all the facts: PM
Kochi IPL franchisees knock Sonia's doors

The curious case of Tharoor and Kochi franchise

Lalit Modi in showdown with Rendezvous