News
Business
Movies
Sports
Cricket
Get Ahead
Money Tips
Shopping
Sign in  |  Create a Rediffmail account
Rediff.com  » News » A diplomat and a politician

A diplomat and a politician

T P Sreenivasan remembers Ambassador SK Singh, a dominant figure in the Indian Foreign Service and the governor of Rajasthan and Arunachal Pradesh, who passed away on December 1.

Ambassador SK Singh was short in stature and had a squeaky voice, but he stood tall and made his voice heard as a diplomat and as a politician. As a diplomat, he was known for being politically savvy and always at home among politicians of all hues. After he left the Indian Foreign Service and dabbled in politics, he deployed his diplomatic prowess to be a successful governor in Arunachal Pradesh and Rajasthan. He had his ups and downs, but he remained calm and confident in adversity.

Ambassador Singh was a dominant figure in the IFS during much of my career, though I worked directly under him only when he was foreign secretary and I was joint secretary (UN). He was already a legendary official spokesman when I reached South Block. Though he operated from the Shastri Bhavan, he was visible everywhere and was recognised as a guide and a guardian by the New Delhi press corps. He was clearly a role model for us at that time even though we knew very little of his work.

I saw him in action first when he was additional secretary (UN and AD) and I was special assistant to Foreign Secretary Jagat Mehta. He was quite a popular figure not only because he held charge of two very important divisions in the ministry, but also because he was close to the powers that be. Everybody seemed to be friendly with him, but nobody seemed to know what his next move would be. He was loyal to Jagat Mehta and served him well at a difficult time when Mehta was eased out of the ministry. When efforts were made by some to change my posting to New York after Mehta moved out, he gave me solid support and made sure that I went to New York. He was gracious and generous whenever I travelled with him to Latin America and other places from New York.

His outstanding work in Vienna was well remembered when I reached there, though he had acquired the reputation of a manipulator in the UN system. His earlier experience in New York in the Fifth Committee and the powerful Advisory Committee on Administrative and Budgetary Questions came in handy for him to use the UN system to plant his favourites there and to get close to the high UN officials. He got the Vienna residence and chancery renovated and refurbished. Though the residence was maintained well by his successors, the office was allowed to deteriorate and it took me my full term to make it worthy of the Indian mission. He was a legend in many ways in Vienna.

SK Singh was a bit restless in Vienna as he was away from the scene of action, where he always wanted to be, and his appointment to Islamabad was a bonanza for him. He made such a mark in Islamabad that it was rumoured that Prime Minister Rajiv Gandhi would appoint him foreign secretary by superseding colleagues like AP Venkateswaran and KPS Menon. But his elevation came only later, at the fag end of Rajiv Gandhi's tenure as prime minister.

As foreign secretary, he gave me full support during the political crisis in Fiji. But it was obvious that he approached every issue from the perspective of the Congress party winning the elections. When the military government in Fiji ordered me out since India had not recognised it, he was in panic because he thought that the event would affect Rajiv Gandhi's election prospects. I told him that the Fiji policy should be projected as a success, but he was not too sure of it and his instinct was to hush up my expulsion.

Life as foreign secretary became difficult for him when VP Singh became PM and IK Gujral became foreign minister. I had seen how much he used to needle Gujral when he was ambassador in Moscow and Singh was dealing with administration in the ministry. Gujral was not comfortable with Singh and prematurely replaced him with Muchkund Dubey. Singh was told that he would be appointed governor, but nothing was done till the Congress came back to power. With all his talent and experience, he continued as governor till his very end.

SK Singh remained a bachelor till he became an ambassador and had small children when he was foreign secretary. But he was obviously a loving husband and a fond father.

Singh was in many hot spots during his career for no fault of his, but the joke at that time was that any country would go up in flames if he went there. When he was appointed foreign secretary, someone wrote that everything was ripe for a revolution in India and it would explode the moment Singh arrived on the scene!

SK Singh had many qualities of head and heart and his was a successful life both as a diplomat and as governor. He had his detractors, who thought that he was a master manipulator, but he will be remembered with admiration and affection by his friends and colleagues. 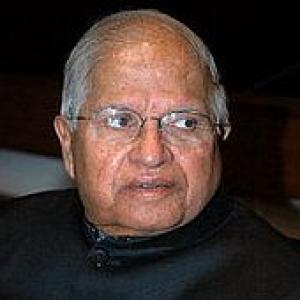