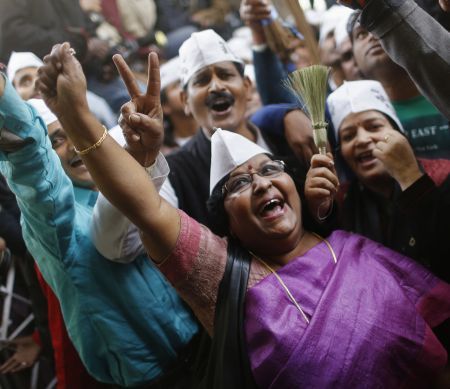 There is a leader in every man waiting for the right moment. The Aam Admi Party has found it and is already ready with its list for the Lok Sabha. The challenge is enormous, but the future beckons the way it had never before, feels sociologist Shiv Vishvanathan.

History produces surprises that neither politics nor policy can grasp. Sometimes it is not the mere newness of the event that is destabilising, it is more difficult to domesticate the consequences.

The event almost becomes indigestible especially to an elite which has long domesticated the corruption of both Congress and the Bharatiya Janata Party. Suddenly, an upstart haunts their imagination and threatens their world.

A South Delhi, used to power, name and status suddenly finds itself facing hoi-polloi. When they asked who is Aam Admi, theirs was not a question about identity, but a quest for similarity. Both the BJP and the Congress, as they confessed, created people like us, but it was the AAP which was threatening to be different.

The newness and difference of an event can turn it alien. Delhi has suddenly discovered the alien within it forcing it to ask who or what is this party of unknowns. The elite almost feel as if its domestic servants or new migrants have turned into MLAs.

In politics, it is not familiarity that breeds contempt. Familiarity creates conviviality. Even your opponent and rival to power provide a sense of domesticity.

Both the BJP and the Congress shared the conviviality of power. What the elite in these parties face is now a collection of upstarts.

This event is new. Usually, a hung Parliament would create musical chairs where MLAs can be seduced or bribed. The whole event is a great opportunity -- but what one witnesses is a virtual political coyness. The Aam Admi spokesman says quietly that we shall not covet power, the people did not elect us to play such games.

Such propriety is unheard of in our time. Giving in to temptation seems the first act of electoral power. A party that decides to wait patiently performing the constructive role of opposition seems like a party of the future.

Suddenly a party that began as a mere rumour or even a hypothesis is now a fact. It promises to escalate from locality to nation. This politics of scaling up is now going to be its second major challenge.

One has to ask, is the AAP a local phenomenon or is Delhi to be a microcosm of a future India? Does the AAP have to replicate itself or does it have to reinvent itself in plural ways?

Its future strategies invite certain playfulness. One is reminded of a famous novel, The Secret of Santa Vittoria, by Robert Chrichton. It is a book about the German occupation of an Italian village where the resistance is led by an ordinary man. Even his wife thinks Italo Bombilini is a prize idiot.

When he is elected mayor, everyone is surprised. When he is asked whether he has a team, Bombilini produces a list instantly. There is craft and thought in it and the village realises that he has prepared for this moment a long while ago.

There is a leader in every man waiting for the right moment. The Aam Admi Party has found it and is already ready with its list for the Lok Sabha.

Sociologically, one can play wet blanket and write off the AAP as a one-off phenomenon. To do this would be to discount the inventiveness of democracy. It is true that theb AAP is currently an urban middle class party. But its social background need not necessarily be its future obituary.

The middle class has also powered the great social movements from Nationalism to Naxalbari. A part of the middle class may be aspiring and mobile, but another part might be caring and sensitive to new forms of problem solving. It might create a new inventiveness of citizenship by providing the other half of the Arab Spring, a theory of governance and electoral representation.

The challenge, as I see it, is two-fold. The first ring includes the rest of the so-called Hindi Heartland as the AAP moves into Haryana, Bihar, and Uttar Pradesh. The second is a move to the South.

The first strategy has to be the killing strategy. One has to challenge a Mulayam Yadav and Akhilesh speak about his violence and his corruption. This has been one of the untold stories of Indian politics.

Bihar has always responded to Jayaprakash Narayan and the AAP becomes the second JP movement challenging the Laloos and Nitish Kumars to battle.

The AAP combines the effervescence of the old with the clarity of the new. The AAP can look at marginality and governance in a way Nitish cannot. It can recreate the wisdom of the social movements and the experiments in civil society to create new offering of governance.

People I think are ready for it as they were for Mamata. It is not just that the AAP is new -- it is India, young and old, which is ready for the new. Nitish, in that sense, is yesterday's newspaper.

The perception that the South is another country with a different grammar of politics can be overdrawn. The great movements like DMK are dead or self-serving. The trail from C N Annadurai to M K Alagiri says it all. The AAP is not invading the South, it is inviting it to add value, to look at common problems and new solutions.

I think youth will respond and new coalitions with exciting possibilities will emerge.

Governance and marginality might combine with new dialects of justice to create a plural framework of possibilities.

I confess this needs strategy, imagination, generosity and openness to new ideas. The AAP has to invent and be constantly inventive, surprising India with new agendas of politics.

There are dangers here. It must avoid the politics of populism and resentment. The Koli episode where AAP volunteers barged into a Congress rival's house has shades of it.

The AAP has demonstrated that it knows the difference between populism and democracy. Populism can play to majoritarian violence or calculated minority sentiment. Laloo is populist, but populism destroys democratic values and governance in the long run.

The AAP has to talk truth to power even when in power. It need not contest all the seats, but create a learning curve as it moves up the India gradient. It has to have greater impact and presence and excite the young and indifferent to see politics as a form of enabling and empowering activity.

In achieving this, it might create a more Gandhian vision suited to our times, combining a touch of Vaclav Havel, Kejriwal and The Mothers of Argentina becoming as it were the collective wisdom of the last few decades of dissent.

The challenge is enormous, but the future beckons the way it had never before. That much is hope and politics cannot ask for more.