Congress leaders have put the party on life support in Maharashtra 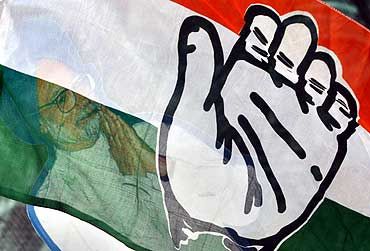 A divided party -- not the quashing of the Adarsh report -- will spell doom for the Congress in Maharashtra, argues Neeta Kolhatkar.

The Opposition in Maharashtra led by the Shiv Sena and the Bharatiya Janata Party had demanded tabling of the Adarsh Commission report during the state assembly's winter session.

The Adarsh Commission, headed by retired Bombay high court judge Justice J A Patil, had termed the role of three chief ministers and some bureaucrats in the allotments in the Adarsh housing society as 'nefarious'.

As expected, the Congress-led Democratic Front government trashed the report, saying the state cabinet has resolved not to table it in the assembly.

The Congress young brigade promptly condemned this action, demanding that a probe needs to be initiated if the Commission had named any important minister or official.

Union Minister Milind Deora, the Member of Parliament from the Mumbai South constituency who is part of the Rahul Gandhi brigade, spoke out against his party colleagues, including 'Mr Clean,' Maharashtra Chief Minister Prithviraj Chavan.

Chavan had tried to distance himself from the Adarsh episode, blaming the cabinet (which he heads) and worse aired these sentiments publicly.

The reason for Deora's outrage is being attributed to the impact on next year's general election.

Deora is obviously worried -- Colaba (where the Adarsh building is located) falls within his constituency.

The Nationalist Congress Party, a constituent of the state government, has been belligerent, since most ministers named in the Adarsh report are from the Congress.

The NCP squarely blamed Chavan for taking the decision not to table the Adarsh report in the assembly. This political tamasha will impact the Congress's image.

The quashing of the Adarsh Commission report may not have a direct impact on the election. Not many voters know the real details of the report. Many may have taken the issues raised by a leading national daily newspaper as the truth.

Further, there is an innate hypocrisy in the elite English media and certain politicians in defending an illegal structure, the Campa Cola building, while demanding action against those involved in the Adarsh controversy.

The members heading these commissions are often officials hand-picked by the government, and the reports are usually favourable.

In Maharashtra, however, we have often seen commissions take their jobs seriously, pin down even ministers, and suggest punishment -- like the Srikrishna Commission, which probed the 1992-1993 Mumbai riots, did or the Adarsh Commission has done.

State governments have used their right to not table and reject these reports. Usually, the impact of the rejection of a report does not impact an election directly.

It is important to symbolically restore public faith in the government by initiating action against leaders or officials said to be allegedly involved in a breach of the law.

If we want clean governance and restore public faith in our system, then the truth about the whole issue needs to be brought out first.

There are layered politics and dynamics that led to certain lobbies working against the Adarsh housing society -- these include differences between the navy and the army; the differences between two generals which was the reason for leaking erroneous information, claims that are not supported by any documentary evidence; the fact that getting an allotment or being selected to become a member of this society was not illegal for all people.

Not all were aware anything illegal was going on. Certain officials and ministers seem to have aided the construction of Adarsh, but there are many innocent buyers of apartments in the controversial building.

The courts will hopefully tackle issues raised by the Justice J A Patil panel report. After the Srikrishna Commission report was rejected by the then state government, action was still initiated against the accused.

However, one question remains unanswered: On the one hand a media and public relations campaign has demanded sympathy for residents of the Campa Cola building, which was illegal from day one and many investors apparently knew of this, but we want another structure pulled down only because politicians and bureaucrats invested in it.

This hypocrisy gets us to presume that all politicians are corrupt and that the public is clean.

Thankfully in Maharashtra, the social activist lobby, strongly opposed by the politicians, is active and know how to use the law.

Some activists like former information commissioner Shailesh Gandhi have sought information from the governor and the Maharashtra government the reasons for giving a clean chit to those involved in the Adarsh controversy.

The Congress's woes will not increase or decrease by trashing this report, but more by the public perception that the party is not united.

The Congress needs to learn from the BJP that has stood by its prime ministerial candidate Narendra Modi, whether in the Gujarat snooping case or the 2002 riots cases.

Congress leaders in their rush to look clean have put the party on life support in Maharashtra.