It's time to sack Mamata!

'If the Modi government doesn't act now, it will demoralise and hurt the people who voted in hope of a better times,' argues former BJP MP Tarun Vijay. 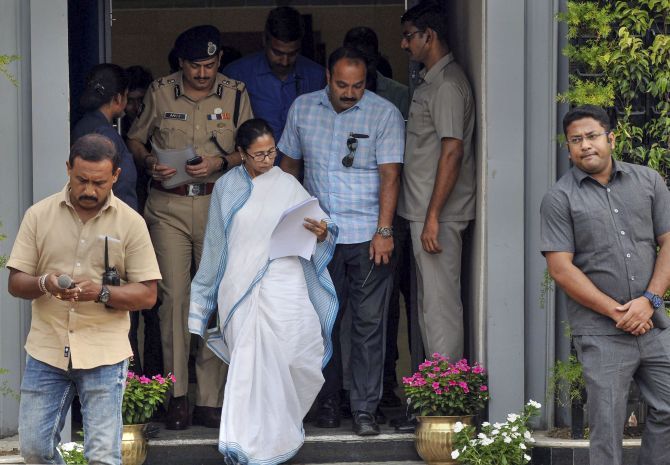 How many more innocent soldiers of democracy should die so that the government thinks it is a fit case to impose President's rule in Bengal to save it from total chaos and misrule ?

The last two years have seen the worst period in Bengal since the infamous Calcutta killings and the Naxalbari violence.

Sixty-eight Bharatiya Janata Party workers were killed before the elections and now reports say 10 have died after the results. They were all Indians and soldiers of a democratic change.

No government worth its name can tolerate such a chaotic, anarchic, situation in one of its states, no matter its size and population.

Mamata Banerjee has lost all control over the government machinery, and the grace to govern.

She speaks the unspeakable and does the unthinkable.

People voted for the BJP in large numbers, shocking everyone, to emphasise an urge to bring relief and the healing touch to a bleeding Bengal.

If the Narendra Damodardas Modi government doesn't act now, it will demoralise and hurt the people who voted in hope of a better times.

The sins of misgovernance in Bengal resulted in:

It also invoked Article 324 of the Constitution to order an end to campaigning in nine constituencies in the state a day ahead of schedule, in the wake of the violence between BJP and Trinamool Congress workers.

2. Rajiv Kumar, additional director general, CID, was relieved from duty and asked to report to the Union ministry of home affairs.

Kumar was previously the Kolkata police commissioner and faces a CBI enquiry in connection with the chit fund scam in Bengal.

3. Mamata Banerjee got a farmer arrested for asking an inconvenient question regarding help to farmers. She arrested two professors who made a cartoon of her, banned Durga Puja immersions to facilitate Moharram processions; and was infuriated over the mere chant of 'Jai Shri Ram'.

4. Her diatribes against Prime Minister Modi were in bad taste and betrayed a deep-rooted insecurity and hatred for a leader who was seen as successfully challenging her misrule.

5. Sensing defeat, TMC workers unleashed a reign of terror in their areas of influence. Several BJP workers were killed and their bodies found hanging from trees, a sad reminder of medieval savagery.

6. Even an innocuous phone call from the governor regarding the law and order situation was looked at by her as a 'threat'.

7. She showed no sensitivity for any of her state's citizens when they were begging for safety and a mother's healing touch.

She rose to power on the slogan of Ma, Maati, Manush -- mother (women's safety), motherland (respect for the common man on the ground), and people (human values). But at the end she has proved to be a colossal failure.

Her government has failed to protect women, provide protection to the common people and turned into a dehumanised political machine that devours its own people.

There was a time when Mamata Didi spoke against the CPI-M's barbaric political violence.

Today she has become a worse ruler than the Communists.

Tarun Vijay, former member of the Rajya Sabha, was the chief editor of the RSS weekly, Panchjanya, for 20 years.