If people don't hold Parliament accountable, who will?

By Dr Rohit Pradhan
May 28, 2012 21:20 IST
Parliament is essential to the success of Indian democracy and the citizenry should be in the forefront of demanding reforms which can strengthen its functioning, feels Rohit Pradhan.

Earlier in our series celebrating 60 years of Parliament:
Aakar Patel: Parliament's role in making India a great nation is over
Subhash Kashyap: People feel that for our MPs the nation comes last
Arvind Kejriwal: MPs are bonded labour of their parties
Shashi Shekhar: Nothing diminishes the fact that we are a Great Nation
Rajeev Srinivasan: Parliament: Is it worse than it looks?
Suresh Prabhu: The glue that keeps the country together
T V R Shenoy: Let us not pretend that our system is flawless

On May 13, India celebrated the 60th anniversary of her Parliament with a special sitting of the august body. Few would have predicted in the 1950s that in a country with experience of only monarchies and colonialism, democracy would sustain for 60 years.


Against all odds, an impoverished country has largely retained her faith in representative democracy; perhaps as importantly, the Indian State -- despite multitudes of weaknesses -- has shown a remarkable capacity for endurance.

As the veritable face of democracy, the importance of Parliament to the legitimacy of India's representative system cannot be stressed enough.

But as Parliament reflects upon its shared legacy, it must contemplate a seamier aspect of its story. The reputation of Parliament and the democracy it represents has reached a nadir in recent years.

Politicians may fume, but even they realise that at least among the politically aware Indian middle class, it is a widely shared sentiment. Others including Prime Minister Manmohan Singh have expressed concern over the repeated disruptions of Parliament and the acrimony and bitterness which marks the relationship between top political leaders.

Therefore, it is essential to consider reforms which may help restore Parliament's Constitutionally mandated role as the vanguard of Indian democracy.

First, as many luminaries like Vice-President Hamid Ansari have argued, it is time to revisit the 52nd Amendment to the Indian Constitution -- the so-called anti-defection law -- passed by the Rajiv Gandhi government in 1985.

Promoted as a panacea for the ills of the aaya-ram-gaya-ram culture, the law has only further attenuated the power of the individual legislator making Parliament a virtual hostage to party high commands.

In a country where inner party democracy is practically unknown, Parliament should protect the individual discretion of its members against the assault of high command hegemony. It is given that Parliament is a political body, and it is no one's case that legislators are to act completely independently impervious to the implications of their votes.

Nevertheless, some degree of autonomy -- especially if it attests to legislative functions --is required if Parliament has to effectively discharge its responsibilities. If a legislator acts because of less than savoury concerns, then existing laws can be strengthened and expanded to punish his acts rather than using the blunt tool of the anti-defection law.

The private member bill introduced by Congress MP Manish Tewari is entirely sensible in this light: It frees members from the tyranny of party whips except in case of no-confidence motions and money bills. The bill adroitly balances the twin interests of autonomy and stability and would likely promote a culture of independent thinking and policy expression in Parliament.

Second, it is important to restore the supervisory function of Parliament over the executive. The most drastic sanction available to Parliament against the executive is the no-confidence motion.

However, for all practical purposes, its usage is limited to unstable coalition governments; in case of the governing United Progressive Alliance, it is primarily a negotiating tool available to recalcitrant allies engaged in rent extraction.

However, Parliament can employ less draconian measures which, if properly utilised, can provide effective oversight over the executive. Apart from its various standing committees focused on financial matters, Parliament also has the Departmentally Related Standing Committees (DRSC) entrusted with the responsibility of overseeing the conduct of individual ministries.

However, many DRSC reports are not even placed in Parliament especially if they are unfavorable to the government of the day. It can be mandated that these reports must be publicly available and a discussion on all the pertinent issues be held.

The practice of holding annual elections to DRSCs can be replaced by longer terms as current rules inhibit development of policy expertise in specific areas.

Finally, similar to standing committees, the DRSCs can be granted the right to summon government officials and even ministers if required. Televising committee hearings would further serve the purpose of transparency and openness.

Ultimately, Parliament has to guard its own privileges and rights and ensure that the executive remains answerable to it.

Members of Parliament are also handicapped because of the limited resources and research tools available to them. Modern bills are extremely complex and no Parliamentarian can be reasonably expected to understand the full ramifications of every proposed legislation without specialised inputs.

Private bodies like the PRS Legislative Services are playing an important role in educating Parliamentarians. However, what Parliament truly needs is the equivalent of the US Congressional Research Service: A non-partisan research arm staffed by people with the high level of expertise and training and which is entirely independent of the executive.

The Rajya Sabha -- the Upper House of Parliament -- presents its own set of problems. It was originally designed to voice the opinion of the states which were weak in a Constitutional scheme favouring a strong Centre. However, the Rajya Sabha is now reduced to a sinecure for the elderly and those unwilling or unable to seek popular mandate.

Perhaps nothing better illustrates how far the Rajya Sabha has fallen than the case of Rishang Keishing. A member of the first Lok Sabha, Keishing was felicitated by President Pratibha Patil during the ongoing 60th anniversary celebrations. Keishing, now 92, is currently a member of the Rajya Sabha!

As infamously demonstrated in the annulled Jharkhand election, Rajya Sabha seats are often auctioned to the rich and the connected.

As Shashi Shekhar argues in a recent Rediff.com column, it may be time to consider direct elections to the Rajya Sabha so that it truly represents the interests of the states. It may even help address the disenfranchisement experienced by many less developed parts of the country who feel that New Delhi simply ignores their voice.

In any case, it is amply clear that in its current shape the Rajya Sabha serves no real purpose and urgent reforms are required for it to properly discharge its constitutional responsibilities.

Indubitably, a substantial number of Parliamentarians face serious criminal charges or are embroiled in corruption scandals. Election Commission guidelines force candidates to publicly disclose their financial assets as well as pending criminal cases. These disclosures are important and the process needs to be further strengthened with enhanced penalties for those releasing incomplete records.

Nevertheless, it would be hard to believe that voters are simply unaware of the corruption of their local leaders. And yet, members accused of heinous crimes are repeatedly re-elected either because voters lack true choice or simply because these issues matter much less to the average voter than widely believed.

In a democracy, the voters are ultimate guarantee of the sanctity and the effectiveness of Parliament. Criticise, but do not disengage is the mantra which should drive all informed voters.

Parliament is essential to the success of Indian democracy and the citizenry should be in the forefront of demanding reforms which help improve and strengthen its functioning.

If citizens do not hold Parliament accountable, who will?

Dr Rohit Pradhan is a fellow at the Takshashila Institution. The views are personal. 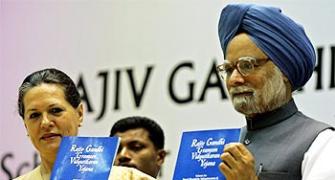 'The Congress needs the Gandhi family'

'I never saw him lose his temper'