News
Business
Movies
Sports
Cricket
Get Ahead
Money Tips
Shopping
Sign in  |  Create a Rediffmail account
Rediff.com  » News » Human life is obviously cheaper in India than in the US

Human life is obviously cheaper in India than in the US 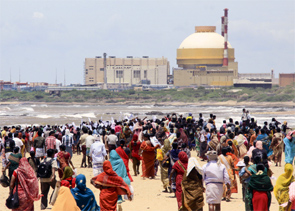 How on earth did Dr Manmohan Singh and his ministers conclude that the casualties of a disaster in a nuclear plant would be fewer than the deaths and injuries caused by the Bhopal gas tragedy? And that the compensation could, therefore, be capped at a smaller amount, asks T V R Shenoy.

On the night of December 2-3, 1984, methyl isocyanate escaped from the Union Carbide factory in Bhopal. Between 2,500 and 3,000 people were killed immediately; the ultimate toll is estimated at about 20,000 -- and that is actual deaths, not counting those injured.

In 1989, the Supreme Court ordered Union Carbide to pay $470 million in compensation.

On April 20, 2010 the oil rig Deepwater Horizon, owned by the multinational BP, exploded. Eleven died in the accident, and crude oil continued to gush forth up to July 15.

BP and the US Department of Justice agreed, in November 2012, to a fine of $4.525 billion. That does not include other criminal and civil cases, which as of the first quarter of 2013, cost BP a whopping $42.2 billion.

Human life and the environment alike are obviously cheaper in India than in the United States.

Now, please look at what is said in the Civil Liability for Nuclear Damage Act of 2010, specifically in Chapter II, Section 6 (2): 'The liability of an operator for each nuclear incident shall be:
a. in respect of nuclear reactors having thermal power equal to or above ten MW, rupees one thousand five hundred crores;
b. in respect of spent fuel reprocessing plants, rupees three hundred crores;
c. in respect of the research reactors having thermal power below ten MW, fuel cycle facilities other than spent fuel reprocessing plants and transportation of nuclear materials, rupees one hundred crores.'

The highest amount allotted under the current law, for nuclear accidents, is Rs 1,500 crore.

In 2010, when the Civil Liability for Nuclear Damage Act was crafted by the Manmohan Singh government, Rs 1,500 crore bought about $330 million.

Remember that the post-Bhopal compensation was $470 million.

How on earth did Dr Manmohan Singh and his ministers conclude that the casualties of a disaster in a nuclear plant would be fewer than the deaths and injuries caused by the Bhopal gas tragedy? And that the compensation could, therefore, be capped at a smaller amount?

The results of the accident at the Fukushima nuclear plant in Japan are still not properly calculated. But we have a better idea about the casualties caused by the mishap in the plant in Chernobyl on April 26, 1986. Thirty years after that disaster the International Journal of Cancer wrote:

What sense does it make to cap liabilities at Rs 1,500 crore should the worst occur?

But it gets worse. Dr Manmohan Singh is allegedly willing to further weaken the provisions of an already inadequate law. Will this be done on his trip to the United States? If so, is it being done under American pressure, and for the benefit of American vendors?

At this point, let me dispel a myth. There is a story going around that no new nuclear reactors are being built in the United States. This is untrue.

America's Nuclear Regulatory Commission has given the green signal to four new reactors in two plants, namely Units 3 and 4 at the Vogtle plant in Georgia, and Units 2 and 3 at the Virgil C Summer plant in South Carolina.

Work has also restarted on a fifth, previously approved plant, the Watts Bar 2 reactor run by the Tennessee Valley Authority. With target dates for completion between 2016 and 2018 these five reactors will have a combined capacity of 5,600 MW.

But -- this is a big 'but' -- there is definitely a huge question mark over the future of nuclear power in the United States. Much of this is because of the challenge from a rival fuel, namely natural gas. It is now cheaper in many cases to generate electricity by burning the so-called 'shale' gas. At the same time the coal industry too tries to find ways to clean up its act.

Part of it is also because of fears over nuclear technology in the wake of Japan's Fukushima incident. When the Nuclear Regulatory Commission gave its okay to the aforementioned Vogtle reactors it was only after a 4-1 vote -- with the NRC's chairman, Gregory Jaczko, being the dissenter. That was dramatic demonstration of the dissension within the larger scientific community itself over the safety of nuclear reactors.

The combination of cheap natural gas (and coal) and the rising cost of safety regulations in the United States have made nuclear technology an expensive proposition for American vendors. So, it is quite possible that they are on the hunt for new markets -- and India offers huge possibilities.

But at what cost? The Rs 1,500 crore at which the liability is capped under the Nuclear Damage Act of 2010 was worth, as I said, about $330 million in the year of that legislation. At today's depreciated rupee the same amount fetches about $240 million, less than a quarter of a billion.

In 2008, when the Manmohan Singh ministry pushed the nuclear deal through Parliament under questionable circumstances, gleeful Americans estimated that it would lead to $40 billion worth of deals. (Some thought that this was too conservative, and said it might cross the $100 billion mark.)

And yet the Manmohan Singh government capped liabilities at well under one billion dollars -- and may want to revise that figure even further! Why would it do so?

Officials admit off the record that American reactors will be more expensive than that offered by competitors. It is estimated that the Russian technology used at Kundankulam cost about 40 per cent of the price that could be asked by the Americans.

There is a final twist in the tale. Apparently the Americans are to be told that the site for the first new nuclear plant is Bhavnagar, in the Saurashtra region of Gujarat. Yet the Government of India has not acquired any land for this supposed project, and there has been zero consultation with the government of Gujarat.

The tale to be spun in Washington, DC is that the Manmohan Singh regime is only too ready to cut lucrative deals with American vendors, but that the chief minister of Gujarat is unwilling to play ball. And who is that recalcitrant chief minister but the Opposition's prime ministerial candidate!

Let me sum it up. Vendors of American nuclear technology are facing enormous competition from natural gas in their own country. Other nations offer reactors at cheaper prices. The Manmohan Singh ministry has capped liabilities at a wretchedly low rate, and may offer more concessions. It does not add up to a pretty picture.

On Wednesday, September 18, the US Federal Reserve said it would continue pushing $85 billion into the economy every month. That drove our Sensex up by 684.48 points on Thursday. On Friday, September 20, Raghuram Rajan, the newly-minted Governor of the Reserve Bank, took the punchbowl away from the party, raising the repo rate from 7.25 per cent to 7.50 per cent, adding that India could not afford to depend on America forever, but needed to build up its own strength.

That is sound advice -- whether in the field of finance or in that of nuclear technology. 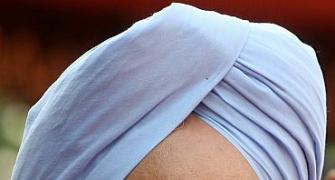 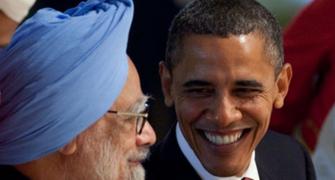 The India-US love story is soaring 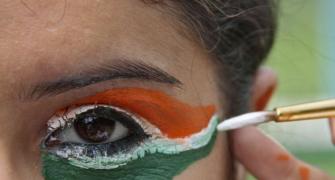 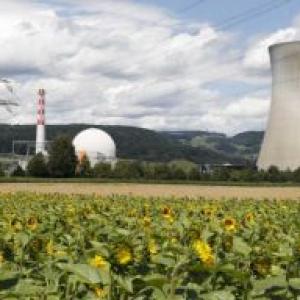