This article is dedicated to all those who died during the 1962 Sino-Indian war; to those who suffered for months in the PoW camps in Tibet; to those who were humiliated for no fault of theirs; to their families.

Let us hope that what happened in 1962 will never happened again, prays Claude Arpi 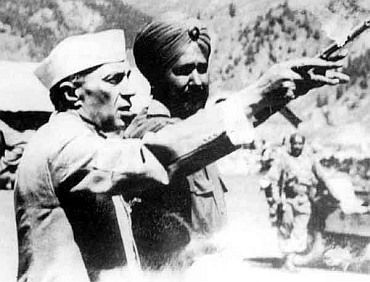 Two years ago, I wrote an article on the Henderson Brooks Report for The Indian Defence Review (External Link: “Why the Henderson-Brooks report has never been released!)

My conclusion was that one of the reasons for the famous report, written by the Anglo-Indian General Henderson Brooks, not to be released by the Government of India, was that in the early months of 1962, the Army Headquarters had some doubts about where the frontier with Tibet was.

Under political pressure, they nevertheless foolishly went ahead and established a post at Dhola near the disputed Thagla ridge. It was the perfect excuse for the People’s Liberation Army to go to war against an unprepared India.

I then quoted from The Fall of Towang [Tawang], by Major General Niranjan Prasad, the Commander of 4 Infantry Division, who thus described the setting of the operations:

“The McMahon Line from just north of Khinzemane, as drawn by Sir Henry McMahon in 1914 with a thick blue pencil on an unsurveyed map, was not an accurate projection of the Himalayan watershed line. Much of the territory in those days had not been explored and McMahon was only guessing at geography when he drew a thick blue [red] line from Khinzemane to the Bhutan-Tibet-India tri-junction to its east. In this process the position of Thagla Ridge was, to say the least, left ambiguous.

The story goes that the officer surveying the area had completed an admirable task of delineating the watershed up to this point when a pretty Monpa girl claimed his attention and the work was left uncompleted. Whatever the reason, the survey authorities, ignoring physical features on the ground, joined Point MM 7914 to the India-Bhutan-Tibet tri-junction by a straight line.

Stranger still, the Government of India had not corrected this obvious mistake even in 1962. Clearly someone in External Affairs had not done his home work. This lapse cannot be easily excused or explained away. It was largely responsible for the critical dispute which later developed and eventually led to war.”

Though the Thagla Ridge was the logical border if one followed the watershed principle as well as the ownership of customary pastures’ rights, the fact remains that the old map which was the reference for India’s position on the ‘genuine’ location of the border, showed the Thagla Ridge and the Namkha Chu, North of the 1914 McMahon Line.

As Major General Prasad said, this lapse had unfortunately not been corrected after India’s independence. The Chinese must have known the doubts of the local Indian Army commanders. In his memoirs, Prasad recalls: “From our own Signals channels I had received reports of a pirate radio operating somewhere in our area, but when we referred this to higher authorities the matter was dismissed.”

It could explain how Mao was aware of Operation Leghorn to evict the Chinese from the Thagla Ridge (north of the Dhola post) in October 1962.
This explains that the Government of India was not keen to show that the 4 Corps Commander (earlier Chief of General Staff in the army Headquarters), Lt General BM Kaul, a special appointee (and protege) of Prime Minister Nehru, was not only unsure where the frontier with Tibet was, but took the risk to set up a post in a place which could be north of the border.

The Prime Minister was too busy solving the problems of the world to look into these ‘small’ details.

But it was enough for China to have a pretext to attack India a few months later (October 20, 1962). The rest is (sad) history.

Today, we know the guilty men of 1962. It is a step forward for the nation.

Background of the Establishment of Dhola Post in NEFA

22- As the Dhola Post was the focus of the start of the Sino-Indian hostilities in NEFA, it is important that the background to the establishment of the Dhola Post is given in some detail.

23- Till the introduction of the ‘Forward Policy’’ in December 1961, the policy in NEFA in regard to activities in the vicinity of the McMahon Line was as under: 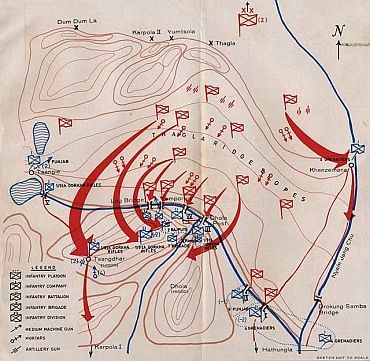 24- The Chinese in June 1961 had, it appeared, patrolled across the McMahon Line some 3 – 4 miles West of Khinzamane [also written Khenzimane] and had shown interest in the area. Thus, in March 1962, with the approaching of the patrolling seasons, Eastern Command, on the subject from XXXIII Corps, asked Army Headquarters for permission to patrol the area of the McMahon Line West of Khinzamane.

26- Originally, the intention of the establishing a post West of Khinzamane was to establish one at the Bhutan-India-Tibet Tri Junction, as given in the maps existing in May 1962. (Refer Para 15 above). These maps showed the Tri Junction at MM 7914.

27- The border in the map did not run along the watershed but was an arbitrary one running due West from Khinzamane. The watershed line and the old line are given in sketch. The watershed Tri junction is some four miles north of the one given in the maps then existing.

28- The post for various reasons was not established at the old Tri Junction, but Dhola MM 8316. Capt Mahabir Prasad of 1 Sikh selected and established the Dhola Post with a strength of one platoon of Assam Rifles on 4 June 1962.

29- In August 1962, XXXIII Corps brought to the notice of the Eastern Command the discrepancy between the arbitrary line drawn on the map and the line as it should be according to the watershed principle. (Annexure 42). This letter is important, as it gave the details of the two boundary lines. The main points are given below: (For the location of various features see Sketch H).

a- The boundary line printed on the maps had considerable inaccuracies, if the watershed principles and usage were to be applied.

c- There were three important approaches on the watershed boundary that lead into our area between Khinzamane and the recommended Tri-Juntion MM 7533. The approaches were as under:

(iv) XXXIII Corps recommended that one post should be established at Thagla and another at the Tsangle MM 7719 to cover the other two passes. Tsangle, as can be seen, according to the old boundary, was in Bhutan. (Bhutan, incidentally did raise this question in October, when a representative of their approached Corps Headquarters).

(e) The letter went on to give recommendations for establishing these posts and also asked for a survey to be carried out. Pending approval o the recommendations, it was intended to carry out patrolling between Khinzamane and the Watershed Tri-junction.
(f) The last paragraph of the letter is of some importance and is reproduced below:

“It will be seen from Sketch P attached (Sketch H of this review) that Dhola Post grid reference (MM 8513), as reported earlier, is not correct and should be MM 8316. However, to avoid alarm and queries from all concerned, it is proposed to continue using the present grid reference in the location statement situation report until such a time the case is finally decided by you. We hope its meets with your approval.”

This, in effect, meant that the post was actually NORTH of the McMahon Line as the marked on the map. The location as given out MM 8513 was just SOUTH and MM 8816 just NORTH of the Line. (Though the sketch showed this, the letter was not clear, and it was never really expressly brought out till 12 September 1962).

30- Eastern Command conveyed the contents of this letter to Army Headquarters on 31 August, 1962.

31- An incident of some interest to the above recommendations had occurred in the meantime and requires note. A Subsidiary Intelligence Bureau representative, on a reconnaissance of the area of Thagla Ridge had found a wooden plank on 23 May 1962 with Chinese characters. These were later translated at Tezpur and read “This is our river and mountain”. This was conveyed to 4 Infantry Division by XXXIII Corps, Eastern Command and Army Headquarters on 12 July 1962. (Annexure 43).

This then was another pointer that Namka Chu and the Thagla Ridge were sensitive areas.

32- On September 1962, as is well known, Dhola Post was surrounded by the Chinese, who, by the evening, were reported to be some 600 strong in the area.