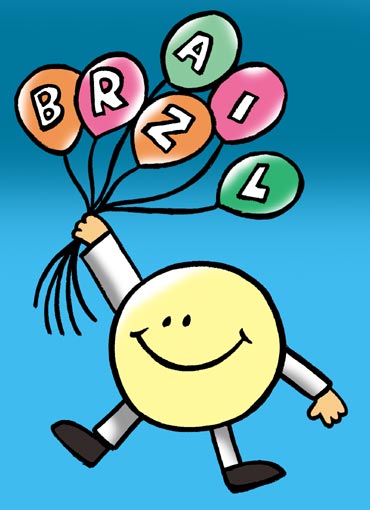 Brazilians don't read the international press and unlike us, they don't unduly worry about what others think about them. Nor are they concerned about their pecking order in the world, says B S Prakash.

When I joined the Indian Foreign Service a long time ago, a very senior worthy from the system came to talk to us. He gave us some advice to follow forever: 'Never express an opinion about your host country in the country where you are posted; of course, never say anything negative about your own country, and don't find fault with a third country.'

All of us were absorbing this wisdom when a thought struck me. Am I signing into permanent silence by joining the diplomatic service? 'Is it all right to praise a country, Sir?' I asked timidly.

He pondered for a while and came up with a gem that I still remember. 'When asked a question, a diplomat thinks twice and then says nothing,' he said to my utter confusion and kept quiet for a minute.

But then he took some pity and told me: 'There is not much harm in praising your host country, as long as you don't develop localitis.'

Localitis is the term for the dreaded disease of diplomats and journalists when they fall in love with the locale where they temporarily are, and lose all objectivity.

Alas, I have not followed much of this advice, neither the thinking twice part nor keeping silent, as my habitual Rediff readers know. However, the point about 'praise' being all right came to my mind the other day when I returned to Brazil from Delhi traveling a bit in the other continents in between.

Brazil held its national elections on October 3 and returning a few days before, I was struck by the sense of satisfaction bordering on contentment with which the voters went to the polls. The results are inconclusive as yet since under the Brazilian system (as also in much of Latin America), to win a candidate has to secure more than 50 per cent.

The leading candidate has failed narrowly to achieve this and hence a second round is expected at the end of the month. But my comments are not about the details of politics in Brazil or about the candidates: A strict 'no, no' for me as the Indian ambassador.

I am more fascinated with the state of being in a booming Brazil at this point in time. My sentiments are also perhaps shaped somewhat by traversing through other lands recently, including my own, permeated with complaints and criticism and then returning to Brazil.

A quick word then about my experience of other locales before unashamedly exhibiting some localitis.

First, Delhi, where I went on work. Living in Mayur Vihar, a part of East Delhi, not far from the Athletes Village of the Commonwealth Games, I saw all the manifestations of the CWG.

Enough has been written about them by now, but for me the sight of thousands of squatting stone cutters perpetually chipping at all the pavements in Delhi in scorching sun or pouring rain for no apparent purpose was intensely troubling.

Before the Games, I heard criticism and cynicism everywhere, even if today the tone is already turning self-congratulatory. Happy to escape Delhi, I went to my home town in Karnataka, a different continent in its priorities and preoccupations.

Here it was worse, again talk of hundreds of crores, but this time all about Bellary brothers and yet another act in a perennially bizarre drama of herding and hoarding MLAs.

Starting the long return journey, I transited through Europe and sensed a different set of lamentations: No resources to use, let alone waste; belt tightening in an already lean physique, worries about growth of every kind from demographic to economic, and a gradual acceptance of what was the classical Hindu rate of growth -- 2 to 3 per cent.

The US, my final point of transition, had other rants: Implacable hostility between the two parties paralysing Congress, uncertainty about the political landscape after the November elections, and anxieties about a looming American decline.

New York was a moving spectacle as always, it was a joy to roam the streets, but one could not escape the question: Is life getting better or tougher for the average Joe?

Returning, this question is easy to answer in Brazil. The average Ricardo or Giselle here -- equivalent of the average Joe -- is cheerful. He does not care much about Time/Newsweek or The Economist all with cover stories about President Lula, Brazil's growth potential, its emerging power status, world ranking etc etc.

First, they do not read the international press and second, I suspect that unlike us, they don't unduly worry about what others think about them. Nor are they concerned about their pecking order in the world.

But importantly they are currently in a happy zone where they know intuitively and empirically that things are going well in their lives, with their politics, and with the prospects in the coming years.

Alas, they lost the World Cup in South Africa, but their rivals Argentina lost the next day too, and hence there is some justice after all in the world! And they themselves will be hosting the World Cup.

What explains this buoyant mood in Brazil?

First though, it is important to underline that Brazil is very much a developing country like India with comparable challenges of poverty reduction, illiteracy, health care, employment generation and much else.

It has people below the poverty line, regional disparities, ethnic and racial diversity, urban crime, and in a number of other ways qualifies as a country with which comparisons are meaningful for us, especially since it is also a full throated democracy.

Of course, it is better endowed with resources, oil, mineral, and agricultural and has one fifth the population of India with more than twice our size.

The current optimism and good cheer in Brazil is a combination of good politics, sound economics and an easy going temperament.

Brazil has seen impressive economic growth, much like ours, but more important, the benefits of growth are really reaching the lowest segments of society in a tangible and noticeable way.

'Inclusive growth' that elusive ideal seems to be within grasp. Over the last eight years it has become one of the first ten economies of the world at a GDP of $1.6 trillion, foreign exchange reserves of over $280 billion, all figures comparable to India.

But what is truly remarkable is that year after year people in millions have been lifted out of poverty and at present the number of people below the poverty line at $1.25 a day is 5 per cent of the population compared to over 30 per cent a decade back.

Education, health and other human development indices show similar positive trends. Brazilians will be the first to admit that they still have formidable challenges but the point is that people believe that their lives are getting better.

Much of this has been achieved by imaginatively conceived and efficiently executed social welfare programmes. The most well known is the Bolsa Familia or the family welfare programme under what the economists term 'conditional cash transfer'.

The simplicity and the efficacy of the programme makes it a model for other developing countries. For example, to get the benefits children need to be inoculated and vaccinated, demonstrate attendance in schools and as a part of the benefits, they get multi-vitamin tablets!

No wonder, all the parties and candidates vow continuation of the programme as a part of their election promises.

The political personalities in the current presidential race reinforce the optimism about the system. President Lula, who has to lay down office as per the constitution having completed two terms, enjoys unprecedented affection among the people.

Obama called him 'The Man', the ultimate accolade for the most popular politician in the world with over 80 per cent approval rating. His protege as also the other candidates are regarded as responsible and pragmatic.

Continuity rather than the change is the mantra of everyone. The candidate from the Green party is the daughter of an impoverished rubber farmer from the Amazon, became literate only at the age of sixteen, worked as a maid and by sheer determination and hard work pulled herself up.

The empowerment of the hitherto underprivileged points to a progressive society.

Along with all the domestic achievements, Brazil today basks in international recognition, though as I said, it is not too much of an issue here. Brazil and India are members of every grouping of new emerging powers, be it BRIC or IBSA or BASIC or G-20 on which I have written in these columns before.

The FIFA World Cup in 2014 and the Olympics in 2016 will bring Brazil into the homes and hearts of all of us.

Caught up in this mood of localitis but trying to do my job, I try to tell my Brazilian friends about what we have done for the Commonwealth Games. But this proves more difficult than I expect, but not because of the CWG controversies.

'What is Commonwealth? Why a competition without other BRIC members, without China, Russia and Brazil?' they ask.

I try to explain the concept of Commonwealth and expound on the magnitude of our challenges.

"130,000 policemen!" they exclaim. "Why? Are they the biggest fans who corner all the tickets first? Will there be space for others?' they wonder.

We live in the same word and yet can be in different planets, I realise.