I am Anna Hazare?

Democracy must be nurtured, or else it gets corrupted. Voting is just one part of the duty as a citizen of this democracy. But another duty that most of us overlook is participation, says G V Dasarathi.

A couple of days ago I took a bus to Majestic and walked up to Freedom Park to add my little bit to the movement. It happened to be the evening rush hour on a working day. I've been walking with a crutch for the past week because of a temporary physical disability, and it was a long difficult walk on what passes for footpaths in Bangalore.

As is customary in Bangalore, the footpaths had been taken over by two-wheeler riders and I almost got knocked down by a couple of them. These people couldn't care less that there was a man with a crutch in front of them, and I was horrified at their insensitivity.

Many of them had pillion riders holding large flags, with 'I am Anna Hazare' stickers on their shirts. At the venue, as I was slowly walking up the steep mud road at the entrance, a few cars driving in honked impatiently behind me to make me limp along faster and stop blocking their way. The ground at the venue was strewn with the backs of 'I am Anna Hazare' stickers and leaflets describing what the movement was about.

At the venue the noise and the energy level was tremendous and impressive. Patriotic songs were being sung, every few minutes a group of people would arrive in a procession with a banner announcing their institution's name (company, college, whatever). People were waving flags all over the place. Everybody had 'I am Anna Hazare' stickers.

I thought 'What a lovely thing to have happened. Finally the whole country is charged up about corruption as an issue and have found a person they can follow.'

Then I thought of the other definition of corruption: Impairment of integrity, virtue or moral principle, violating standards of right or good conduct. You are corrupt if your internal moral compass is not working properly, if it's not telling you -- 'Hey, don't do this. There is no policeman around to see and charge you for this, but it is a crime anyway. It's not RIGHT.'

Corruption come of various forms. The taking of bribes that we are fighting against is just one. Examples of other forms are people riding their two-wheelers on the footpath I was walking on, others honking impatiently behind me as I limped along, throwing paper on the ground at Freedom Park.

All these are caused by the thinking that I, ME and MINE are paramount, and that rules can be bent or broken to ensure this. When our moral compass says 'This is not right', the vast majority of us whack it on its head and tell it to shut up. Anna Hazare follows his moral compass.

Voting is just one part of your duty as a citizen of this democracy. But another duty that most of us overlook is participation -- either by running for office or by being sure to take advantage of laws in places that allow for our voices to be heard.

If you don't like a decision made by your elected officials, let them know by asking them to publicly explain their decisions. Democracy must be nurtured, or else it gets corrupted (there we go again, the 'C' word). We do not do anything to improve our locality, city or country actively.

We think it is the government's duty to do everything for us. We don't support good decisions and good politicians, and we don't question bad decisions and bad politicians. While we sit back and become passive spectators, Anna Hazare ACTS.

So dear reader, let's all take this pledge today:

1. I realise that my country is being destroyed by my small acts of moral corruption as much as by the large acts of financial corruption that I am fighting.

2. I will follow my moral compass. I will do what is morally and ethically right, irrespective of whether someone is watching or not.

3. I will not be a passive spectator. I will participate in democracy, and help nurture it.

If we can stick to this pledge, only then will we have the right to wear an 'I am Anna Hazare' badge. 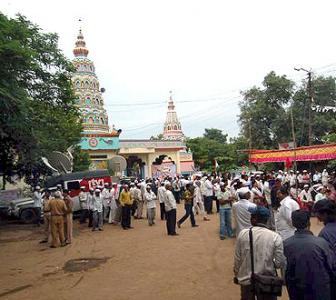 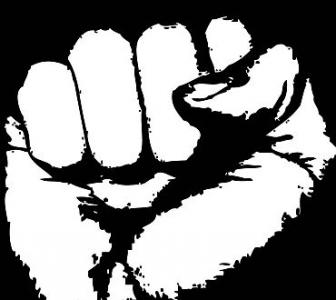 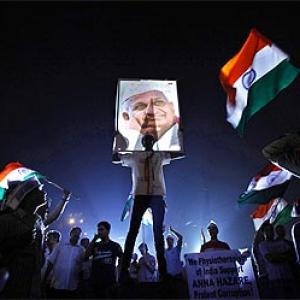 In India, you use either nepotism or corruption: Narayana Murthy

Why has PM not faced Anna Hazare between April and August?