Why omit the Tiananmen massacre from the history of China's Communist party? asks Claude Arpi. IMAGE: The most famous image from the crushing of the Tiananmen Square uprising: A Chinese citizen stands in front of tanks on the Avenue of Eternal Peace in this June 5, 1989 photograph. Photograph: Arthur Tsang/Reuters

Since the beginning of the year, China has started celebrating 100 years of the Communist party of China.

For the occasion, Xi Jinping has decided to teach the history of Modern China to everyone in China; every citizen should 'learn about a century of party history and write a new great legend for the Party.'

The 'credit points' refer to the way the totalitarian regime is keeping a tab on its citizens, by crediting (or debiting) each and every Chinese for his/her actions; even the most seemingly insignificant deed is recorded into the Communist party's mega computers' memory.

Xinhua added: '...The new journey of a modern socialist country has started well.' IMAGE: Chinese police monitor a march by tens of thousands of pro-democracy protesters in the special economic zone of Shenzhen in southern China on May 22, 1989. Photograph: Andrew Wong/Reuters

On March 1, 2021, Xi addressed the young cadres at the Central Party School in Beijing; he told them that they were the successors of the old comrades. 'The glory of the party is in your hands,' Xi said, and exhorted them to be the 'faithful successor of the tradition and fine work-style of the Communist party, constantly enhancing willpower, perseverance and self-control and making contributions in the new journey of comprehensively building a modern socialist country in the New Era!'

And, of course, 'loyalty to the party is the primary political quality of Communists,' Xi ; he added.

But there is another side to it; there are black (or 'bloodied' red) holes in the official history.

If Beijing has forgotten, the world has not. In 1997, French scholar Stephane Courtois, along with other European academics, published Le Livre noir du communisme, which was later translated in several languages under the title The Black Book of Communism: Crimes, Terror, Repression.

The Black Book sold tens of millions of copies; it is still considered by many as one of the most influential publications written about the history of Communism in the 20th century.

The authors documented the history of political repression by Communist States, including genocides, extrajudicial executions, deportations, killing populations in labour camps as well as artificially-created famines. IMAGE: Chinese students carry a sign that reads, 'Give me democracy or give me death', during a demonstration in Tiananmen Square, May 14, 1989 Photograph: Reuters

In the first chapter, The Crimes of Communism, Stephane Courtois, quoting Plato's Republic and Thomas More as Communist examples of 'utopian philosophy', explains, 'We must make a distinction between the doctrine of Communism and its practice. As a political philosophy, communism has existed for centuries, even millennia.'

In China alone, there is no doubt today that the Great Leap Forward resulted in 40 million to 50 million deaths.

According to Frank Dikotter in his masterly Mao's Great Famine: The History of China's Most Devastating Catastrophe, 45 million people died unnecessarily.

Yang Jisheng in Tombstone: The Great Chinese Famine, 1958-1962 put the tally between 43 million and 46 million. 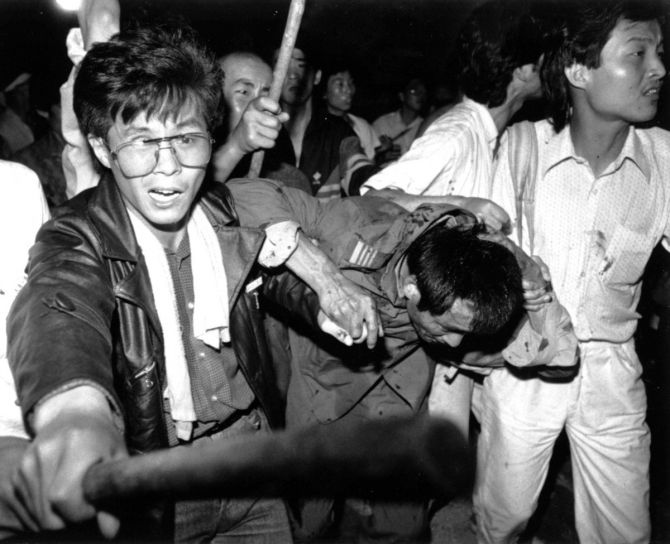 IMAGE: A captured tank driver is helped to safety by students after crowds beat him. June 4, 1989. Photograph: Reuters

In the past, Hong Kong used to commemorate the Tiananmen Square events. Today, the former British colony has been banned doing so.

A historical event is worth recalling.

Dr Zhisui Li, Mao Zedong's private physician, recorded the death of Zhou Enlai, the Chinese premier, and Mao's reactions to it in 1976. Dr Li wrote: 'Beginning in mid-March, knowing that the Qing Ming festival for honouring the dead would be celebrated on April 4, the citizens of Beijing began going to the Monument to the Revolutionary Heroes in Tiananmen Square to place mourning wreaths for Zhou.

'The movement was spontaneous, and the crowds grew larger by the day. The country had not witnessed such an outpouring of popular sentiment since before the Communists came to power in 1949.'

As April 4 approached, Dr Li visited Tiananmen clandestinely: 'The Square was filled with tens of thousands of people singing, making speeches, and reading poems. The mourning wreaths stretched from the Monument to the Revolutionary Heroes in the centre of the square all the way to Changan Avenue just in front of the Gate of Heavenly Peace. ...It was impressive and moving.' Though Hu Yaobang had been sacked as secretary of the Chinese Communist party in January 1987, he was still a member of the politburo and entitled to attend important meetings.

On April 9, 1989, after uttering some strong words on the Communist party's failures, the respected Hu Yaobang had a stroke.

A week later he passed away (similarly, the Panchen Lama had a 'stroke' when he mentioned the misdeeds of the party in January 1989 in Shigatse, Tibet).

Hu Yaobang's death was the beginning of the largest spontaneous student revolution since 1919.

During the following days and weeks, the students demanded freedom of speech and the press, democratic elections, greater transparency in government dealings. 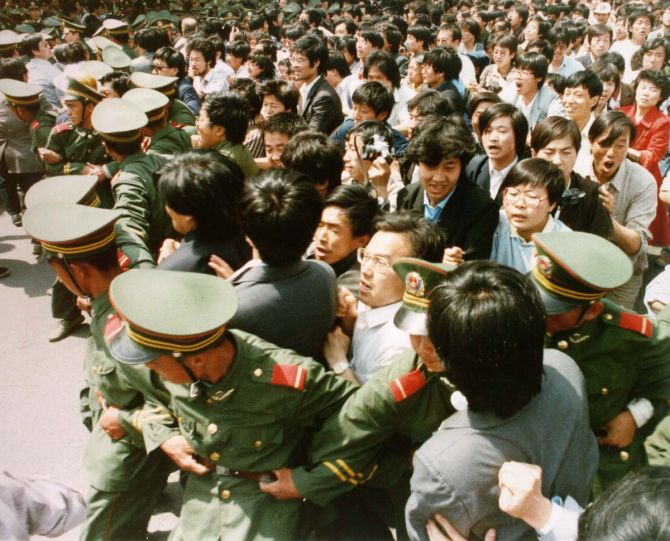 IMAGE: Crowds of jubilant students surge through a police cordon before pouring into Tiananmen Square on June 4, 1989. Photograph: Reuters

The students believed that Hu Yaobang had been sacked though he had followed 'correct' policies.

They demanded that the government 'should affirm as correct Hu Yaobang's views on democracy and freedom.'

When The People's Daily termed the first spontaneous demonstrations as 'turmoil', the events took a new turn.

For the students, the word 'turmoil' ('dongluan') had a strong meaning in Chinese reminiscent of the black days of the Cultural Revolution. Zhao Ziyang was then the Communist party's general secretary; having the same conviction as Hu Yaobang, he thought that a possibility of political reform existed in Communist China.

During the following weeks, he constantly tried to negotiate a compromise with the students. This could have changed the Middle Kingdom's fate.

We know what followed: During the night of June 3, then premier Li Peng ordered the tanks to roll out on the Square. Several thousand students lost their lives that night.

The party was saved and the fate of China was sealed (at least for the next few decades). One of the many ironies was that Li Peng was Zhou Enlai's adopted son. IMAGE: A group of journalists support the pro-Democracy protest in Tiananmen Square, May 17, 1989. Photograph: Carl Ho/Reuters In the meantime, the history of Modern Tibet is also rewritten; forgotten are the hundreds of thousands dead or the complete destruction of innumerable monasteries; on May 23, the Communist party celebrated the 70th anniversary of the 'Liberation of Tibet', when the Dalai Lama's representatives were forced under duress to sign that Tibet had 'returned' to the Motherland (China).

On the occasion, the local press in Lhasa reported: 'Early in the morning, in the Potala Palace Square, the golden characters of the Tibet Peaceful Liberation Monument shined brightly. As evidenced by the monument, the peaceful liberation of Tibet 70 years ago not only shattered the delusional attempts of external forces to separate Tibet from China, safeguarding national sovereignty and territorial integrity, safeguarded the unity of the motherland and ethnic unity, and opened up the liberation of millions of serfs.'

The Communist newspaper added: 'This is a new day, and the sun shines all over the snowy plateau.'

The Xinhua article quoted earlier concluded: 'Looking back on the party's history ...our party has always adhered to the original aspiration and mission of seeking happiness for the Chinese people and rejuvenation for the Chinese nation, and it has never hesitated to advance toward this goal, thus winning the sincere and firm support of the people.'

If it was true, why omit the Great Leap Forward, the Cultural Revolution or the Tiananmen Massacre from the history of China'a Communist party? It should at least have been analysed to understand what went wrong. Hiding a large portion of history does not give credibility to the Party.

It is time the world starts pressurising Beijing to tell the truth. 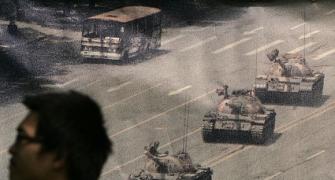 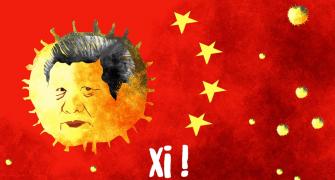 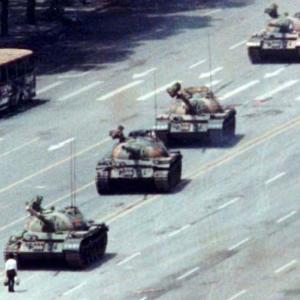