India-China relations can't be normal till Tibet issue is resolved

'Tibet remains a prickly issue between the giant Asian nations. China still claims more than 80,000 sq kilometres of Indian territory in the Northeast. Why?'

'Just because Beijing refuses to acknowledge the McMahon line which separates India and Tibet, and this, simply because the 1914 Agreement delineating the border was signed by the then government of independent Tibet with India's then foreign secretary (Sir Henry McMahon),' says Claude Arpi. 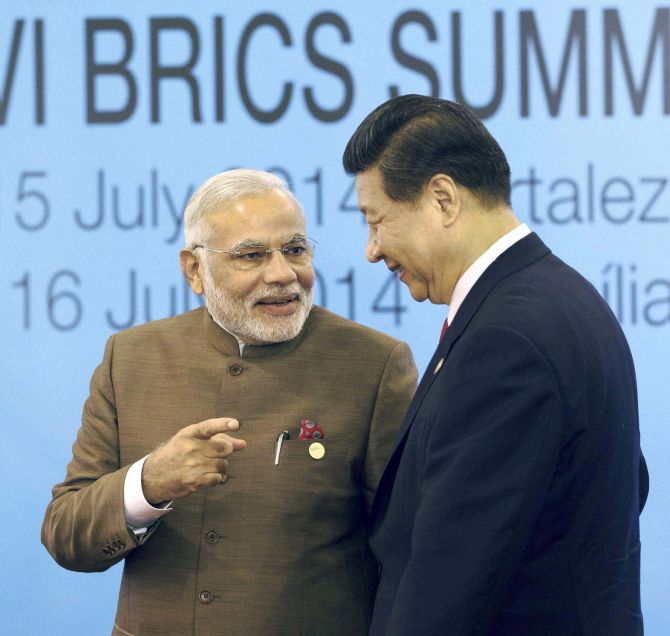 President Xi Jinping of China will be in New Delhi next week; both India and China take the visit seriously. The Modi Sarkar did its homework by sending National Security Adviser Ajit Doval to Beijing.

For the occasion, Doval was designated 'Special Envoy of Prime Minister Narendra Modi'; this allowed the NSA to briefly meet the Chinese president.

The Chinese news agency affirmed that Xi told Doval that the latter's visit showed the importance that Modi and the Indian government attached to the Chinese president's trip which could send a positive signal to the world: 'Our cooperation not only helps each other's development, but also benefits Asia and the world at large,' Xi said.

However, there is a (geographically and strategically) larger issue which remains unsolved between China and India: that is Tibet and the Dalai Lama. This seems logical as Tibet represents nearly 25 per cent of the land mass of the People's Republic of China and for centuries, the Roof of the World has been a physical and political buffer between India and China.

It changed when Tibet was invaded ('liberated,' according to Mao Zedong) in the Fall of 1950. India lost a good peaceful neighbour and thereafter has had to deal with an aggressive and 'expansionist' one, Communist China.

Over the years, Marxist dogmatism has slowly disappeared from the Middle Kingdom, though Beijing continues to be allergic to what it terms 'Western values', such as democracy or rule of law.

But even in the new situation, Tibet remains a tangible prickly issue between the giant Asian nations.

It is visible when one looks at a map of the Himalayas: China still claims more than 80,000 sq kilometres of Indian territory in the Northeast. Why this claim? Just because Beijing refuses to acknowledge the McMahon line which separates India and Tibet, and this, simply because the 1914 Agreement delineating the border was signed by the then government of independent Tibet with India's then foreign secretary (Sir Henry McMahon).

Beijing is not ready to recognise the basic historical fact that Tibet was independent before its so-called liberation.

As President Xi prepares to leave China for India, Beijing too has done its homework; it invited a group of SAARC journalists to Tibet in order to convince them of China's point of view.

One Indian scribe wrote: 'When asked about the Dalai Lama and prospects of talks with Tibetans living in India, Chinese officials normally follow a hard line by portraying the 14th spiritual leader of the Tibetan Buddhists as being a "splittist", and his supporters across the world as being secessionists, even "terrorists".'

Obviously, the Chinese officials know how to calibrate their language; the Indian journalist is poorly informed when she said: 'This is why the response of Wu Yingjie, the second most important person in the Chinese Communist Party in the Tibetan Autonomous Region, came as a bolt from the blue.'

First, Wu, one of the four deputy secretaries of the local Communist Party and an old Tibet hand who spent his entire career in Tibet (by the way, Wu is only no 4 in the pecking order of the CPC's regional hierarchy) just repeated the old Chinese position: 'Talks with the Dalai Lama are ongoing and smooth. What we are discussing, however, is not Tibet's future, but his own.'

As early as 1981, the Dalai Lama had rejected the proposal as his struggle was for 6 million Tibetans, not for himself personally or for his own future.

Gyalo Thondup, the Dalai Lama's elder brother, visited Beijing in 1981; on July 28, he had a meeting with then CCP general secretary Hu Yaobang, during which the Chinese parameters of the future negotiations were given. It was China's answer to a letter that the Tibetan leader had sent to Chinese paramount leader Deng Xiaoping.

From the Chinese side, this policy statement would guide all further talks; it only mentioned the status of the Dalai Lama and his future role in case he returned to the 'motherland.' Here are some points mentioned in the Communique from Beijing:

1. The Dalai Lama should be confident that China has entered a new stage of long term political stability, steady economic growth and mutual help among all nationalities.

2. The Dalai Lama and his representatives should be frank and sincere with the Central Government, not beat around the bush.

3. The central authorities sincerely welcome the Dalai Lama and his followers to come back to live.

4. The Dalai Lama will enjoy the same political status and living conditions as he had before 1959. It is suggested that he not go to live in Tibet or hold local posts there. Of course, he may go back to Tibet from time to time.

This was not acceptable to the Dalai Lama and his exiled administration. The Tibetan leader wanted to talk about the happiness and the fate of all his countrymen, not about his own visit to Tibet.

The same positions, from Beijing's and the Dalai Lama's side, have time and again been reiterated since then. 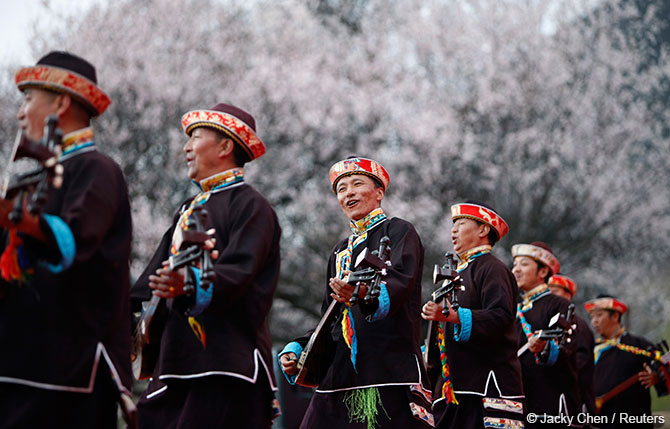 Thirty-three years later, Beijing has not changed its stance nor has the Tibetan leader. It is the reason why the 'negotiations that never were' (as per the title of my book on the subject) failed.

Incidentally last year, the same Wu Yingjie, who spent several months fire-fighting in Nagchu prefecture, had declared: 'All Tibetans, including the Dalai Lama and the people around him, can return if they accept Tibet and Taiwan as part of China, and give up "splittist" efforts.' He was then speaking to a different audience.

Wu was in Nagchu for a mass-line campaign, a scheme so dear to Xi Jinping. 'Mass-line' means that senior cadres should spend months with the 'masses' and convince them of the greatness of the Communist Party and its deep love for the masses.

In Nagchu, the campaign does not seem to have convinced the Tibetans.

Radio Free Asia, quoting a local source, recently reported: 'Chinese police have doubled the number of checkpoints on a road leading to Tibet's restive Driru county -- where residents have resisted forced displays of loyalty to Beijing for about a year -- and are beating travelers who show annoyance at being stopped and searched.'

One of the measures put in place after Wu's stay in Driru was an increase in the number of checkpoints (to 8) on the 270-km between Driru town and Nagchu, the headquarters of the prefecture.

RFA's source said this has slowed travel time and added to other hardships endured by the local people: 'In the past, this distance could be covered in about four hours. Now it takes about seven hours to cover the same distance.'

So much for the mass-line!

The South Asian journalists have obviously not been told of these 'details' as well as the Orwellian 'nets in the sky and traps on the ground' put in place by Deng Xiaogang, another TAR deputy secretary.

Even more tragic, a few weeks ago, the Chinese police is said to have opened fire to disperse hundreds of Tibetans protesting the detention of a respected village leader in Sichuan province, seriously wounding nearly a dozen people.

The New York Times reported: 'Five Tibetans have died in police custody in southwestern China after a protest last week during which residents were shot and wounded, according to the exiled Tibetan government and other groups abroad. The accounts described a flaring of tensions in a mountainous area of SichuanProvince that has long been in turmoil over the Chinese government's rule.'

The fact remains that if the Tibet issue is not solved to the satisfaction of all, it is doubtful if Sino-Indian relations can be normal one day as the Dalai Lama will remain a 'honoured guest' of India for years to come.

One solution could be that a senior trusted member of Xi's entourage meet the Dalai Lama for open-hearted talks.

It could be Wang Huning, a member of the Politburo and Xi's confidant.

Narendra Modi could perhaps suggest this softer approach to Xi.