The Indian Ocean is where great power politics will be at its most pristine in the coming years, says Harsh V Pant.

The Pakistani government last week gave its nod to a proposal for a company owned by the Chinese government, China Overseas Port Holdings Limited, to purchase control of the Gwadar port from Singapore's PSA International, which had won the contract in 2007 to operate the port for 40 years.

With this, the operational control of the strategic deep-water Gwadar port will go to China. New Delhi's reaction was as confused as ever with the Indian defence minister describing it as a matter of 'serious concern' for India, but the external affairs minister suggesting that India should not 'overreact to everything that Pakistan does or everything that China is involved in.'

China has always been keen on gaining a strategic toehold in the Arabian Sea and Gwadar has been an attractive option. Despite its problems, the Sino-Pak military collaboration too has been proceeding apace.

Despite some suggesting that China's role in Gwadar would remain limited because of mounting troubles in Baluchistan and its keenness to avoid raising hackles in New Delhi and Washington, China has now taken the plunge into the murky waters of Gwadar.

The Gwadar port, opened in 2007 with $200 million in funding from China, has been a commercial failure so far because of Pakistan's inability to use it effectively.

But where Beijing has repeatedly played down the significance of the Chinese role in Gwadar, many in the Pakistani establishment have gone to the extent of explicitly asking China to build a base at Gwadar.

China wants to overcome its 'Malacca Dilemma' as more than 80 percent of its oil imports travels through the Straits of Hormuz. Given its reluctance to rely on US naval power for unhindered access to energy, it has moved to build up its naval power at choke points along the sea routes from the Persian Gulf to the South China Sea. The Gwadar port is central to this aim.

Situated about 400 kilometres away from the Straits of Hormuz at the apex of the Arabian Sea, it can be a key asset for China. No doubt, the Gwadar port will need significant infrastructure investment before it can be viable, but this is not an insurmountable problem.

There are plans to build a 900-kilometre road for overland transport from Gwadar to China as well as rail and road links to Afghanistan and Central Asia.

The Indian Ocean is going to be the theatre where great power politics will be at its most pristine in the coming years. China's new naval strategy of 'far sea defence' is aimed at giving Beijing the ability to project its power in key oceanic areas, including and most significantly the Indian Ocean.

China has fired the first salvo. Others will have to react seriously if they want to retain their role in the region.

India's interest in Iran's Chah Bahar port is often viewed as a response to China's presence in Gwadar. But where China's ability to execute its projects in foreign lands in a time-bound and financially viable manner is becoming impressive by the day, India's lacklustre approach to infrastructure development remains a major problem.

The notion that China aspires to naval domination of the Indian Ocean remains a bit far-fetched. China would certainly like to play a greater role in the region, protect and advance its interests, especially Chinese commercial interests, as well as counter India. But given the immense geographical advantages that India enjoys in the Indian Ocean, China will have great difficulty in rivalling India in the Indian Ocean.

Even the task of SLOC protection remains a challenging one for the PLA Navy as of now. It will be a long while before China can convert these facilities into military ports. But those who argue that China will not be able to develop the port into a military base are missing the point.

If China is able to develop Gwadar and other such facilities in the Indian Ocean around India's periphery into viable strategic outposts, India's options will be constrained very significantly.

And given close defence ties between China and Pakistan, New Delhi would be fooling itself if it believes that Beijing needs an actual military base in Gwadar to project power vis-a-vis India.

It is possible to explain the construction of ports and facilities by China in the Indian Ocean, including Gwadar, on purely economic and commercial grounds, but regional and global powers like the US, Japan and India inevitably view the sum total of China's diplomatic and military efforts in the Indian Ocean as projecting power vis-a-vis competing rivals.

Moreover, most of Chinese naval facilities in the Indian Ocean are dual use in nature and no serious strategy can discount their future military use.

There may be no pearls in China's string as of yet, but New Delhi would do well to remember that even a pearl-less string is capable of doing great damage. 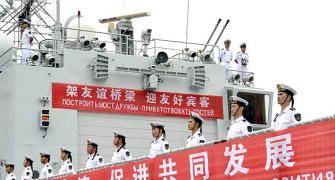