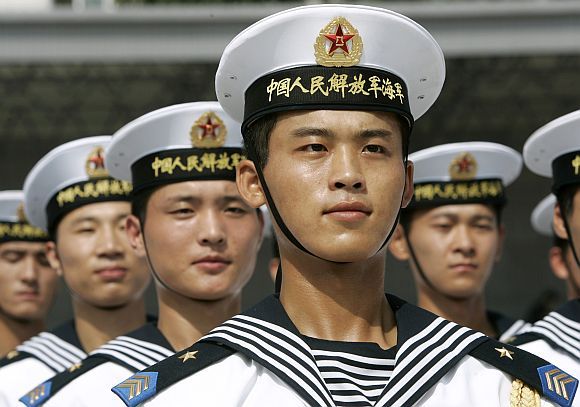 Right from conducting nuclear deterrence patrols in 2015 to its destructive space programme, from its back-tracking on economic commitments to its hardened positions on Sino-India border deal -- its approach with India spells Adversarial with a capital A, says Shehzad Poonawalla

There is a famous Chinese proverb which goes as follows: "A thousand cups of wine do not suffice when true friends meet, but half a sentence is too much when there is no meeting of minds."

When Prime Minister Narendra Modi embarks upon his maiden visit to China on May 14, a country that he has visited on three earlier occasions as chief minister of Gujarat, the million 'yuan' question would be just this: What will destiny have in store, for the two most populous nations in the world, which account for more than one third of humanity? A thousand cups of wine or an awkward half-a-sentence? Will there be a common vision of mutual co-operation or an eyeball to eyeball confrontation in the decades that follow?

As far as conventional wisdom is concerned, India and China are strategic rivals, engaged in what is perceived as a zero-sum game, competing to occupy a dominant position in Asia and the world order, through geo-political maneuvering and expansion of their political and economic footprint.

Several unresolved issues between remain between these two neighbours, amongst which the border issue, over which India and China have even gone to war in 1962, is the most difficult to resolve. In a nutshell, the Sino-Indian border dispute is one that involves sovereignty over two large and some smaller pieces of territory, that are claimed by India and China. On the westernmost side is Aksai Chin, which India claims as part of Jammu Kashmir and Ladakh but is under Chinese control. On the easternmost side, south of the McMohan Line which the Chinese reject, is the other disputed territory Arunachal Pradesh, which is under India but is claimed by China as 'South Tibet'! As a matter of fact, when PM Modi logged onto the Chinese social networking website Weibo, days before his visit and posted his first message for Chinese netizens, several users  greeted him with a message that 'South Tibet belonged to China'.

An article ‘The Six Wars China will fight in the next 50 years’ published sometime back by, what is considered to be a pro-Beijing Chinese daily, Wen Wei Po, should make us extremely circumspect about Chinese intentions. The third war, between 2035-2040, would be fought by China for the 'reconquest on South Tibet', as per the newspaper article. The article describes an entire strategy by China to disintegrate India and reduce its power. It adds how China must export advanced weapons to Pakistan to conquer Kashmir by 2035 and while India and Pakistan are busy fighting each other, it could conquer Arunachal Pradesh.
While it would be foolhardy to predicate our entire foreign policy with China on the basis on one article, let us see some other evidence that suggests China is moving away from the co-operation zone to that of confrontation.

China has substantially increased its defence spending which is now three times that of India at $136.3 billion (about Rs 8.5 lakh crore)! It is exporting sophisticated arms to Pakistan making it the top importer and is also planning to sell submarines to them. China has already supplied nuclear technology to Pakistan in defiance of the Nuclear Suppliers Group guidelines and has been pretty brazen about it.
In addition, it is investing $46 billion (about Rs 2.9 lakh crore) to create a China-Pakistan economic corridor. Just for a relative perspective, the US has since 2002 pumped $31 billion (about Rs 1.95 lakh crore) into Pakistan. The seamless CPEC corridor, will reduce the route for Chinese energy imports from the Middle East, would create infrastructure and provide electricity to Pakistan and give it strategic presence in Pakistan Occupied Kashmir.

Add to this, the recent intel inputs that China's People's Liberation Army is not only training Pakistani troops but helping them build state-of-the-art bunkers close to the border and adding to their technical expertise. While India can have no say beyond a point in what two sovereign nations -- China and Pakistan do -- this must be enough for us to wake up and smell the coffee!
The CPEC is only a part of China's larger game-plan to shore up its economic muscle by connecting China with its markets in Asia, Europe and beyond under the policy of 'One Belt, One Road’. It includes the creation of the New Silk Route that runs through Central Asia and the Maritime Silk Route that passes through the South China Sea and Indian Ocean.

Not only does it add to economic competition by gobbling up energy assets that India is eyeing but by rebranding its 'string of pearls' strategy as the 'Maritime Silk Route', China is attempting to gain strategic supremacy whilst diminishing Indian dominance.
Coming back to the tricky border dispute between India and China, there is evidence to suggest that over the years the Chinese have shifted their positions. Deng Xiaoping had advanced a proposal where India could concede Aksai Chin to China and China would recognise the status quo on the easternmost side (Arunachal Pradesh).

But thereafter, the Chinese, gaining in economic strength and military might, have no longer stuck to this package. Will a Sino-India border deal ever be possible and if so on what terms given the adversarial relationship? Gone are the days when Deng Xiaoping told Rajiv Gandhi that 'An Asian century was only possible when India and China come together.'

Today, we live in the age of Xi Jinping who talks about the 'Chinese dream'. With an economy that is five times the size of India's and a burgeoning trade deficit in favour of the Chinese, that has reached an all time high of $37.85 billion (about Rs 2.38 crore), they will still have a three times larger economy than ours in 2030, even if India clocks 9 per cent GDP growth and they make a modest 6 per cent.
It would be foolhardy then for Modi to wait for the 'thousand cups of wine' from China. Yes, the Chinese courted him heavily and strategically even while he was CM of Gujarat and a virtual untouchable in Europe and America thanks to his alleged role in the 2002 riots. Yes, Modi may feel a certain affinity with the Chinese leadership given the similarities in their world view on centralizing power, censoring, over-emphasising on manufacturing, etc but the Chinese are not dealing with us on the basis of some misplaced hope of co-operation.

The same Chinese second-rung that gave Modi grand platforms and welcomed him as CM, today occupy the seat of power in that country and even while Xi Jinping shared a swing with Modi in September 2014, we saw Chinese troops making incursions into India. Sadly, the Indian government on record does not even acknowledge these as incursions. Such a weak approach can be detrimental. The Chinese had pledged investments of $20 billion (about Rs 1.26 lakh crore) over five years, co-operation in setting up industrial parks, smart cities, etc but nothing has taken off yet. Chinese investments into India are not yet visible. These are not indicators of friendship by any stretch of imagination. These are signs of half-a-sentence.
Most of Modi's trips to foreign lands are about his showmanship. His trip to China runs the risk of becoming yet another spectacle unless it is informed by a realistic view on how the Chinese view their relationship with India. Right from conducting nuclear deterrence patrols in 2015 to its destructive space programme, from its back-tracking on economic commitments to its hardened positions on Sino-India border deal -- its approach with India spells Adversarial with a capital A.

Modi would be well advised to sit across the table and clarify our intent on the geo-political and strategic front, undertake necessary economic reforms at home to unleash our true growth potential and increase the pace of development and construction of strategic roads and assets along the Indo-China border whilst increasing our presence in the South China Sea and our influence in regions that house potential energy assets that we need.

So far Modi has not made any outreach to the Middle East and African nations and given his anti-Muslim, pro-Israel image one wonders if it would be a handicap in securing energy assets in those countries. Anyhow, the time for photo-ops is over. It is time for India's foreign policy to show some of that 56 inch muscularity.