'If the Bangladesh-China relationship strengthens further, it can only be to India's detriment,' notes Vice Admiral Premvir Das. 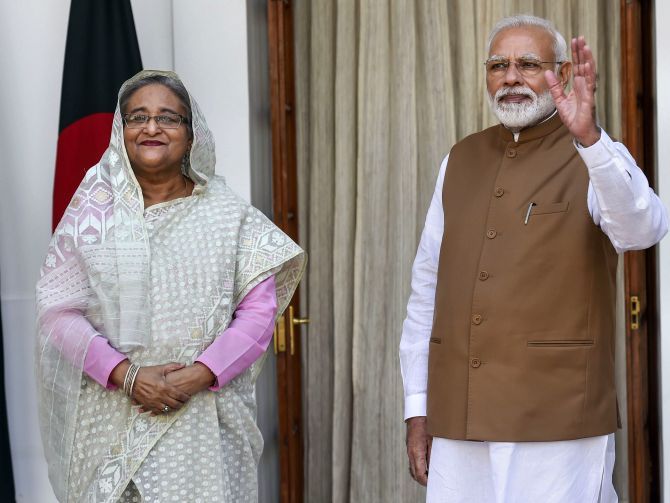 India and Bangladesh have come a long way since 1971.

From the heyday of Sheikh Mujibur Rehman, to the low points during the regimes of Zia-ur Rehman and his wife Begum Zia, to the current blossoming relationship with Mujib's daughter, Sheikh Hasina, the relationship has travelled some distance, with many ups and downs.

With an upswing now in motion, every effort must be made to ensure that the surge is maintained.

India's Indo-Pacific aspirations have been emphasised more than once by External Affairs Minister S Jaishankar in recent months; Bangladesh, located where it is, must surely figure very high in that calculus.

It is in this context that we should view recent developments resulting in, and flowing from, the cancellation of two visits by its senior ministers to our country.

While the history of our land border issues over several decades is well-known and now happily resolved, that of the maritime demarcation is unknown to most Indians.

For several years, both countries argued over a small piece of territory called New Moore Island, which submerged at high tide but was quite visible when the waters subsided.

Bangladesh claimed the island as its own and drew its maritime boundary and exclusive economic zone from it, while India maintained that it lay in its jurisdiction.

Behind both claims was an assessment that reserves of oil and gas lay submerged in the seabed around New Moore.

At one time, India even positioned its naval personnel and a ship around the island.

There was considerable acrimony and a near state of hostility between the two countries, and it was only in 2014 that the issue was resolved through international arbitration, which resulted in India giving up its claim to New Moore and about 80 per cent of the waters it had claimed.

Thus, a major impediment to good-neighbourly relations was removed.

So, now both land and maritime boundaries between the two countries stand resolved.

Why is Bangladesh important to our interests in the Indo-Pacific?

Lying some 600 miles north of the Andaman Islands in the Bay of Bengal, with the major port of Chittagong and another, Cox's Bazaar, almost bordering its neighbour Myanmar, the country is an important littoral on our eastern seaboard.

Along with Myanmar, it has had security linkages with China in the form of port infrastructure development; to this must be added the supply of military and naval hardware, in which two submarines figure prominently.

If the relationship strengthens further, it can only be to India's detriment.

Bangladesh is also a supporter of the China's Belt and Road Initiative, and that country's aspiration to link its Yunan province to the Indian Ocean, bypassing the long and arduous Malacca Straits, requires access to Chittagong through Bangladesh.

If this materialises, we will see a sizeable increase in the Chinese naval and maritime presence in the Bay of Bengal and consequently, in proximity to the Andaman Islands.

During the current positive engagement between India and Bangladesh, the potential negatives have been pushed to the back burner, but nothing should be done that may reverse the situation.

Earlier this month, the naval chief disclosed that a Chinese research vessel had intruded into our exclusive economic zone and had to be asked to leave.

This is not the first time that such an intrusion has occurred.

These ships test seabed possibilities and sonar conditions that facilitate optimum operations of submarines, and are clearly unacceptable.

Further, deployments by foreign warships in the maritime territories of others -- except on 'innocent passage' -- require prior approval.

The Chinese have ignored this requirement repeatedly.

They have flouted international norms and rules in the South China Sea, where smaller countries such as the Philippines and Vietnam have been wary of opposing them forcefully.

They cannot be allowed to replicate their in our areas of interest.

The Bay of Bengal is a key component of the Indo-Pacific, and rates high in our strategic and security priorities.

Leaving aside such unauthorised incursions, the Chinese maritime presence in the waters of the Indian Ocean has increased substantially post-2008, following the outbreak of Somali piracy.

They maintain bases in Pakistan (Gwadar) and in Djibouti in the Horn of Africa, and can deploy forces from both.

They also maintain a regular presence of four or five ships, including an oiler, in the Indian Ocean region, which provides endurance and staying power at sea.

Additionally, they are seeking a presence in island territories such as the Seychelles, and have contributed towards port development in Sri Lanka (Hambantota and Colombo) and in Myanmar.

So, friendly relations with Bangladesh are critical to India's interests.

Fortunately, from every economic and social parameter, the country is doing well and in many of them, out-performing India. The areas of discord are few.

It is in this context that we must view recent developments.

Identifying Bangladesh, even indirectly, for persecution of Hindu minorities alongside Pakistan has not been well-received by them, and it is not surprising that it has taken the position that it has.

Fortunately, Sheikh Hasina herself has not made any comments, and this speaks volumes for her own assessment of the relationship, even as the desired 'messages' were sent through cancellation of the high-profile ministerial visits.

Hopefully, these have been assimilated and will help tone down the rhetoric because, of the dozens of countries that are Indo-Pacific littorals and of importance to India, Bangladesh must rank among those at the top.

In the immediate neighbourhood, it is clearly one that merits a 'friendly' tag. It will not help our interests if that categorisation is even diluted, much less revised.

Vice Admiral Premvir Das is a former commander-in-chief of the Eastern Naval Command. He has also served as member of the National Security Advisory Board.