'How can a State, which claims to be a responsible power, unilaterally grab a "disputed" area to build a road on it?' asks Claude Arpi. After completing my first book on Tibet in the 1990s, I looked for a title which could resume the content of my research.

At the end of the 19th century, Tibet was a mere pawn in the Great Game between Imperial Powers.

The 1890 Treaty on Sikkim, today quoted ad nauseam by the Chinese government, was one of the 'unequal treaties' imposed on a smaller nation.

Big insects had little consideration for the weak.

The 13th Dalai Lama could grasp the forces at play and was determined to make Tibet an independent State. It did not work.

Charles Bell, the British frontier officer, recalled the Lama when China invaded the Land of Snows in 1910.

After deciding to temporarily take refuge in India, the Tibetan leader cabled the British Agent in Gyantse, Tibet, asking him to inform London that 'Large insects are eating and secretly injuring small insects.'

The story seems to continue today with China building a road on Bhutanese territory without informing Thimphu.

But this time, what Beijing had not expected is that India would come to the rescue and defend the small kingdom.

China, which dreams of becoming a 'big insect' (without the name!) tried to change the status quo in the Doklam area of the Bhutan-Tibet border.

On June 29, the royal government of Bhutan, which had held 24 rounds of talks on the issue with China so far, explained the situation: 'On 16th June 2017, the Chinese Army started constructing a motorable road from Dokola in the Doklam area towards the Bhutan Army camp at Zompelri.'

'Boundary talks are ongoing between Bhutan and China and we have written agreements of 1988 and 1998 stating that the two sides agree to maintain peace and tranquility in their border areas pending a final settlement on the boundary question.'

'The agreements also state that the two sides will refrain from taking unilateral action, or use of force, to change the status quo of the boundary.'

Bhutan conveyed to Beijing 'both on the ground and through the diplomatic channel,' that the construction of the road inside Bhutanese territory was a direct violation of the agreements and that it would affect the ongoing process of demarcating the China-Bhutan boundary.

Beijing and Thimbu have already had a Joint Survey of the area.

Beijing was well aware that the area has been under dispute for several decades; some 50 years ago, letters were exchanged between Delhi and Beijing using the same language for a similar incident.

Despite the fact that China has no proof to contradict that the pastures in the Dokham area have for centuries been used by Bhutanese nomads (the Chinese were nowhere to be seen before the first years of the 1960s), the Chinese spokesperson has stridently been speaking of 'Chinese' nomads using these pastures since immemorial times.

Let us come back to the 1966-1967 correspondence which appeared in Volumes 13 and 14 of the MEA's White Papers on China.

In January 1966, China was the first to open hostilities, Beijing complained of Indian troops entering Tibet on September 30, 1965 'four Indian soldiers crossed Toka La (Doka-la) and intruded into Tunglang pasture in Dongnan (Dokham plateau) grassland, and with their weapons intimidated Chinese herdsmen who were grazing cattle there.'

On September 30, 1966, South Block sent a note to the embassy of China in Delhi to counter the Chinese propaganda; it spoke of a series of intrusions 'in the Doklan pasture area which lies south of the traditional boundary between Bhutan and the Tibet region of China in the southern Chumbi area.

The note pointed out: 'It is reported that on the 13th of April 1966, a patrol of the Royal Bhutanese Army observed that a Chinese patrol of 13 men had intruded about three miles south-west of Sinchel La.'

'The Tibetan grazers were informed by the Bhutanese patrol that they were in Bhutanese territory and asked to withdraw.'

The situation continued during the following months.

The problem was that the trijunction between Tibet (China), Bhutan and India had never been agreed upon.

The situation has not changed today.

'Following that, with much fanfare (the) Indian government set its propaganda machine in motion raising a hue and cry about Chinese intrusions into Bhutan and the Indian prime minister Indira Gandhi came out in person to conduct the campaign against China.'

It mentioned the 'Doklam pasture' where the Chinese intrusions took place, located in the vicinity of the trijunction of the boundaries of China, Bhutan and Sikkim.

At that time, Beijing tried to create a wedge between India and Bhutan: 'The King of Bhutan has long since solemnly declared that "Bhutan is an independent sovereign State and has the right to conduct her own foreign affairs".'

'(But) inheriting the mantle of British imperialism, the Indian government has all along been pursuing an expansionist policy and bullying its neighbouring countries.'

Like today, the Bhutanese government had issued a press statement on October 3, 1966: 'The Government of Bhutan have, for some time, been concerned with reports received from its patrols of a number of intrusions by Tibetan grazers and Chinese troops in the Doklam pastures which are adjacent to the southern part of the Chumbi Valley.'

'This area is traditionally part of Bhutan and no assertion has been made by the Government of the People's Republic of China disputing the traditional frontier which runs along recognizeable natural features.'

Last week, the MEA issued a press communiqué underlining that 'the two Governments had in 2012 reached agreement that the tri-junction boundary points between India, China and third countries will be finalized in consultation with the concerned countries.'

Despite the fact that Beijing loves to refer to the 1890 Treaty, which was an 'unequal' treaty signed by the Manchus and Great Britain (without the participation of Bhutan, Tibet and Sikkim, the stakeholders), China has clearly broken its promises given to Bhutan and India.

How can a State, which claims to be a responsible power, unilaterally grab a 'disputed' area to build a road on it, especially when it is aware that this road is so strategically located for a neighbour.

Only Beijing can answer this question.

Some say that it is in the Chinese DNA to first change the status quo on the ground and then later to offer to 'talk'.

India has to remain vigilant.

Tailpiece: As mentioned above, 'differences of perceptions' on the Tibet-Sikkim-Bhutan and the Sikkim-Tibet borders are not new.

China used fully these differences during the Indai-Pakistan conflict of 1965, threatening to interfere in the war by opening a new front in Sikkim.

This has been well documented in the Notes, Memoranda and Letters Exchanged between the Government of India and China (or White Papers) published by the ministry of external affairs in Delhi.

An incident which took place in Delhi on September 24, 1965 is worth relating (it appears in White Paper No XII).

A delegation led by some Indian politicians (one of them would later become prime minister of India), took a herd of 800 goats to the Chinese embassy in Delhi to make a point: Is it worth starting a war over some pastures or simply because herds had crossed an unmarked line?

On September 26, 1965 the Chinese ministry of foreign affairs lodged a strong (not to say rude) complaint to the Indian embassy in Beijing: 'In the afternoon of September 24, 1965, a mob of Indian hooligans went to the gate of the Chinese embassy in New Delhi to make provocation led by Indian officials and Congress leaders and driving a flock of sheep before them.'

The Chinese note continues: 'They made a huge din, yelling that China had invented absurd pretexts for threatening and intimidating India, that China wants to start a world war over some sheep and a few yaks, and so on and so forth.'

The note directly accused Lal Bahadur Shastri's government: 'This ugly farce was wholly instigated and staged by the Indian government.'

It continues in the same tone: 'The Indian government will definitely not succeed in its attempt, by staging this ugly anti-Chinese farce, to cover up its crimes of aggression against China and the wretched picture of its troops fleeing in panic from the Chinese side of the China-Sikkim boundary.'

'For a number of years you have flatly denied that Indian troops had intruded into Chinese territory across the China-Sikkim boundary and built military works for aggression there.'

'Yet within a few days of our demand for the dismantling of the military works for aggression within a specified time-limit, the Indian troops who had intruded into the Chinese side of the China-Sikkim boundary could not but flee helter-skelter under the surveillance of Chinese troops, leaving behind numerous evidence of their crime, thus suddenly exploding the falsehood which you had so painstakingly concocted over these years.'

'How can you succeed in hiding your shame?'

The note concluded: 'In staging a few forlorn and unseemly anti-Chinese demonstrations you have your undivulgeable motive -- to seek reward from the imperialist and modern revisionists.'

'But the Chinese government must remind the Indian government that there is a limit to everything, and that the exceeding of such a limit will not be tolerated.'

A few days later, Delhi simply replied that India is a democracy and demonstrations are allowed. It denied the government's involvement.

Let us hope that the Chinese letters are less rude now than 50 years ago, but then like now, Beijing believes that the best form of defence is attack. 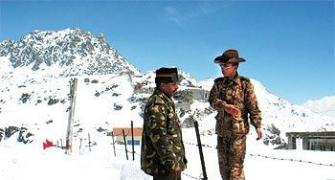