Chief of Defence Staff will need to show tough love

'Since each chief single-mindedly pursues his service’s interests in the competition for turf and in core matters such as budget share. The CDS, therefore, must act as an “honest broker” whose decisions serve the broader national purpose, rather than narrow service interests,' says Ajai Shukla. 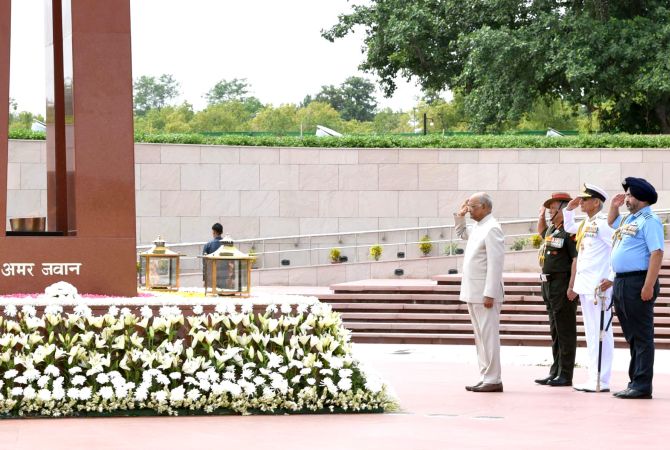 Amidst a worrying economic slowdown, the government has made three major security-related moves in the last 20 days.

First, it terminated the special status of Jammu and Kashmir and bifurcated the state into two Union territories.

How much political resistance and violence this will unleash will only be known when the security clampdown in Kashmir is loosened.

Second, in the realm of nuclear weapons, Defence Minister Rajnath Singh backed away from India’s long-held doctrine of “no-first-use”, declaring that New Delhi might initiate nuclear strikes in certain circumstances, which he did not spell out.

Third, in his Independence Day speech, Prime Minister Narendra Modi announced that he was appointing a Chief of Defence Staff -- a tri-service military commander, who would “make the armed forces even more effective.”

So far, nothing has been divulged about the form and functions of the new CDS.

It remains unclear whether he will be a five-star rank supremo to whom the three service chiefs will report, as recommended by the Kargil Review Committee in 1999 and a Group of Ministers in 2001.

Or, will the new CDS be the watered-down compromise the Naresh Chandra Task Force proposed in 2012 -- a four-star officer termed the Permanent Chairman of the Chiefs of Staff Committee, who would not be the boss of the three service chiefs, but merely the “first amongst equals” (whatever that means in practice).

The creation of a five-star CDS, while only a first step, would signal that political will exists for the root-and-branch reform of higher defence management structures.

On the other hand, creating a four-star PCCSC would immediately smack of tokenism.

That is because little is to be gained from merely upgrading an already existing, and ineffectual, three-star tri-service chief by pinning another star onto his collar.

Ultimately, the value of a CDS will depend upon what powers and responsibilities he is given, and the additional reform this triggers.

What should be the tasks of the new CDS?

The first is clearly to adjudicate between the army, the navy and the air force.

That requires a five-star rank officer, since four-star officers currently head these services.

Tough love will be needed, since each chief single-mindedly pursues his service’s interests in the competition for turf and in core matters such as budget share.

The CDS, therefore, must act as an “honest broker” whose decisions serve the broader national purpose, rather than narrow service interests.

Furthermore, a CDS would constitute a single point of advice for the top political leadership.

Many senior generals, fearing that a CDS perched above them would encroach on their turf and limit their powers, pooh-pooh the notion that inter-service rivalries damage the military’s functional efficiency.

Typically, they trot out the example of cooperation in disaster relief operations to present the soothing (but false) argument that the three services join hands in crises, motivated by a common purpose.

In fact, such cooperation is sporadic, as militaries worldwide have experienced for a century.

When the United States was fighting Japan in World War II, officials in Washington remarked drolly that the most ferocious fighting in the Pacific Campaign was actually between the army commander, General Douglas MacArthur, and his naval counterpart, Admiral Ernest King.

Further illustrating such fratricidal friction, General Eisenhower, who went on to become US president, wrote in his diary: “One thing that might help win this war is to get someone to shoot King.”

Eventually, after continuing inter-service dissonance during the Vietnam War, it took top-down political intervention to radically reform the American military’s command structures, when President Ronald Reagan signed into law the Goldwater-Nichols Act in 1986.

In India, multiple examples of dysfunctional inter-service relations call for our own Goldwater-Nichols-type restructuring.

For example, in the 1962 war with China, the air force was entirely left out of battle.

The Indian Navy remained in harbour during the 1965 Indo-Pakistan war.

General VP Malik, the army chief during the 1999 Kargil conflict, has recounted how he had to arm-twist his reluctant air force counterpart, Air Chief Marshal Anil Tipnis, into providing air support to the army during the early stages of fighting.

Little of this disharmony would be addressed by merely appointing a CDS to languish in an “upgraded” integrated headquarters, without addressing the yawning gulf between the military and the defence ministry.

The new apex body must incorporate all the elements -- military, bureaucratic and financial -- needed for swift and flexible decision-making.

Some tasks for the new CDS are self-evident.

He must oversee long-term planning, especially the three services’ manpower structure, command and communications, the weapons they would field and technologies that must be driven to build an indigenous arsenal.

The CDS would need to “future proof” the three services by anticipating new technologies that might render an entire class of weaponry obsolete -- as offensive cyber weapons and anti-satellite weapons threaten to do to contemporary command networks.

Also, given India’s internal dissonances, the CDS would need to balance between a military structured, trained and equipped for warfighting, and one geared for internal security tasks.

Finally, he would save money by pooling facilities and resources all three services wastefully maintain today.

The most contentious question around the appointment of a CDS is: Should he oversee combat operations, heading a tri-service headquarters that synergises all three services’ combat power?

Or should combat operations be pursued by “geographical commands”, each with its need-based complement of army, navy and air forces?

For example, the Pakistan and China threats could be managed by the integrated western and eastern commands, comprising army and air force elements.

Meanwhile, the Indo-Pacific maritime theatre could be addressed by the south-western and south-eastern commands that would be predominantly naval, but with components of air force and army troops.

The concept of tri-service, geographical commands offers distinct organisational advantages for a global military like America’s, whose Central Command might be fighting a campaign in Iraq, even while its Pacific Command is engaged in a war with North Korea.

The sheer distance between America’s combat theatres requires each to be self-contained.

In the Indian context, where the operational commands are in close proximity, it would be wasteful to emulate the American structure.

It would be especially fruitless to pre-commit air force squadrons to fixed commands, since the large combat ranges of modern fighters (further enhanced by mid-air refuelling) make it theoretically possible for a fighter aircraft to take off from an airfield under one command, and strike targets in two other commands in a single sortie.

Given this flexibility, it is no accident that the air force is the greatest opponent of fixed affiliations.