'The Modi-Shah duo won't leave the war zone without putting up a tough fight.'
'Modi's slogan for 2019 could well be, "I have done much. Give me one more chance to do even more".'
'2019 will be tough for the BJP.'
'But it will be even tougher for the Opposition -- united or otherwise,' says R Rajagopalan. 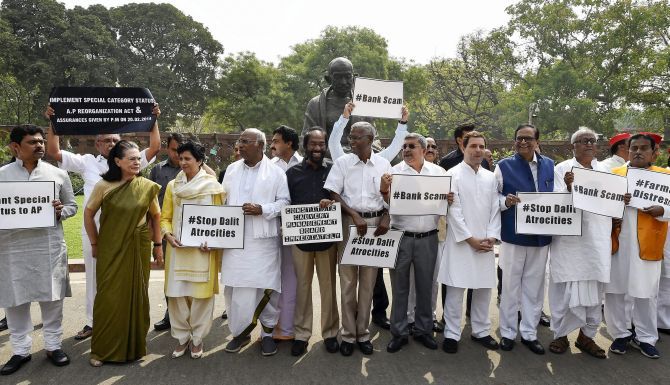 Rahul also said the Bharatiya Janata Party would not return to power in 2019.

Though the Congress is well within its right to dream big, this time it seems Rahul has gone too far.

What makes him confident enough to make such statements?

Is it because of the BJP's defeat in the Gorakhpur and Phulpur by-elections?

Or the Congress winning a few assembly segments here and there?

Or is it due to Rahul's talks with Communist Party of India-Marxist General Secretary Sitaram Yechury?

Or due to the rising discontent against the BJP in and out of Parliament?

Certainly, the nation's mood is changing and the BJP has taken a beating on several crucial issues, most recently on the Nirav Modi-Mehul Choksi fraud, as well as over the Dalit protests

But that does not mean the BJP can be written off in 2019.

A little over two months ago, the BJP snatched Tripura from the CPM.

With this, the era of Communism in India is all but over. The Left is losing strength in West Bengal and only holding whatever ground it can in Kerala.

On the other hand, BJP leaders are politicking 24x7 and not resting on their laurels.

Today, the BJP rules 21 states and is the single largest party in the Rajya Sabha.

Its cadre increases every month. The BJP has volunteers and workers in every district for booth-level management.

Is there any political party as big as the BJP as of now?

In contrast, the Congress's vote share is fast receding at the national level.

Rahul may think of defeating the BJP with a united Opposition behind him. But are the Opposition parties united?

And even if they unite, will they accept Rahul as their leader?

All the top Opposition leaders have their own egoes and ambitions, because of which they tend to split soon after entering into an alliance.

Can Mamata Banerjee and the Communists come together?

Will Sharad Pawar be comfortable with the Shiv Sena?

The Mahagathbandhan, or Grand Alliance, of Lalu Prasad Yadav and Nitish Kumar in Bihar broke up within two years, so how long will the alliance of Akhilesh Yadav and Mayawati last?

And can the Telugu Desam Party and the Yuvajana Shramika Rythu Congress Party forget their differences?

All this is still not clear and May 2019 is only a year away.

What seems clear at this is stage is that no regional party is ready to give the Congress the importance it once enjoyed.

Will the DMK agree to allot 20 Lok Sabha seats to the Congress in Tamil Nadu?

Will Mayawati and Akhilesh offer 40 seats to the Congress in UP?

Will Lalu agree to give 20 seats to the Congress in Bihar?

If not, then, in the event of a united Opposition contesting the next general election, by how much can Rahul improve the Congress's current tally of 48 in the Lok Sabha?

Prevailing political combinations and caste-religion equations in north India do not paint a rosy picture for the Congress.

So how can Rahul say that Modi will be defeated if Akhilesh and Mayawati come together?

Leave alone defeating Modi, can Rahul ensure that he himself or his mother, United Progressive Alliance Chairperson Sonia Gandhi, will retain their respective seats in Amethi and Rae Bareli if their party is ignored by the Akhilesh-Mayawati combine in UP?

Senior Opposition leaders like Samajwadi Party chief Mulayam Singh Yadav, West Bengal CM Mamata Banerjee and Rashtriya Janata Dal chief Lalu Prasad Yadav may accept Sonia Gandhi as their joint leader. But this will not be the case with Rahul in the saddle.

And there is no Opposition leader who can be said to be on par with Prime Minister Narendra D Modi in the popularity ratings.

However, on the flip side, the BJP does not have a strong regional ally.

Most of its allies have deserted the BJP or in the process of deserting it.

The TDP walking out of the ruling National Democratic Alliance was a major setback to the BJP. But the BJP has not much to lose in Andhra Pradesh.

Also, the Modi-Amit A Shah duo will not easily leave the war zone without putting up a tough fight.

Modi's slogan for 2019 could well be, 'I have done much. Give me one more chance to do even more'.

Indeed, 2019 will be tough for the BJP. But it will be even tougher for the Opposition -- united or otherwise.