In the light of India's increasingly 'darkening' threat environment and the convergence of strategic interests between China and Pakistan, the IAF's declining combat capabilities are a cause for concern, says Brigadier Gurmeet Kanwal (retd). 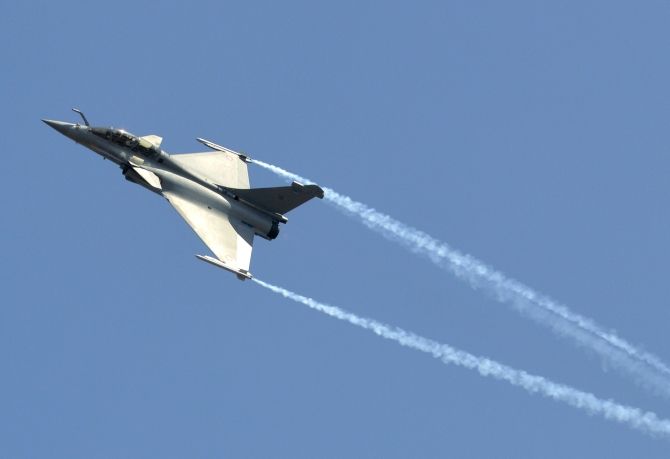 In a rare public admission, Air Marshal B S Dhanoa, Vice Chief of Air Staff, said while briefing the media recently on the eve of Exercise Iron Fist, a fire power demonstration of the Indian Air Force that 'numbers are not adequate to execute a full air campaign in a two-front scenario.'

In an impressive monograph, Troubles They Come in Battalions: The Manifold Travails of the Indian Air Force (Carnegie Endowment for International Peace, March 2016), Dr Tellis analyses the IAF's force structure and suggests measures to improve its combat efficiency to meet future threats and challenges.

Dr Tellis highlights India's increasingly 'darkening' threat environment in view of the convergence of strategic interests between China and Pakistan and their rapidly modernising air forces.

While noting approvingly that 'the IAF remains exemplary among air forces in the developing world,' he writes that it is gradually losing the combat edge that it has enjoyed since the 1971 War with Pakistan because of the superior fighter aircraft in its inventory and larger numbers.

Dr Tellis accepts the aspirations of Indian analysts for a combat strength of 60 squadrons for the IAF to be able to effectively dominate the skies in a two-front threat environment.

However, he points out that the number of the IAF's frontline squadrons has been steadily declining. 'Today, against the authorised total of 39.5 squadrons,' he writes, 'the IAF can barely muster 32 squadrons of fighters... China and Pakistan field about 750 advanced air defence/ multi-role fighters against the IAF's 450-odd equivalents.'

The large-scale depletion in the IAF's combat capability can be attributed to 'serious constraints on India's defence budget, the impediments imposed by the acquisition process, the meagre achievements of the country's domestic development organisations, the weaknesses of the higher defence management system, and India's inability to reconcile the need for self-sufficiency in defence production with the necessity of maintaining technological superiority over rivals.'

Dr Tellis systematically analyses the present holdings and future requirements of fighter aircraft in the lightweight (MiG-21/Tejas LCA), medium-weight (Rafale MMRCA) and heavyweight (SU-30MKI/PAK-FA Indo-Russian fifth generation fighter) segments and concludes that the IAF faces serious challenges in all of them.

'The Tejas Mark 1 is handicapped by significant technological deficiencies; the prospects for expanding the MMRCA component to compensate for the Tejas' shortcomings are unclear; and the IAF's reluctance to proceed fully with the PAK-FA programme could undermine its fifth generation fighter ambitions.'

Dr Tellis discusses the options available to India in each segment in detail. According to him, India should be cautious about acquiring more than six squadrons of the Tejas LCA; it should opt for the 'cheapest' Western MMRCA available and enlarge its requirement in this segment; and, it should continue to invest in its collaboration with Russia for the fifth generation fighter aircraft PAK-FA.

He dwells in length on the advantages and shortcomings of the major Western contenders in the middle-weight segment, including the two European aircraft, the Rafale and the Gripen NG, and the two American aircraft, the F-16IN and the F/A-18E/F Super Hornet.

He writes that both Boeing and Lockheed Martin would be amenable to manufacturing their fighters in India with transfer of technology. However, India has faced difficulties with American technology in the past, partly due to its reluctance to sign some of the foundational agreements like CISMOA, BECA and LSA.

As a case in point, the C-130J transport aircraft for the Special Forces came without some high-tech equipment.

Dr Tellis highlights the difficulties that will be involved in integrating just 36 Rafales in an aircraft fleet that is already 'widely diversified', that too at a price of approximately $9 billion -- almost one-fourth of India's current defence budget.

However, he does not comment on the view of some non-aviator Indian analysts that the MMRCA (Medium Multi Role Combat Aircraft) is too expensive, especially if acquired in small numbers, and that the IAF should acquire larger numbers of the Russian-designed SU-30MKI and encourage the indigenously manufactured Tejas LCA, in line with the government's policy thrust to 'Make in India.'

While this view has some merit in it even though the serviceability rate of the SU-30MKI leaves much to be desired, the LCA is still three to five years away from being declared fully worthy of undertaking combat operations.

If the deal to acquire 36 Rafale fighters does finally go through, it may be prudent to manufacture the aircraft in India with transfer of technology -- provided the terms offered by the company are suitable.

Dr Tellis emphasises the importance of providing accurate and timely 'close air support' to the army in the required quantities.

This facet of air force operations will be critically important in a future conflict due to the limitations imposed on manoeuvre in the mountains by the difficulties presented by the terrain and in order not to risk crossing Pakistan's so-called nuclear redlines in the plains through deep manoeuvre.

Hence, it is necessary for the Indian armed forces to augment their firepower capabilities by an order of magnitude.

He carefully analyses the requirement of acquiring dedicated close air support aircraft to support ground operations and concludes that the American A-10 Thunderbolt would be a good option for India.

When the MiG-27 enters the phase of obsolescence in five years' time, it would be good for India to begin inducting an aircraft that is designed to strike targets on the ground like the A-10 or the Russian SU-39.

The process for acquiring such an aircraft must begin now. Simultaneously, the holdings of precision-guided munitions must be significantly enhanced to achieve stocking levels of up to 30 per cent.

Also, the time has come to introduce unmanned combat air vehicles (UCAVs) or combat drones into service in large enough numbers to influence operations on the ground.

Dr Tellis brings to bear his considerable knowledge and experience as an analyst with Project Air Force at the RAND Corporation and later at CEIP to analyse a complex subject and explain it in easy-to-understand terms.

His latest offering should be compulsory reading for policy makers and members of India's strategic community.