'Given the present force levels, India cannot fight and win.'
'India can't hope to terminate the conflict on India's terms and impose the nation's will upon the adversaries,' says Brigadier Gurmeet Kanwal (retd). 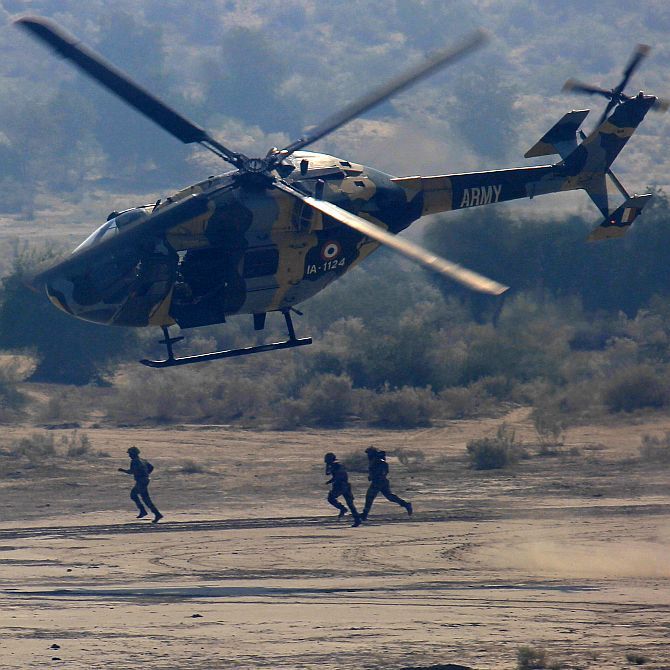 On October 5th, Air Chief Marshal B S Dhanoa, the chief of the air staff, said, 'The Indian Air Force is capable of effectively countering any threat from China while engaging in a two-front war also involving Pakistan.'

One month earlier, on September 6, 2017, the army chief, General Bipin Rawat, had said the country must be prepared to fight a two-front war.

The factors that drive such a threat perception and the challenges in facing a two-front situation need to be dispassionately analysed.

With both China and Pakistan, India has unresolved territorial disputes.

In addition, India had to launch military operations to evict Pakistani soldiers who had intruded across the Line of Control in the Kargil district of Jammu and Kashmir in 1999.

China sees India as a strategic competitor and a rival for leadership in the Indo-Pacific region.

As part of its grand strategy, China seeks to confine India to the backwaters of the Indian Ocean as a subaltern State and is using Pakistan as a proxy to keep India embroiled in conflict.

The India-China relationship has been stable at the strategic level, but it is marked by political, diplomatic, and military instability at the tactical level.

While transgressions by China's People's Liberation Army across the undemarcated Line of Actual Control are perennial, for many decades China had supported insurgencies in India's north-eastern states.

Pakistan, the international community now agrees, is a State sponsor of terrorism and has been providing support to militancy and radical extremism in J&K since 1989-90.

On the diplomatic front, China has been particularly assertive in recent years.

China refuses to allow Masood Azhar, the founder of the Pakistan-based Jaish-e-Mohammad -- an UN-designated terrorist group -- to be labelled a terrorist by the UN sanctions committee.

It has blocked India's membership of the Nuclear Suppliers Group as it wants simultaneous entry for Pakistan, one of the world's worst proliferators.

China objects every time an Indian political leader visits Arunachal Pradesh -- an Indian state that it claims -- and had lodged a protest even at the Dalai Lama's visit to a monastery in the state.

The collusive nuclear warhead-ballistic missile-military hardware nexus between China and Pakistan, described by both as an 'all-weather friendship', has grown to menacing proportions.

It has been deepened further with the China-Pakistan Economic Corridor beginning to take shape.

The CPEC is part of China's belt and road initiative (BRI) that seeks to extend China’s strategic outreach deep into the Indo-Pacific region, give a fillip to its flagging economy by generating large-scale construction activity and create new markets for its products.

Passing through disputed territory in Gilgit-Baltistan and Pakistan occupied Kashmir, the $54 billion project will link Xingjiang province in China with Gwadar port on the Makran coast, west of Karachi.

Though Pakistan is raising an infantry division of approximately 12,000 personnel to provide security for the CPEC against terrorist attacks, eventually PLA soldiers are bound to be inducted for this purpose just like it has already happened in Gilgit-Baltistan, the erstwhile Northern Areas.

The presence of PLA personnel in Pakistan in large numbers will further vitiate the security environment.

The history of military collusion between China and Pakistan goes back over fifty years.

During the 1965 and 1971 India-Pakistan wars, China had made some threatening military manoeuvres in Tibet in support of Pakistan.

The aim was to keep Indian military reserves tied down so that additional divisions could not be moved from the eastern theatre to the western front.

It is also noteworthy that during the Kargil conflict in 1999, Chinese military advisors were reported to have been present at Skardu in Pakistan occupied Kashmir.

It was in this context that General Deepak Kapoor, then then COAS, had said during the Army Training Command doctrine seminar in late-December 2009 that the Indian army must prepare for a two-front war.

Several armed forces chiefs have repeated this formulation since then and it has become the sine qua non for India's defence preparedness.

In fact, some former chiefs have spoken of the need to prepare for a two-and-a-half front war.

The implication is that the army is already engaged in a 'half-front war' by way of counter-insurgency operations that drain resources in J&K and some of the north-eastern states.

Also, during a future war with either China or Pakistan, given the unstable internal security environment, there will be a requirement to keep the internal lines of communication safe from interdiction and sabotage. The term 'half-front war' was coined by General Shankar Roychowdhury, former COAS.

The conventional wisdom in the policy community in New Delhi is that if there is a war between India and Pakistan, China may not come to Pakistan's aid militarily unless Chinese troops are directly under attack, for example in Gilgit-Baltistan.

China will raise the issue in the United Nations Security Council, provide weapons and defence equipment as well as logistics support and probably demonstrate some military manoeuvres in Tibet to pin down the dual-tasked divisions, as it has done in the past.

However, if there is a war between India and China, Pakistan is certain to take advantage of the situation and open another front against India.

Pakistan's offensive operations will probably begin in J&K, but may not necessarily remain limited to J&K.

Can India fight both China and Pakistan simultaneously?

The armed forces will be stretched to the limit, but, given adequate resources, they could fight a holding action successfully though with large-scale casualties.

However, given the present force levels, they cannot fight and win.

They cannot hope to terminate the conflict on India's terms and impose the nation's will upon the adversaries.

As such, the political and military aims and objectives will have to be kept low.

Ideally, India's strategic partnerships should be of sufficient significance to ensure that India is never required to fight a two-front war.

Though it was not a military alliance, the Treaty of Peace, Friendship and Cooperation, which India had signed with the erstwhile Soviet Union before the 1971 war, had ensured that China refrained from aiding Pakistan militarily during the war.

The Indo-US strategic partnership has been described as India's 'principal' strategic partnership. Its defence cooperation element must be taken to the next higher trajectory -- joint threat assessment, joint contingency planning and the conduct of joint operations when necessary -- so that a situation similar to 1971 obtains in future and India's military adversaries are deterred from ganging up against India.

IMAGE: An Indian Army's Dhruv transport helicopter takes off after inserting soldiers on the ground during the India-Russian joint military exercise 'INDRA 2013' in the Thar desert, Rajasthan. Photograph: Kind courtesy The Indian Army