'While its people might be a little less resistant to changing for its greater good, New Delhi, unfortunately, is also evolving into an ugly city of which one must remain wary to survive its rising incidents of violence and crime,' says Kishore Singh.
Illustration: Uttam Ghosh/Rediff.com 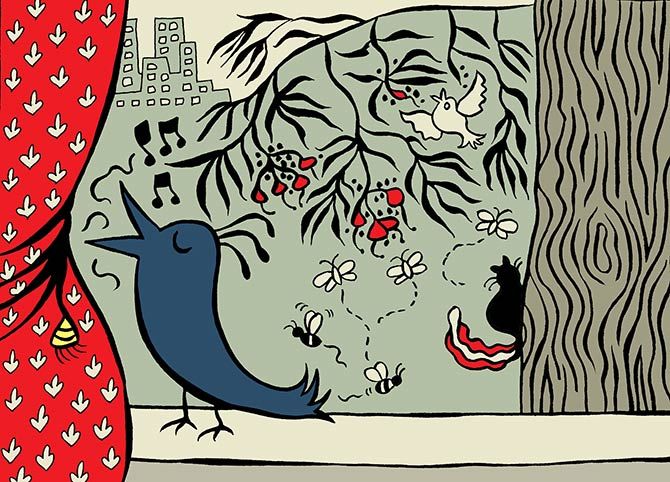 Something extraordinary happened, something so astounding as to be unbelievable.

Delhiites, known for their prodigious insensitivity and apathy to the greater good, purveyors of excess consumption and bonhomie, hunkered down and celebrated the quietest Diwali I have known in decades.

When we came out to our balcony in the evening, after the sun had set, to admire the lights the neighbours had draped across their homes and on all conceivable foliage -- from which unrestrained surplus there was no respite -- it was to an unbelievable, incredible silence.

Somewhere, in some distance, there was a sputter of firecrackers, sporadic and infrequent, but no whistling 'rockets' assailed us, no flaming 'anars' went up in a burst of polluting incandescence, there was so little sound that the pet dog trotted along on his evening constitutional without once flinching at the hiss of shrapnel.

We woke to birdsong. There was no smoke haze that obliterated buildings, no dystopic orange light that swallowed up everything around it and turned the city into a ghostly world.

Humming birds and hoopoes flitted among the flowers and perched on trees, while bees buzzed busily amidst the flower beds and butterflies flitted drunkenly on nectar.

Squirrels scampered up and down trunks instead of cowering in their nests.

The streets were free of litter. No stink of cordite assailed our senses.

The news across various sites reported a decline in the city's air quality, which is probably true: There were some firecrackers, after all, and the smoke from stubble fire in surrounding regions had wafted into the capital.

But to be able to see a sky, even if it is grey, to feel the dew, to smell the garden, to be surrounded by buds and flowers, to hear chirrups and bird calls, is to be sported back in time when we took these sights and sounds for granted, not something to be memorialised.

There is so much that has disappeared gradually from our lives as to be saddening.

Spotting a sparrow, once so ubiquitous, is a jolt of joy. There are fewer parrots and no vultures. The peacocks have disappeared from urban gardens.

Which is why, it gave one pause to think whether a popular citizen's movement had achieved what the government had been unable to previously do.

If, today, the air is a little more breathable than at any time following Diwali in previous years, it is because children and adults made common cause.

Is it too much to hope now that the city's residents will resist taking out their guns to fire shots in the air to celebrate a wedding?

Will we restrain ourselves from burning fallen leaves?

Will we choose public transport over private vehicles?

While its people might be a little less resistant to changing for its greater good, New Delhi, unfortunately, is also evolving into an ugly city of which one must remain wary to survive its rising incidents of violence and crime.

There are increasing instances of muggings as, daily, a friend or acquaintance or colleague is robbed in the middle of a busy street.

Drunk youngsters continue to smash cars and claim lives speeding through its boulevards at night.

We rush past accident victims and those injured in our reluctance to get involved with its infamous red tape and harassment by government officials.

But as long as we continue to lock our doors on the city outside, can any citizen's movement truly claim to act on our behalf to give back what we have inured ourselves against inside?