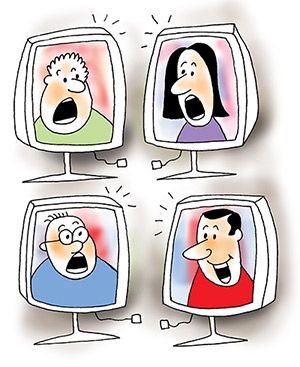 'Soon enough, we were out shouted. The journalist had a multiple agenda -- he berated the Government, the bureaucracy in general and the UPSC system that selected them.'

You may have wondered how the 'talking heads' on television news channels, who sprout wisdom night after night on varied subjects, are chosen. Some, of course, are familiar faces to you: Representatives of political parties, some on the rise, others on decline; other faces that you are just accustomed to say Shobhaa De or Suhel Seth. But there are other experts.

Are they selected based on their looks, sartorial elegance, domain knowledge or through random luck?

I used to be curious and rue the fact that I only got an occasional call for 'this evening's discussion' and that too by channels that neither my cablewallah nor Tata Sky carried!

One day, not too long ago, I got a call from a well known channel, not being named here, since I am hoping that they will call me again some day.

'Sir, can you please spare us your valuable time from 8-9 pm tonight for a discussion?' asked a young lady, who introduced herself as from guest relations. I had heard of this job title only in hotels in my career, but am getting used to having them now in hospitals, banks and in other unexpected places. The young lady seemed to be consulting a list, as she read out my name.

'I had another important engagement, but I guess, I can rearrange my schedule. What is the subject of discussion?' I asked. My years as a diplomat had taught me that whenever possible you first feign busyness and then quickly say that you are up to it.

It is only thereafter that you think about the subject. Besides, I assumed that the discussion would be about one of the hardy perennials that crop up every few months: ISI-sponsored cross-border terrorism; intrusion from China; India's ineffectual strategy towards smaller neighbours etc.

I am not a great expert on any of these, but know that that is not an essential qualification. What kind of a retired ambassador am I, if I cannot hold forth confidently on what is wrong with India's policy on any of these questions.

I was surprised by what came next.

"It is a discussion on the CSAT examination under the UPSC for the civil services preliminaries," she said breathlessly, again seemingly reading from her paper. "We are looking for a Foreign Service officer," she added.

You may have forgotten this issue now, but some months ago, it was a hot topic, comparable to cross-border terrorism from Pakistan. Violence was in the air, essential to make a topic particularly topical, buses were being burnt in Delhi, but this time by those aspiring to maintain law and order one day -- the wannabe civil servants.

I had some idea about the controversial examinations -- I will come to it in a minute -- had strong views on it, and was ready to jump in, since I was being asked.

Besides, there were four hours to go before I had to leave for the studio and that is enough to master any subject for television, I thought, whether nuclear fusion or human genome.

But an innate sense of caution made me ask another question. "The discussion will be in English?"

"No, Sir. It is a live show in Hindi. Smita Madam is the anchor."

"Oh! My Hindi is a bit shaky. Actually I am a Dakshin Bharatiya," I said, borrowing the phrase from my colleague in the IFS, Syed Akbaruddin, the spokesperson for the Foreign Ministry, a fellow South Indian who speaks plenty of Hindi but with a disarming qualifier.

"We know that you are a Madrasi Sir. That is why we have chosen you. We were told to find a foreign service officer, not comfortable with Hindi, as the whole CSAT issue is about the disadvantages of Hindi-speaking candidates," guest relations said and rang off in a hurry assuring me that I would be picked up at 7 pm.

It is time to summarise the topic for those who did not follow this burning issue at that time. The UPSC, the body that conducts the IAS/IFS/ IPS and other civil services examinations, had introduced a new compulsory paper. This paper tested a candidate's inherent abilities: Analytical aptitude by reading and understanding complex texts, and the quantitative aptitude by answering questions on charts and graphs and such like.

The underlying logic was that any aspirant for any administrative position should have basic language, comprehension and analytical skills and that such a test would be more useful than evaluating one's proficiency in an academic subject say Anthropology or Geology. In short, something new and practical had been introduced.

A storm had ensued. All the hundreds of coaching institutions that train tens of thousands of hapless young men and women in learning rote answers had got shaken by this innovation in the test, which made it difficult to coach students.

The inevitable cry had broken out that there was discrimination against those who were from Hindi medium schools, from rural backgrounds, from backward sections, from irrational mindsets. The UPSC was condemned for denying equal opportunity and a level playing field, for creating entry level obstacles for the majority.

Protests had been staged, fasts were undertaken, and vehicles torched.

Meanwhile, experts were being called for television discussions and sometimes with a section of the agitating students too as participants. This was the context in which a South Indian and therefore a non-Hindi speaking Foreign Service officer -- me -- had been identified as a suitable expert. Why? Don't ask me. I was not complaining.

I reached the studio ahead of time having prepared myself with Hindi words for phrases like 'social injustice', 'entrenched interests', 'rural background' etc.

The panel consisted of a former top civil servant who had also served as a member of the UPSC, myself again representing the Establishment, and to balance us, a sociologist to expound on India's caste, class and other perennial divisions, and a veteran journalist who seemed to believe that all bureaucracy was innately evil. There were also two leaders from the agitating student class.

We had an amicable chat while we waited in the somewhat shabby VIP lounge and with a cup of watery coffee and a dab of make up to brighten the face, we were ushered in to the studio.

We were introduced by Smitaji, the anchor. I was presented as someone who had overcome the disadvantages of not knowing Hindi and as someone who stressed the need to know English in an international context. Not exactly accurate and not helpful under the BJP reign!

Asked to present my views first, I dutifully upheld the merits of the new examination and the need to test competence and logical reasoning in a potential civil servant, no matter what his background.

The former UPSC member took pains to explain how much thought had gone into designing the new scheme. Our position seemed simple, rational and unassailable.

We were saying that in an examination that was to select people for key careers in the government, ascertaining the ability of candidates was the priority, and all the issues of historical and social disadvantages were in any case addressed by the reservations and quotas that had already been a part of the system.

Soon enough, we were out shouted. The journalist had a multiple agenda -- he berated the Government, the bureaucracy in general and the UPSC system that selected them. Nevertheless, he argued that to join the IAS was almost a matter of birth right of any student which was now being questioned.

The sociologist vividly painted an image of those underprivileged students who studied under a street light or under a tree -- an image from the fifties -- and how unfair it was for these one legged candidates so to speak, to compete in a race, with two legged sprinters from, what else, convent schools and St Stephens.

The students brought to the studio as the participant audience kept groaning at the very mention of the word 'merit' and clapped at every denunciation of the social injustice.

We went around with our views twice and at the end shook hands and agreed that it was a good discussion. Different perspectives had been aired, contradictory views expressed, and no conclusions reached. What more can you ask from a television debate? "This agitation will go on and we will call you again. But next time please be louder and dress in brighter colours," I was told by the producer, as I left.

Two days later the government announced that the new test would not count in the examination and alas, the issue disappeared along with my television visage.