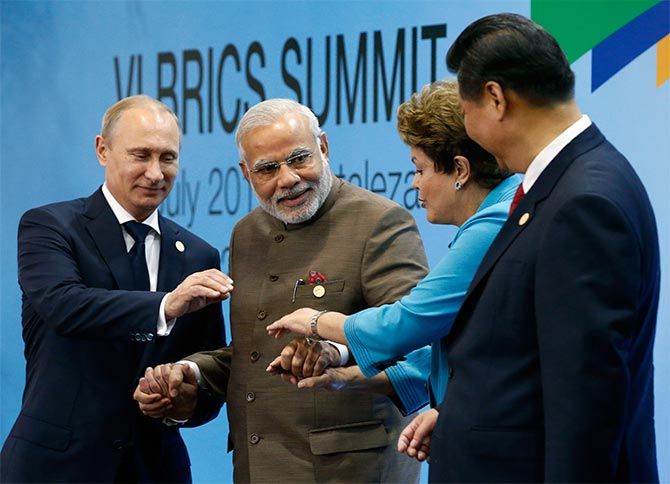 Srikanth Kondapalli on what to expect from the seventh BRICS summit meeting to be held in Russia in July.

The seventh BRICS Summit is to be held at Ufa in Russia on July 9-10. As the rotating chair of the event -- in addition to the Shanghai Cooperation Organisation meeting which will also be held at the same venue -- Russia had been making active preparations since early 2015.

For Russia, the meeting is provides an opportunity to display diplomatic skills in projecting its image specifically when it appeared to have been isolated following the Ukrainian developments. Its economic growth seems to be faltering with the sanctions imposed by the European Union, its energy exports are dwindling as is its currency.

With restrictions imposed on its assets in Europe, Russia is looking for a way out of this isolationism. It has had tie-ups with China in the energy field as well as on the currency issue. Russia and China have stepped up their relations as exhibited in the $400 billion gas supply deal in May 2014; plan to build a new $300 billion high-speed railway between Beijing and Moscow; Russia joining the Chinese-proposed Asian Infrastructure Investment Bank and the October 13, 2014, currency swap deal worth $24.4 billion. Russia is also coordinating with China in the infrastructure projects, although Moscow is wary of the spreading Chinese influence in Central Asia and others.

In this backdrop, the Russian priorities are multifarious. Firstly, as the Russian President Vladimir Putin stated in March, BRICS has ‘consistently advocated’ peaceful settlements in international conflicts and “condemned any attempts on the use of force and interference in the internal affairs of sovereign states.” The most effective use of the five-nation economic bloc would be to “improve security and stability in the world.” “That will be the focus during Russia’s presidency in BRICS,” the Russian leader emphasised. This could bring Russia into the limelight.

Secondly, strengthening economic partnerships was mentioned by the Russian side. These include free trade agreement proposals of the Eurasian Economic Union -- of which Russia, Kazakhstan, Belarus, Armenia are currently members, with Vietnam, Tajikistan, India and China likely to join.

Russia is also concerned about the rouble stabilisation. At the BRICS Business Forum meeting at the sidelines of the St Petersburg International Economic Forum held in June, first deputy minister of economic development of the Russian Federation Alexei Likhachev stated that one priority of Russia's BRICS presidency is to develop an economic partnership strategy for the BRICS countries.

This partnership strategy identifies areas of growth and designates targets and targeted sectors that will become our development priorities. According to him, another important goal for the BRICS governments is the removal of barriers to trade in services and investment

Thirdly, as a major priority, launch of the BRICS New Development Bank. Russia became the first of the BRICS partners to ratify the NDB in March. It had already allocated funds in the federal budget for 2015. Russia is supposed to contribute $2 billion during seven years.

Fourthly, the BRICS may see expansion plan. Russian Deputy Finance Minister Sergey Storchak in May 2015 had invited Greece to be the 6th member of the New Development Bank. Greek Energy Minister Panagiotis Lafazanis stated that his country is likely to join as an equal partner of the NDB.

Sixthly, the first working meeting of BRICS ministers of culture was held in Moscow in June 2015. According to Minister of Culture Vladimir Medinsky, the agreement at this meeting is for “expanding our citizens' access to each other's cultures and developing horizontal ties between our cultural institutions”. This is to be ratified at Ufa meeting.

Seventhly, the 9th India-South Africa ministerial conference in Durban in May decided to issue multiple entry business visas for longer periods and the exploration of the proposal to introduce a BRICS business travel card. This is likely to be adopted in Ufa. Proposed at the 5th BRICS meeting at Durban, the card’s goal is to simplify different kinds of visas as it proposes five-year validity with multiple entries to all BRICS countries.

In addition, the 7th BRICS summit is likely provide China with more opportunities. China’s engagement with the other BRICS countries is expanding substantially. Brazil exported 5.4 million tonnes of oil to China from January to May, 2015 accounting for 35 per cent of Brazil’s total oil exports in the same period.

Overall, President Xi Jinping had announced $250 billion in investment in South America, including the $10 billion 3,300-mile hi-speed railway from Acu near Rio de Janeiro to the Peruvian coast through the Amazon and Andes.

With India, China had made major moves recently. During President Xi Jinping’s visit to New Delhi last September, $20 billion in investments was announced for the next five years.

Subsequently, during PM Narendra Modi’s visit to China, a total of $32 billion were signed with the government as well as business groups, although President Xi’s April 2015 announcement of $45 billion for the China-Pakistan Economic Corridor is resented by the Indian side due to the Kashmir issue.