Whether we like it or not, popular television and cinema culture is what impacts the youngsters of the country the most. I am not advocating censorship but a sense of responsibility in depicting women in the big screen, says Sriram Balasubramanian.

I walked into the cinema hall at around 2 pm last week. I had no expectations since my friends had dragged me along to see Dabaang 2 of all movies. Despite the illogical storyline with over-the-top dialogues, I was shocked when Kareena Kapoor's so called item number came on screen. The theatre, which was subdued till now, suddenly turned into a frenzied rage that demonstrated visible aggression, and filthy language.

So why does the mob's reaction to an item song matter? What is the big deal in that?

This matters because cinema and popular culture is at the heart of the Indian psyche. The incident I referred to above did not happen in Delhi or Kolkata or Mumbai or Pune. This incident happened in Chennai; the state which is least associated with Hindi in the Indian union and the city which has deep conservative roots. More than the mob in the theatre, what disturbed me the most was the commoditisation of women in popular culture.

In today's popular culture, women have been portrayed as mere commodities on numerous occasions. Nothing plays a more direct role than commercial cinema and soap operas. The "100 crore" masala hits are the drabbest caricatures of women that one could ever see. In every single hit, there is surely one item song; a song which makes the women do a mini striptease with no linkage to the story in anyway.

Not only does this pour filth into the viewer, it trivialises women and projects them as mere sex objects. In a cinema crazy country like India, it makes the women the object of compulsive lust and makes her the epitome of someone who literally dances to the tunes of the male. Add to this the presence of soap operas which demonises the idea of women and makes her the victim in every episode.

There is excessive noise and negativity and sadly the stories always depict women as victims or villains who create trouble. This impression has a lasting impact of the mindset of the viewer, especially youngsters in a country like India where there is barely any norm on what children are advised to see.

Unlike in the western world, there is barely any distinction in India between content for children and adults. My 14 year old cousin could walk into any theatre or television show and watch whatever he likes. Whether it is a violent reality show on prime time television or an item song on the big screen; there is no restriction on viewing adult content. There is no restriction on youngsters who are allowed to see content that is beyond the comprehension of their age.

Since popular television culture has a reach across the rural urban divide, the impact is stark on people who are just entering into adolescence. These youngsters are at a relatively feeble teenage period, where hormonal changes are at its peak, are exposed to such gruesome depictions of women in the silver screen in cinemas. This is likely to make them take what they see for granted and approach their daily lives in a similar fashion. In addition, the impact of these is much more on the youngsters who are aspirational yet not educated and are not provided with educated parenting.

Though the reasons above have had a considerable impact on individuals, the responsibility is equally on parents to take a matured stand on what children could see. Parenting is a crucial aspect which is given for a toss in the busy rush hour lives of urban India. When was the last time you had heard of women role models being mentioned in a household? When was the last time one discussed the need for women to be treated with dignity and parity and all costs?

Even though the middle-class chatterati loves to talk, the reality is that very few people are brought up with values system that primarily emphasis on treating women with dignity and respect. This aspect is often taken for granted and assumed in modern society which is filled with negativity about women all over.

Whether we like it or not, popular television and cinema culture is what impacts the youngsters of the country the most. I am not advocating censorship but a sense of responsibility in depicting women in the big screen. It is imperative that the stakeholders in this avoid making women commodities in their ventures and be responsible in showing restraint while depicting women in a commoditising light. Otherwise it would lead to a further degeneration of the impression that it leaves on the young minds of the country.

The minds of young India shouldn't be raped with filth, it needs to be protected more than anything else.

You can get in touch with the author here. 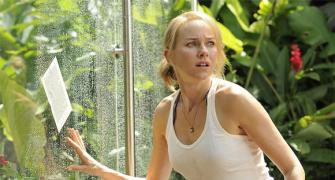 Naomi Watts: I love everything about India

What drives the Indian male to rape?

How to shame the shameless sexual predators