It is clearly a sign of the changing times that Rajnath Singh is now working in tandem with both Narendra Modi and Arun Jaitley, says Poornima Joshi

The obvious design in selecting the Bharatiya Janata Party’s top political team -- which will steer the principal opposition party towards the 2014 general elections -- is to place Gujarat Chief Minister Narendra Modi in a commanding position. By inducting Modi and his close aide and former Gujarat home minister -- the controversial Amit Shah -- BJP president Rajnath Singh on Sunday showed how difficult it is for the party to ignore the Gujarat CM.

Modi is now a member of the BJP Parliamentary Board, the party’s top decision-making body, as well as the Central Election Committee, while Amit Shah is the new general secretary, the most crucial post in the day-to-day functioning of the BJP.

Balbir Punj, yet another central player who is believed to be a confidant of Modi, has been made the vice president of the BJP. The next step in Modi’s elevation is believed to be his anointment as the head of the party’s Election Management Committee -- a post that was handed over by L K Advani, the BJP’s prime ministerial candidate in the 2009 Lok Sabha polls, to his then favourite Arun Jaitley.

The clamour has started already with the new addition to the central team.

Party vice president Dr C P Thakur has publicly declared, “Modi is the need of the hour. He is the one the people want. The party has no doubts about his suitability.”

The intention, therefore, is to indicate Modi’s projection as the prime ministerial candidate and still keep a wide enough margin on the issue for allies such as Janata Dal – United to stick to the BJP-led National Democratic Alliance.

As newly-appointed vice president Uma Bharti succinctly stated, “The decision about who will be PM will be taken at three different levels -- by the BJP Parliamentary Board, by the NDA and by the voter”.

An outright projection of a polarising figure like Modi as the PM candidate will leave very little scope for someone like JD-U leader Nitish Kumar, who actively seeks votes from the Muslim community, to remain in the NDA. In the meantime, the BJP can give sufficient foothold to Modi to launch himself nationally and that is precisely what is being done at the moment.

The most controversial step, however, is bound to be Amit Shah’s appointment. Shah has been charged with murder, kidnapping and extortion in the Sohrabuddin Sheikh fake encounter case. The Central Bureau of Investigation has even questioned Shah in connection to the murder case of Tulsiram Prajapati, a key witness in Sheikh’s ‘encounter’.

With elections round the corner, the BJP has obviously decided to act brazen, with a senior leader declaring, “He (Shah) has been framed. Just because the Congress and the media are persecuting him, why should the BJP also do so?”

It is clearly a sign of the changing times that Singh, who had dropped Modi from the BJP’s Parliamentary Board and Arun Jaitley from the chief spokesperson’s post in January 2007, is now working in tandem with both.

The logic at the time for dropping Modi was that it is unfair to other BJP chief ministers -- such as Madhya Pradesh CM Shivraj Singh Chauhan and Chattisgarh CM Raman Singh -- that only the Gujarat CM should be a member of the Parliamentary Board. Though Rajnath is reported to have tried to strike a balance this time round by pushing Chauhan’s case as well for induction in the Parliamentary Board, the BJP’s constitution did not favour this decision.

The party’s constitution allows only 11 members in the Parliamentary Board. Modi’s induction could not be stopped because of the tremendous pressure for his elevation to the national level from the cadre and the fact that after veteran leader Bal Apte’s death, there was a vacancy in the board.

To induct Chauhan, BJP leader Venkaiah Naidu would have had to be dropped and Singh clearly did not have the stomach for it. The other members of the board whose presence does not really count -- Thawar Chand Gehlot and Atal Behari Vajpayee -- cannot be dropped.

Gehlot is a Scheduled Caste leader and there is an emotive element to Vajpayee’s membership in the BJP’s top decision-making body, even if he is too ill to attend any of the meetings.

The presence of Shah, Balbir Punj and Smriti Irani and Modi’s own appointment in the Parliamentary Board and the Central Election Committee can leave no doubt about Modi’s signature on Singh’s team.

But an attempt has clearly been made to reach out to Jaitley, who at one time was so annoyed with Singh for having appointed his bete noire Sudhanshu Mittal as the election in-charge for Assam that he boycotted a meeting of the Election Committee. The olive branch extended to Jaitley has come in the form of extending the tenure of his favourite leaders J P Nadda and Dharmendra Pradhan as the party’s general secretaries.

While the Leader of Opposition in the Rajya Sabha could not have been too happy with the appointment of Rajiv Pratap Rudy and Varun Gandhi as the party’s general secretaries, it is here that the delicate balance struck by Singh becomes visible.

Not only has he tried to keep everyone -- Modi, Jaitley and even Advani -- happy by appointing their favourite leaders in key posts, he has managed to push in some of his own favourites in the process. The BJP president’s political secretary Sudhanshu Trivedi has been appointed as the party’s central spokesperson while others like Rajiv Pratap Rudy, Uma Bharti and Mukhtar Abbas Naqvi also get crucial posts.

Ravi Shankar Prasad finds himself edged out of the organisational structure on account of having got a crucial post -- deputy leader of the Rajya Sabha – in the Parliamentary Party.

Given Singh’s anxiety to keep the Rahstriya Swayamsevak Sangh in good humour, the RSS obviously has more than adequate representation in the central team. Besides appointing Uma Bharti and Prabhat Jha as vice presidents, the RSS has ensured that it has two trusted lieutenants among the general secretaries -- Muralidhar Rao and organisation secretary Ram Lal.

Then there is V Satish, who has been appointed as the joint general secretary, along with Sangh strongman Soudan Singh.

The attempt to reorganise the party’s structure, as Singh would point out, is also to encourage “the youth”.

“There has been an effort to keep the team’s age profile in the range of 40-50 years. We have encouraged younger people like Anurag Thakur, Poonam Mahajan, Smriti Irani, Muralidhar Rao, Rajiv Pratap Rudy, Varun Gandhi, Vani Tripathi and so on. India is a young country,” said sources close to the BJP president.

Altogether, it is a team focused not just on the general elections and the obvious build-up around Modi, but also on the assembly elections scheduled this year.

Former Karnataka chief minister Sadanand Gouda has been elevated to the post of vice president as elections are due in the state later this year.

Delhi leader Arti Mehra has been made a secretary while Vijay Goel has been appointed as the BJP Delhi unit’s president.

The BJP president has obviously matured in his second term. His new team keeps the RSS happy and does not reflect any hostility towards any of his senior colleagues -- Jaitley, Sushma Swaraj and L K Advani. At the same time, he has given a big push to Modi.

For the moment, the BJP seems to be closing ranks in the obvious anticipation of the attacks that will be directed at the appointment of Modi and Amit Shah. 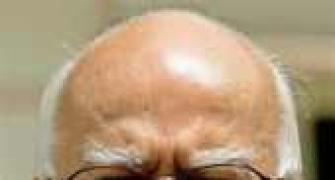 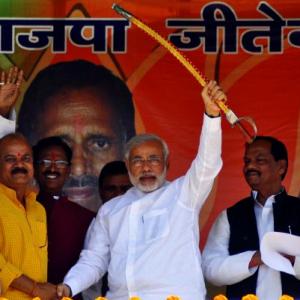