'The current BJP leadership believes the party's expansion across India, and thus their own survival at the top, depends on injecting communal tension into areas where it has so far been largely controlled,' argues Mihir S Sharma. 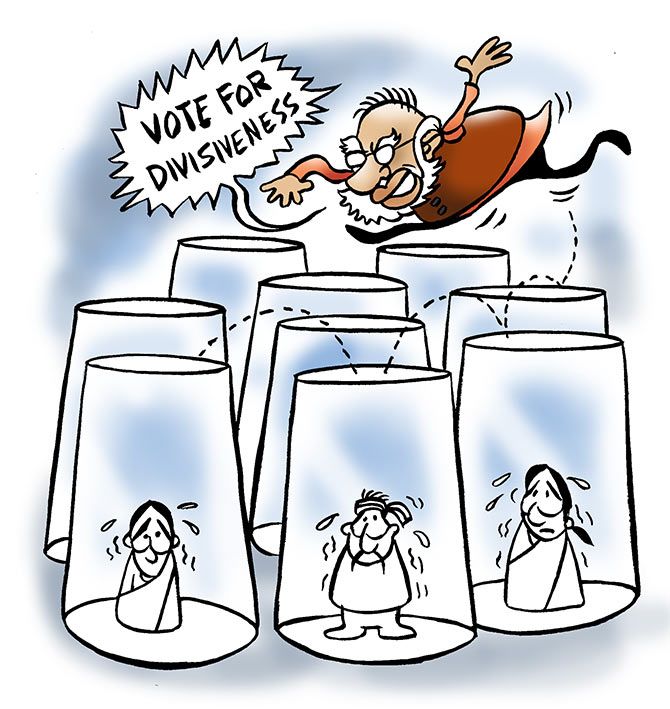 A concern widely expressed in circles friendly to the Bharatiya Janata Party before the last assembly elections in Bihar was that a return of Lalu Prasad's Rashtriya Janata Dal to power in Patna would unleash 'jungle raj'.

The assumption was that even a coalition with the law-and-order focused Nitish Kumar would fail to restrain the RJD.

Well, the RJD is out of the ruling coalition, Prasad is in custody, and the BJP is now Kumar's partner. And yet Bihar is burning.

Foreign journalists are putting out disturbing visuals from the environs of Samastipur and Aurangabad, that they say show Hindutva thugs running amok.

One of the videos seems to show uniformed policemen joining the mobs and chanting along.

For some reason, this does not seem to count as 'jungle raj'.

Meanwhile, in Uttar Pradesh, the return of the BJP to power in Lucknow after a gap of almost two decades was hailed as the return of good, development-focused, government.

The government of Chief Minister Adityanath, however, has been distinguished instead by a focus on supposed 'love jihad', on adding 'Ramji' to Ambedkar's name by statute, on shutting down slaughterhouses, and particularly on lawless extra-judicial violence which the media euphemistically refers to as 'encounters'.

As Harsh Mander points out, this focus 'does not appear strange to the media who dutifully report the stories in which the men shot are almost always Muslims.'

Of course, another sign of the chief minister's firm commitment to law and order is that he has happily shut down cases against past rioters.

And in UP, too, processions through Muslim-majority areas have sparked off communal violence, such as in Kasganj.

In West Bengal, matters are even more bizarre.

Ram Navami in the Bengali tradition is not associated with mobs of sword- and trishul-brandishing young men in saffron marching through the streets in a display of power.

Yet this is what the BJP, in its attempt to plant the seeds of Hindutva in unfriendly soil, has sought to do in the state.

Hindi slogans are plastered across walls, revealing the 'outsider' nature of the provocateurs.

And once again, Muslim neighbourhoods are targeted for this exercise in domination.

There is one difference from Bihar and UP: When violence broke out in the Asansol area, it was widely covered in the national media, and the Union government demanded an explanation from the state.

I wonder what marks Trinamool Congress-ruled Bengal as different from UP and Bihar.

In Telangana -- where the ruling Telangana Rashtra Samiti prides itself on its record of preventing communal clashes since it came to power more than three years ago, in spite of the occasional flare-up in places like Utnoor -- a Ram Navami procession in Nirmal district ended with stones being thrown at the Gulzar mosque, according to the local police.

You'd have to be blind not to see a pattern to all this.

One additional piece of the pattern is the willingness of the local media in many places to amplify the story -- a willingness that is less mysterious now that we have seen the expose of how stories aimed at heightening communal tensions can be easily placed in news television and in the print media.

The silence of the mainstream English-language media can be perhaps most easily explained when one considers the fate of the editor of a national daily who commissioned a feature tracking hate crimes.

It is difficult, thus, to be optimistic about Indian politics in the run-up to 2019.

All one can ask for at this point is a little plain-speaking.

Let us be fed no more tripe about the BJP being a party of governance, please.

Nor should we fall for scare-mongering about parties in the Opposition: If their record with 'appeasement' or 'law and order' is nothing to write home about, then the BJP's is at least as bad.

In fact, anybody rational would argue that it is considerably more dangerous -- as clearly the current BJP leadership believes that the party's expansion across India, and thus their own survival at the top, depends on injecting communal tension into areas where it has so far been largely controlled.

The mechanism is straightforward: Incite or import young men to carry trishuls through a Muslim neighbourhood and shout provocative slogans; force a police response or one from local residents; then magnify that response, as an example of Hindu persecution, through the state's media and WhatsApp.

Given this strategy, I fear for Telangana and West Bengal in particular; these are the states where the BJP seeks to unseat parties with a strong sub-national identity, and where there is a large Muslim minority.

Though, of course, the BJP is even capable of making minority 'appeasement' into an issue in Odisha, where Muslims are only two per cent of the population.