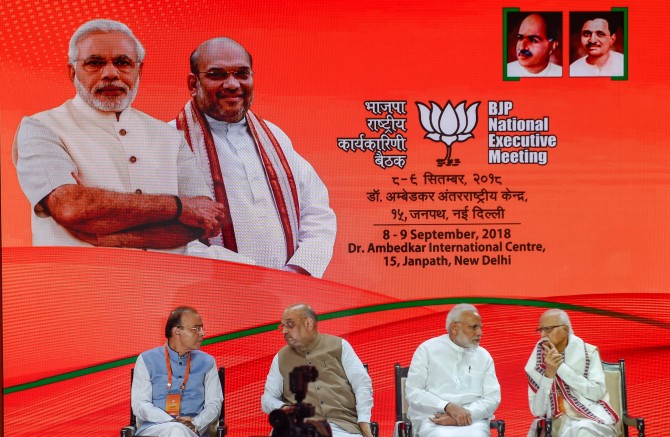 Narendra Damodardas Modi's rousing speech to the party faithful roused both leaders and cadres who will return to their bases with renewed confidence that the BJP will return to power in 2019 under the leadership of Modi and party president Amit Anilchandra Shah.

Great political hype has been generated for the Lok Sabha election, with the Opposition indicating that it is ready to join battle with a Bharat Bandh just a day after the BJP conclave ended.

Questions, of course, there are aplenty, for all parties and sides.

First, for the ruling party. Will the BJP get a full majority in 2019?

Will the Modi wave recede next year?

If the BJP ends up with sub-200, will Modi end up as Leader of the Opposition?

Or will the Rashtriya Swayamsevak Sangh offer the more acceptable Rajnath Singh or Nitin Gadkari as a compromise candidate to seek support from other parties?

Next, to the largest Opposition party that hopes to do better next time round. Will the Congress get a three-digit seat tally?

Does Rahul Gandhi have pan-India charisma to neutralise the Modi poll campaign blitz?

Is there a plan by the Congress where if it wins 125 or more seats, it will install a regional party head as prime minister and provide external support?

Finally, the Mahagatbandhan or the third front. Can 35 regional parties agree on a national agenda?

Do they have a tall enough leader to unite the divergent political ideologies?

Even as the three sides wrestle with these issues, the BJP has kickstarted its election campaign at its 10, Ashok Road national headquarters in New Delhi as has the Congress party at its 24, Akbar Road war rooms.

For both sides, the stakes are high, and work on strategy meetings, drafting of manifestos etc have started in earnest, most of them at hush-hush daily deliberations.

For Modi, the major challenges ahead are from within the BJP as well as from the 35 regional parties hankering after his post as well as National Democratic Alliance partners like the Shiv Sena and Akali Dal.

Modi himself feels the Congress party is a nuisance, but not a threat, as it is completely weakened.

Modi does not have an immediate opponent, either from within the BJP or the Opposition. But the fact remains that despite the analysts providing a hunky-dory picture for the future, there are enough elements providing a platform for the anti-Modi forces.

Despite the opposition, Modi stands tall because he has brought in a major transformation in the civil services and in the banking sector, via the spate of welfare schemes his government has initiated for the weaker sections of India society and through the direct connect he has established to the Indian people through his monthly Maan Ki Baat radio show.

Little wonder that pre-election surveys and sense of the nation opinion polls give Modi more than 50 per cent of the votes.

Under his confidant Amit Anilchandra Shah, Modi knows the BJP organisation is fully behind him.

In contrast, the Opposition presents a picture of disarray.

Congress President Rahul Gandhi cannot be expected to play the role his mother Sonia played as the coordinator for Opposition unity. No Opposition leader wants to be seen as yielding to Rahul. Some reports suggest that some senior Congress leaders do not accord Rahul the same respect they do to Sonia Gandhi.

As the sole national party in the Opposition grouping, it is essential that the Congress is seen to be leading the conglomeration in order to provide a unifying factor, but so far it is missing in action.

Rahul Gandhi is also not a political personality nor does he have a clear, sharp, focus on the next Lok Sabha election. The Congress does not have a strong organisation as it did even 10 years ago. It is a political outfit hobbled by a severe cash crunch.

Of the 35 regional parties itching for a Mahagatbandhan, it often seems like a group of rivals come together with just one purpose. Like Mayawati and Akhilesh Singh in Uttar Pradesh. Or H D Kumaraswamy and Siddaramaiah in Karnataka. Or Mamata Banerjee and the Marxists in Bengal.

Their prime object is to remove Modi from power and they realise there is no time to lose.

They know that if Modi is not removed in 2019, India's political spectrum will change completely, the Congress will die a natural death and there will be no stopping the BJP.

In conclusion, here's my reading for 2019. Most likely Modi will return to power, likely with fewer seats than he did in 2014.

In this scenario, the BJP will get 230 plus seats and the Congress, 75 plus.

The BJP will be the single largest party in the next Lok Sabha, the only party with a three digit tally.

Some of the BJP's surprise supporters could be the Biju Janata Dal, the Telangana Rashtriya Samithi, the T T V Dhinakaran faction of the AIADMK and Farooq Abdullah's National Conference. Not because any of these parties have developed a sudden affection for Modi or the BJP, but more to keep the Congress away.

Could the situation be flipped on its head? Could there be a Karnataka style of government formation at the Centre where the Congress supports a smaller regional party from the outside to keep the BJP out of power? Yes, that is also possible.

Even if that occurs, the BJP will not shed any tears as the lifespan of a Khichdi Sarkar is bound to be short.

As a senior BJP leader told me, "We saw such a government in 1996 and we know what happened two years later."

Yes, that means another Lok Sabha poll in 2021.