What if cheap, off-the-shelf drones were modified, armed and operationalised?

That could be the future of aerial warfare, as Beijing recently demonstrated.

What must India do now? Mathew Maavak's insight. 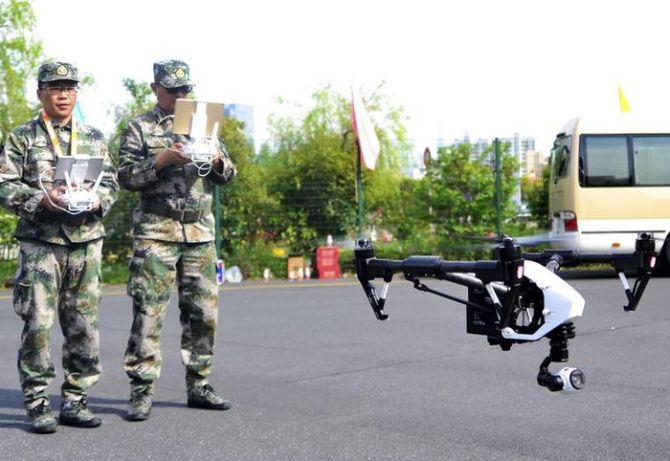 A pair of military members fly drones during a test in Shanghai, China.
China has stepped up research into military drones as its arms industry looks to increase export volumes, hoping to gain traction with cheaper technology and a willingness to sell to countries Western states are reluctant to.
Photograph: Reuters.

Imagine a swarm of rubber band-catapulted armed mini-drones flying in large formations over a battlefield?

Now, ponder the fact that each drone was modified, armed and operationalised from off-the-shelf models worth less than $200 each.

The future of aerial warfare has landed.

China recently demonstrated this possibility when state-owned China Electronics Technology Group Corporation launched a record-breaking 119 drones in mission formation. The breakthrough was not in the numbers per se; rather it was in 'swarm intelligence' -- the harmonic integration of multiple low-tech drones with smart sensors and artificial intelligence (AI).

Drones will be variously fitted with reconnaissance cameras, electronic jamming devices, missiles, warheads and even machine guns and sniper rifles.

A 'drone hive' within flying distance can store, launch and recharge these swarms with digital efficiency.

The US, Israel and China currently lead the world in military drone technology.

China's arsenal of 1,300 military drones is set to grow quantitatively and qualitatively over the next few years due to its global monopoly in commercial drone production. Companies like DJI, Zerotech and Ehang, among numerous others, mass produce hundreds of thousands of drones per annum, capturing 85 per cent of the global market in the process.

There are no contemporary countermeasures against swarms of disposable, 3D-printed drones.

Directed energy beams may be an option if such swarms are detectable by radar. Upon discovery, however, the swarm may be prompted to disperse and regroup in smaller numbers to neutralise enemy defences.

As a deterrent weapon, such swarms are theoretically unsurpassable in terms of cost, efficiency and in the ability to create a territorial cordon sanitaire with minimal risk of escalation.

Suicidal terrorists will be neutralised by miniature kamikaze drones. What more can a jawan ask for along the Line of Control in Kashmir? 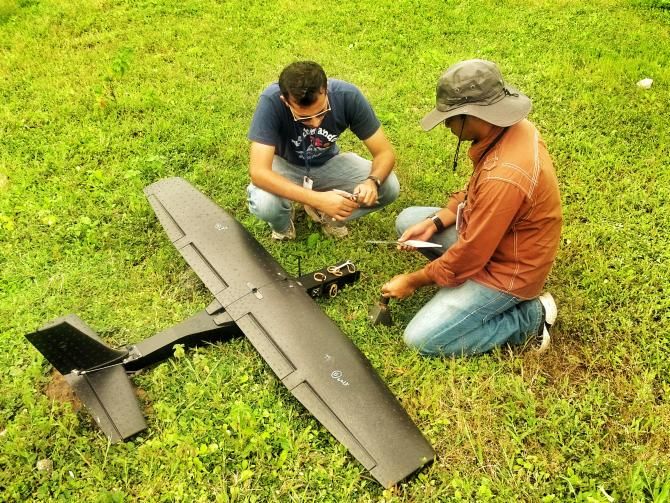 But where does India stand in this transformative Revolutions in Military Affairs (RMA)?

Although it is acquiring local and foreign drones for a variety of anticipated missions, the Israeli Searchers, Herons, Harpys and Harops remain the speartip of the Indian arsenal. However, these drones collectively cost hundreds of millions of dollars to the exchequer, necessitating a closer look into alternative drone paradigms that are more cost-effective and lethal.

Military drones will remain indispensable as they can replace the human pilot and remain operational for extended periods of time under a variety of terrains, altitudes and weather conditions.

The edge possessed by hi-tech military drones, however, will be blunted as soon as they fall into enemy hands. Iran had reportedly reverse-engineered a US RQ-170 Sentinel it captured in 2011, and subsequently used the knowledge gleaned to bring down two more US RQ-11s as well as a ScanEagle drone.

Most of the time, there is no need to use expensive military drones when specially outfitted commercial ones can do the job. Indian military planners should consider weaponising commercial drones as a pro-tem measure before swarms of Chinese aerial sentries are deployed over the Himalayan frontiers.

Local engineering institutions can be approached by the Indian military to develop complex algorithms-based swarm intelligence for a new generation of disposable drones. Here is where the technical knowledge of students and their youthful propensity for gaming form a perfect fit.

Using a similar logic, the United States Special Operations Command (SOCOM) will be hosting a ThunderDrone contest this month for drone buffs to simulate every possible battle scenario. Drone hobbyists and DIY buffs are driving the drone evolution in the US, reflecting a global bottom-up process, which India can co-opt for the latest ideas and innovation.

Emulating China's sprawling drone production complex is futile as the sector thrives on a symbiotic industrial ecosystem that churns out a host of smart devices for a variety of industries. This is a reason why smartphone manufacturer Xiaomi has emerged as an otherwise unlikely leader in drone production.

India not only needs a new drone strategy, it needs a new industrial model to create next-generation defence products and services.

Here is where the Make in India initiative, with its focus on the Industry 4.0 (i4.0) paradigm, can change the way local products are designed, manufactured and refurbished.

What India currently lacks in physical infrastructure can be compensated by its strengths in the software sector. A new generation of digital scientists will be needed to oversee the conveyor belts of India's future i4.0 smart factories.

Drones will be increasingly ubiquitous in sectors ranging from disaster relief to logistics to firefighting to journalism to farming, among others. This is a $100-billion global market by 2020 that India cannot afford to ignore.

It is no longer a laughable proposition to tinker with toy drones before colonising future skies. The Wright brothers, after all, had revolutionised flight -- and changed human trajectory forever -- after fiddling in their bicycle repair shop a century ago.

The writer is a doctoral researcher in risk foresight at Universiti Teknologi Malaysia.