When the Muslim Personal Law Board promises 'advisories' and nikahnamas to the Supreme Court, one has to remember not only its recent campaign against any change in Muslim personal law, but also its past record of inaction on the question of triple talaq, says Jyoti Punwani. 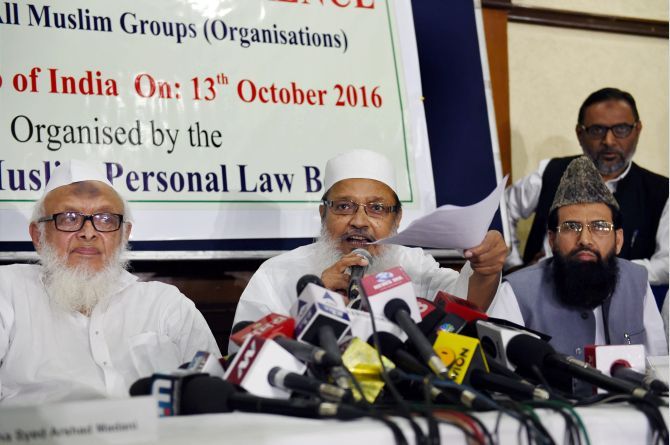 Suddenly, the All India Muslim Personal Law Board, which has been conducting a full-fledged campaign in support of triple talaq, the practice whereby a Muslim man can instantly and unilaterally divorce his wife, even without her knowledge, is flush with suggestions on curbing it.

Over the last few days, the board has made one promise after the other to the Supreme Court about the measures it proposes to take to do away with this 'undesirable' practice which, it insists, is part of Islam.

These promises include issuing advisories to qazis to dissuade would-be grooms against it, and to suggest to the couple that they incorporate a clause in the nikahnama that will make it impossible for the husband to pronounce unilateral instant divorce.

The board even said it would socially boycott those who pronounce it.

Why should we believe these promises?

For, they belie the board's frenzied campaign over the last eight months aimed at gathering support for triple talaq.

Alarmed by the Bharatiya Janata Party's enthusiasm for a Uniform Civil Code, the board has included triple talaq in its campaign to 'save the Shariat' -- the range of personal laws that govern Muslims in India from State interference.

It has been holding rallies across the country and conducted a signature campaign specially among Muslim women that says they want no change at all in their personal laws.

The board's promises to the Supreme Court also contradict the affidavit filed by it before the same court on the question of triple talaq last year.

The affidavit was filed in response to petitions by Muslim women asking for a ban on triple talaq, polygamy and nikah halala (the practice by which a divorced woman must marry and consummate her marriage to another man and then be divorced by him, before being able to re-marry her first husband).

The Supreme Court concluded its hearings on the issue last week.

In its affidavit, the AIMPLB lists reasons in support of triple talaq. One of them is the ease with which this practice enables men to 'get rid of' (the exact words used) their wives.

Denied this facility, says the affidavit, husbands could kill their wives in the dead of night with no one any the wiser.

As if this was not enough to reveal the board's attitude towards women and the institution of marriage, the affidavit also describes women as too emotional and hence incapable of taking reasoned decisions about divorce. Therefore, only men can exercise this right unilaterally.

Why then is the board now promising to curb a practice it has vociferously supported?

Obviously, it is nervous about unilateral instant triple talaq being declared unconstitutional by the Supreme Court.

Had it been genuinely concerned about the plight of wives thrown out of their homes with a single pronouncement of three words, it would have incorporated these latest suggestions in its original affidavit.

None of these suggestions are new. The debate on triple talaq has come up periodically in the last three decades, and always, the board has taken the same stand on it -- that a social reform campaign is the only answer.

The debate began with the Shah Bano judgment.

In 1985, an elderly Muslim divorcee from Indore was awarded her right to a monthly maintenance for life from her husband, as guaranteed to all deserted and divorced women under Section 125 of the Criminal Procedure Code.

Some remarks in the judgment angered the ulema (the clergy), who mounted a nation-wide street-level campaign to get the judgment revoked as 'unIslamic.'

When Shah Bano's house was stoned, the courageous woman finally gave in and declared she was repudiating the judgment because she didn't want riots.

The board then succeeded in getting then prime minister Rajiv Gandhi to enact a new law -- the Muslim Women Protection of Rights on Divorce Act, 1986. Its aim was to exclude Muslim divorcees from the purview of Section 125 of the CrPC.

Under the new law, a Muslim divorcee was only entitled to a lump sum payment from her husband within three months of divorce. After that, the woman's parents and relatives had to support her.

If they could not, Wakf Boards, which managed the community's collective property, were to look after her. The board promised that no Muslim divorcee would remain destitute.

Though no statistical survey was carried out, within a year of this new law being passed, Muslim lawyers told this reporter that the number of instant divorces had increased.

Earlier, Muslim husbands would just desert their wives. Now, the moment a deserted Muslim woman filed for maintenance under Section 125 of the CrPC, the husband pronounced talaq thrice, gave her a lump sum, and washed his hands of her.

The lawyers perturbed by the increase in such instant divorces were neither feminists nor backed by the Rashtriya Swayamsevak Sangh. They were members of mainstream Muslim society who supported the new law.

Yet, they felt having got the new law passed, it was the board's responsibility to use its authority to discourage the practice of triple talaq.

That was the beginning of many such attempts to persuade the board on this issue.

In 1993, the Ahle Hadees sect issued a fatwa that even a triple pronouncement of talaq should be treated as one pronouncement, to enable the couple to reunite. Muslim intellectuals across the country asked the board to accept this as the norm. The board refused.

Every time a judgment came invalidating triple talaq, the board only dug its heels in further.

But as Muslim women became more assertive about their rights, they devised their own solutions to triple talaq and polygamy, in the form of nikahnamas or marriage contracts, an accepted feature in Muslim marriages.

Groups of Muslim women and men, including lawyers, qazis, academics and activists, worked on nikahnamas which would stipulate that the husband would not unilaterally divorce his wife, and prescribe punishments in the form of substantial fines or attachment of his property if he did.

These proposed nikahnamas also gave the woman the right to divorce her husband. One such nikahnama, drafted by a group in Mumbai in 1994, was approved of by the Aligarh Fiqh Academy (comprising Islamic jurists).

However, the question arose: Who would implement this nikahnama?

Everyone turned to the AIMPLB as the one authority that could. But the board rejected the nikahnamas drawn up by Muslim groups.

If erring husbands had to be punished, who would hand down the punishment, it asked. Not the State, as that would mean State interference in Muslim Personal Law.

The board also felt that giving the wife an equal right to divorce was unacceptable and would pave the way for the breakdown of marriages, since women were ruled by emotion, not reason, and would use this right indiscriminately.

Finally, it said, it would not be easy to talk about things like triple talaq and punishments for the husband on the joyous occasion of marriage. Education on these issues would be better.

Interestingly, its qualms on this front seem to have now disappeared!

Finally, in 2005, under pressure from women, the board issued its own model nikahnama. This advised husbands not to resort to triple talaq, but prescribed no punishment for it. But after issuing this nikahnama, the board did nothing to publicise it.

So when the board now promises 'advisories' and nikahnamas, one has to remember not only its recent campaign against any change in personal law, but also its past record of inaction on the question of triple talaq.

Its second promise -- to impose a social boycott -- is also so much hot air.

Social boycott can only be imposed successfully within a close-knit community with a central authority.

It has worked effectively among the Dawoodi Bohras, who look up to the Syedna as their spiritual head.

The Syedna controls every aspect of their lives, and anyone who defies him, faces the prospect of being cut off not only from the community but also from their immediate family.

Many Dawoodi Bohras have had to live deprived of their wives and children, only for having disobeyed the Syedna.

The late Islamic scholar Asghar Ali Engineer, who led the reformist movement among Dawoodi Bohras, was the most famous victim of this social boycott.

Social boycott is also practised among small close-knit caste groups, specially in villages. Anyone who goes against community norms is made to atone or made an outcaste by the caste panchayat.

Shias in India do not practise triple talaq. Even among Sunnis, followers of the Ahle Hadees do not accept it. The remaining Sunnis are a vast disparate group divided into sects, with no one supreme leader.

Some have their own spiritual heads whose commands they follow, others don't. The board certainly has no authority to impose a social boycott on anyone.

Secondly, social boycott is in itself undemocratic. Social disapproval of a practice is one thing, but social boycott deprives an individual of her/his fundamental rights.

The board has had 30 years to induce social disapproval of the practice of triple talaq. It hasn't even tried to do so.

Can it be taken seriously when it talks of imposing a social boycott?

The question really is: Why is the board so scared of triple talaq being declared unconstitutional that it is making promises that go against its grain?

As the board itself admits, triple talaq is the most undesirable form of talaq. If it is banned, Islam definitely won't be harmed.

Who stands to lose if Muslim men lose their right to divorce their wives in a trice? And who gains?

The answers to these questions tell you all that you need to know about the Muslim Personal Law Board. 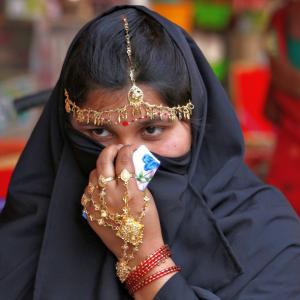