'The Babri Masjid wasn't just a mosque, it was a test of our secularism,' says Jyoti Punwani. 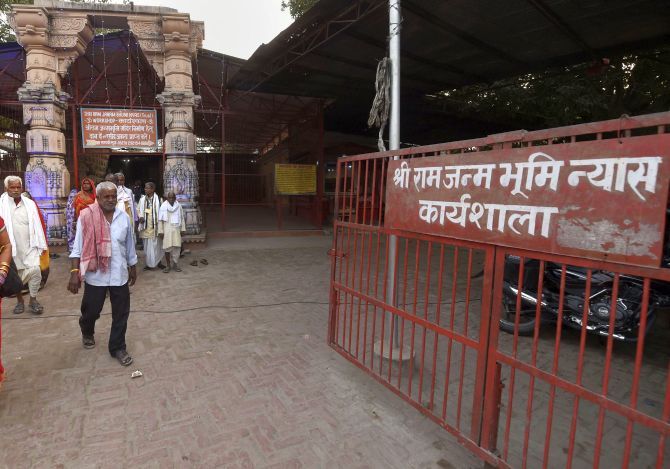 "The courts work slowly, but ultimately they will listen to you."

How often have I said these words to victims of the 1992-1993 riots in Mumbai, specially those who had suffered at the hands of the 31 policemen indicted by the Justice B N Srikrishna commission of inquiry into the riots.

The commission had recommended 'strong action' against the policemen for their extreme communal conduct.

After having been ignored or disbelieved, a sitting high court judge, seated in the majestic Bombay high court, had taken the victims's estimonies seriously enough to recommend punishment against their tormentors. This itself had revived the faith of these victims in a hostile system.

However, when it came to actually getting these policemen punished, they found themselves up against an unrelentingly communal State.

The 'secular' Congress-Nationalist Congress Party government, bureaucrats in the law and judiciary department all combined to make these Muslims'a fight for justice near impossible.

But the few cases that managed to reach the courts, thanks to the doggedness of the victims and their lawyers, did get justice.

Some court pronouncements were enough to dispel the weariness of years, for example, when Justice F I Rebello of the Bombay high court described the Hari Masjid case of January 1993 as 'a case that affects the very soul of India'.

This was his retort to the CBI counsel who informed the bench that this case, in which six unarmed namazis had been killed in firing inside and around a masjid, was too 'simple' to be taken up by the investigative agency.

It was worth seeing the expression on Farooq Mapkar's face when he heard the judge's words.

Mapkar, a bank peon, had waited 10 years for the government to act, and finally approached the high court for action against Sub Inspector Nikhil Kapse, indicted by the Justice B N Srikrishna commission for 'brutal and inhuman behaviour and unjustified firing'. Mapkar had himself been shot in the shoulder inside the Hari Masjid, south Mumbai, as he bent for namaz.

Then there was the order discharging the victims in the Suleman Usman Bakery case. 8 innocent Muslims were killed in a raid on the bakery led by then police commissioner Ram Dev Tyagi in January 1993.

The inmates of the bakery and the adjacent madarsa --- also in south Mumbai -- had been charged with attempt to murder and rioting. This was a bid to 'justify the deaths caused by the police', said the first information report against the policemen, charging them with the murder of 8 innocents.

Discharging these victims in 2011, Justice R P Sondurbaldota of the Bombay high court wrote: 'Nothing can be more frightening that when the protector becomes the predator.'

It is worth noting that no FIR against these 'predators' would have been filed had it not been for the Supreme Court.

Hearing a petition urging implementation of the Justice B N Srikrishna commission report, then Chief Justice A S Anand asked the Maharashtra government counsel what action had been taken against Ram Dev Tyagi for the Suleman Usman Bakery case.

It was after this query that the newly elected Congress-NCP government set up a special task force in 2000 to study the commission's report and act on it.

Almost two decades later, no cop has been convicted.

Mapkar is still fighting to challenge the CBI's exoneration of Nikhil Kapse. Ironically, the CBI had been told by the judges to investigate the Hari Masjid firing 'to restore the faith of all the sections of our society in the system'.

Tyagi, charged with murder, was discharged in 2003 by the trial court, and his discharge was upheld by the Supreme Court.

But seven of his co-accused policemen stand accused of murder.

The trial drags on.

Not one of these accused cops has spent even a minute in custody, thanks to the government's insistence that they remain free.

Despite all this, rarely have the courts completely let down the victims, though their judgments have often fallen short of expectations. They have proved to be the last bastion of secularism in  a system weighted against the minorities.

What does one tell the victims now, after the Supreme Court's Babri Masjid judgment?

When the familiar laments of 'there's no insaaf for Muslims' and 'sarkar bhi unki, police bhi unki, adalat bhi unki' are made, will one be able to contradict these with concrete precedents?

And if not, what's the alternative?

Actually, the victims have themselves often indirectly pointed out the alternative. Again and again I've asked riot victims of all ages and both faiths whether their experiences had turned them against the other community forever.

Only thrice have I been told 'Yes'.

A survivor of the Radhabai Chawl incident in Jogeshwari, north west Mumbai, whose parents were burnt alive; the mother whose newly married son was killed by Shiv Sainiks from his neighbourhood in Pratiksha Nagar; north east Mumbai, and the mother both of whose sons were killed -- burnt alive, she was told by eye-witnesses -- at Antop Hill, nortn central Mumbai.

These three victims of January 1993 could not bring themselves to renew their ties with the other community.

In the first two instances, their own neighbours had betrayed their trust.

In the Radhabai Chawl case, all the accused were acquitted by the Supreme Court, which passed severe strictures against the prosecution for randomly picking up Muslims, and also against the TADA court for convicting them without evidence.

Indeed, in the Radhabai Chawl case, the survivors had not even been called as prosecution witnesses.

But other riot victims have refused to turn against an entire community. Despite their own trauma, they have been able to make the vital distinction between rioters and the rioters's community.

How to explain this generous and rational way of thinking, given the lack of any significant organised effort by either community to help the other after the riots?

Sometimes, just Hindu lawyers fighting for Muslim victims free of charge has been enough. At other times, old friendships have withstood time and distance; or, employers have refused to distrust their employees only because the latter's co-religionists rioted.

Had both communities, specially Hindus (for the majority of the riot victims were Muslim), made a sustained, organised effort to reach out to the victims after the riots, and be there for them when they were vulnerable, would the courts have emerged as the only ray of hope?

Had justice for the riot victims become a Mumbai issue, would we be describing Saturday's Supreme Court judgment in such divisive terms? 'Muslims lost and Hindus won'

We have all lost. The Babri Masjid wasn't just a mosque, it was a test of our secularism.

Both assaults on places of worship of minorities, one by the State and the other with the State's connivance, shamed us, just as the Supreme Court judgment has.

Hindus comprise an overwhelming 80% of the population. Yet, we could not prevent our co-religionists from demolishing the Babri Masjid nor could we get justice for the victims of the violence that followed in Delhi 1984 and Mumbai 1992-1993.

Yet, one factor needs to be pointed out.

Not all Muslim activists are as engulfed by gloom by the Supreme Court judgment as are Hindu secularists.

Apart from the relief that this divisive issue has ended; apart from the damning knowledge that a judgment against the Hindu claim might have resulted in many more deaths, lies a genuine belief that an old mosque was never worth it.

Many Muslims have been saying for some time: We should have given up the Babri Masjid right at the start.

It is not 'sarkari Muslims' who are saying this. Nor is this being said as an acknowledgement that Muslims have no chance of fighting a Hindu State.

Professor Juzer Bandukwala of the People's Union of Civil Liberties, whose house in Baroda was attacked in the 2002 riots, and who runs a scholarship scheme for poor Muslims; and Javed Anand of Muslims for Secular Democracy, are just two of the many intellectuals who had advocated giving up the mosque even during the Ayodhya campaign.

They were shouted down at that time by Hindu secularists as much as by their own community.

But the people saying this now are those who plunged into working for their community after the demolition, and found there's a world to be changed in which an old mosque in Ayodhya matters little.

Javed Shaikh, who had worked in Jogeshwari for the riot victims and also for the Radhabai Chawl accused, and now lives in Muslim-dominated Mumbra, sent me this message after I expressed my sadness to him at the judgment: 'Mandirs/masjids are made of stones and Bhagwan/Allah doesn't live there.'

Is this only a salvaging of hurt sentiments, or more than that?

Another glimmer of hope came from the joyous celebrations of Eid e Milad across Mumbai on Sunday. The Supreme Court judgment seemed aeons away as young men crowded the roads dressed in their best.

This is the centenary year of the procession and of the Khilafat movement. The 1919 procession had been organised by the Ali brothers, and led by Mahatma Gandhi from Khilafat House.

This year, the chief guest was Swami Agnivesh, not only a religious Hindu, but one who has been targeted repeatedly by Hindutvavadis.

Can we still say that one Supreme Court judgment is enough to wipe away our belief in secularism?