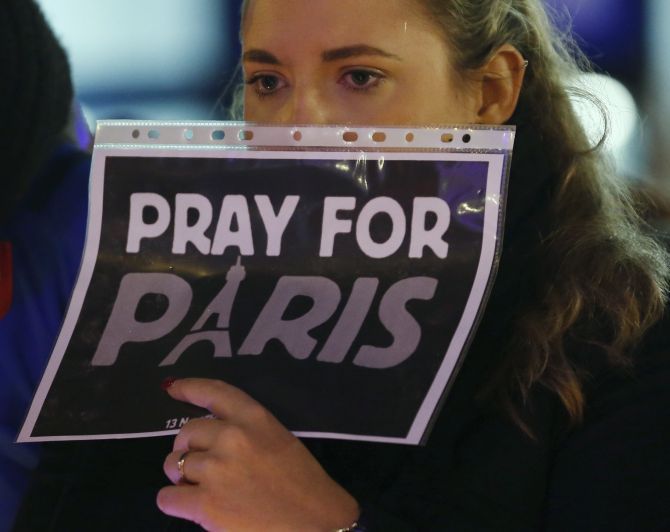 'Disgruntled, disillusioned, Muslim youth -- of whom there is no dearth, given the Muslim world's sorry state -- are ready to take on the might of the West and attack it in any way they can.'

'For them, it is their faith, and not the reasoning of Newton or Descartes that has stayed with them, sustaining them through the misery their world had sunk into,' says Syed Firdaus Ashraf.

A friend sent me the link to an article, An open letter to moderate Muslims (external link) in which the author, Ali Rizvi, talks about how moderate Islam has lost out to extremist Islam.

Since reading it in the wake of the Paris terror attacks, I have been wondering why the jihadists carry on their senseless killings, and why they do not see the primacy of reason and rationality which the rest of the world believes in.

I chanced upon the answer in The 100 Most Influential Persons in History by Michael H Hart.

It is no easy task to nail down the most influential persons in history. Who do you include, who do you leave out? And on what basis?

Hart, however, does the job ably, ranking Prophet Mohammed as the most influential person in the history of mankind for having changed the face of the world with his new faith and belief, Islam.

The second person, according to Hart, was Isaac Newton who changed the world with his scientific temper and scientific knowledge.

Jesus Christ ranks third, only because Hart believes he was still fairly young when he died. Hart also credits St Paul for the spread of Christianity more than Jesus Christ.

So, of the top three most influential people in the world, two positions are taken by men who propagated faith. Or, to look at it differently, faith scores over reasoning (as represented by Sir Isaac).

If you read the history of Christian-Muslim wars, the last time any Muslim army threatened Europe was in 1683 at the Battle of Vienna. Muslim Turks under the Ottoman army arrived at the gates of Vienna, where they were roundly defeated.

This was at a time when Muslim armies ruled lands from the tip of the African Atlantic Oceam to the Indian Ocean.

The Muslim defeat in Vienna brought great relief to Christendom. Lord Kinross in his book The Ottoman Centuries: The Rise and Fall of the Turkish Empire writes, 'Christendom greeted the news of the relief of the imperial city with rapture. Here at long last must be the death knell of Moslem aggression, silencing forever the alarm of the Turk bells in Europe.'

After the loss in Vienna, the Muslim world regressed into backwardness while the Christian world mostly adopted the scientific temperament of Newton and his scientific progeny.

Credit for this must go to Rene Descartes who suggested that man should start not with faith, but with doubt. This was the reverse of the attitude of St Augustine and most medieval theologians, who held that faith must come first.

'Descartes,' Hart writes, 'decided that in order to reach the truth, he must make a fresh start. He therefore begins by doubting everything -- everything his teachers had told him, all of his most cherished beliefs, all his common sense ideas and even the existence of the external world. In short, I think, therefore I am.'

Doubts thus became legitimate, even de rigueur, in Christian Europe where they started infusing every aspect of life with doubt, be it biology, chemistry, physics or engineering. Even faith, religion, theology, even the 'fact' of 'god' was not beyond question, dissection and rejection.

It was here that Muslim societies failed miserably, as there was no one who doubted or was willing to doubt their faith or bring in a scientific temperament.

For believers of Islam, there was nothing to doubt because the words of the Prophet were final and the Quran was beyond question. Ibn Rushd (Averroes) tried to question Islamic dogma in the 12th century, but his works were rejected outright and he himself was banished by the then caliph.

When Newton was experimenting with science in England, Mughal Emperor Aurangzeb was spreading his religion in India through violent means.

Just 200 years after Aurangzeb's death, the advancement of European technology and British imperial shocked Muslim rulers across the world.

Akbar Allahabadi, the famous Urdu poet, wrote this in the 19th century:

The 'machines' brought relief from drudgery and led to the eventual supremacy of European powers in the battlefield. All that the Muslim world was left with was their faith, and their tattered dream to be a major power once again.

The final blow to the Muslim world was dealt 100 years ago when the Ottoman Turks lost the First World War and under the secret Sykes-Picot agreement England and France quietly distributed the Ottoman Muslim lands between themselves.

Worse, in 1917, under the Balfour Declaration, the European powers decided to give the go-ahead for the formation of a new country for Jews in what was Palestine, thus humiliating the Arabs even more.

Almost overnight, the entire Ottoman Muslim Arab lands were carved into various countries like Iraq and Syria, with European powers in charge of their selfish interests there.

Later, as the West drew their oil from Arab lands, Muslim lands were marred either by civil war or by dictatorships supported by the West.

Whenever the Western powers were unhappy with 'secular' leaders of Islam like Saddam Hussein or Muammar Gaddafi, they sent in armies to topple their regimes, never bothering about the consequences.

Muslims in Arab lands knew the age of Islam's caliphs was long over. What kept them going was their faith. Immutable, and beyond question.

It is through this unalterable faith that Daesh captured the imagination of Muslim youth across the world.

Daesh chief Abu Bakr Al Baghdadi is believed to have stated in July 2014 that his army would not stop until it drove the last nail into the 'coffin of the Sykes-Picot conspiracy.'

No wonder that disgruntled, disillusioned, Muslim youth -- of whom there is no dearth, given the Muslim world's sorry state -- are ready to take on the might of the West and attack it in any way they can.

For them, it is their faith, and not the reasoning of Newton or Descartes that has stayed with them, sustaining them through the misery their world had sunk into.

As time passes, more and more Muslim youth are being misguided by their faith and are not willing to give reason a chance. Because of this, Paris-like terror attacks are bound to happen -- until reason replaces faith in jihadi minds.

IMAGE: A woman holds a sign during a ceremony in solidarity with the victims the day after the deadly attacks in Paris. Photograph: Denis Balibouse/Reuters 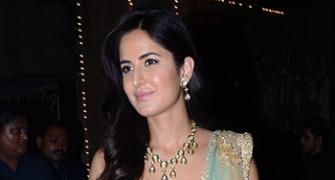 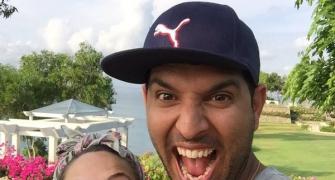 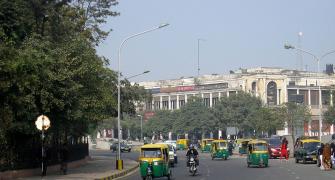