It is time we support Dipa Karmakar and not forget her by the time Tokyo Olympics roll in, the way we’ve forgotten so many others -- medal winners who have died in penury, who have had to sell their medals to survive, who have taken auto-rickshaws home from the airport.

It is time that talent, and not money, decided who gets to be nominated into the International Olympic Committee, says Damyanti Biswas. 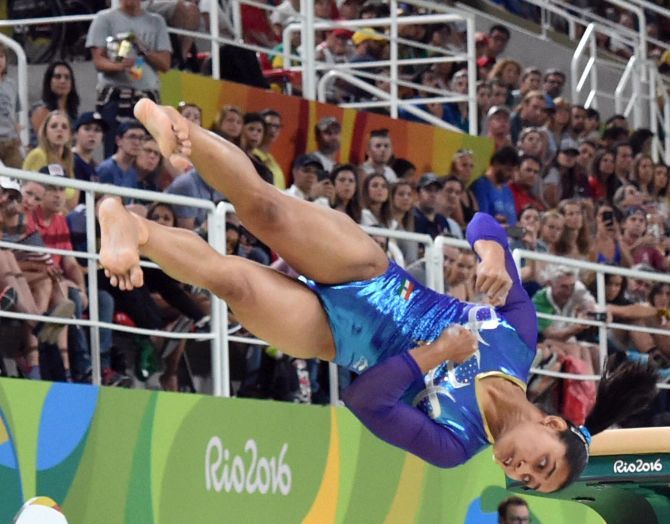 Image: Dipa Karmakar participates in the vault during the artistic gymnastics women’s final at the 2016 Summer Olympics at Rio de Janeiro in Brazil on Sunday. Photograph: Atul Yadav/PTI Photo.

As a child, I thought names like Produnova belonged to the Russians, as did gymnastics.

Dipa Karmakar from Tripura, India, changed that over the weekend, by performing a technically better Produnova vault than the woman who created it.

All gymnastic vaults appear risky, but this is a handspring double front vault of which Simone Biles, arguably one of the best woman gymnasts of our times, said: “I’m not trying to die."

Dipa has practised this vault about a thousand times in the last three months in order to make it the centre-piece of her performance. For anyone who knows a little about gymnastics, or has read a few articles on Dipa, the reason is clear: the infrastructure, equipment, and training available does not allow the pursuit of perfection in less risky, but highly skilled moves. The Produnova yields more points due to its difficulty level. It has a 7.0 D-score, for the hardest vault performed in women's artistic gymnastics.

In India, a basic foam pit is available only in the bigger city gyms, and not small towns. Dipa started off on bamboos and rubber mats. Her coach throughout has been Bisweshwar Nandi, a former national champion, but neither he nor Dipa had the advantage of the infrastructure and training taken for granted by gymnasts in other medal-winning countries. Until recently, Dipa trained on makeshift equipment, and even during the build-up to the Olympics, did not have the advantage of good bio mechanic experts and psychologists.

Despite all of this, Dipa placed fourth. While this seems like the bane of the Indian contingent, it is an achievement that deserves a medal in itself: a woman from a small town, with no government support and very little funding, managed to compete with the world's best.

It was good to see her trend on Indian Twitter on Independence day. The serious meditative face as she prepared for her run, the graceful flying leaps and vaults, the slight stumble, the proud posture at the end. My heart was in my mouth through it all.

I cheered for her, because let’s face it: here’s a 23-year old woman who risked her life for glory and for her nation. Who wouldn't praise such courage and endurance against the odds?

But a part of me wept too, because if history repeats itself, she would soon be forgotten.

Her father said she would target gold in the Tokyo Olympics, but will the government support her bid with hundreds of thousands of US dollars to give her the best chance at success?

Would a private company sponsor her journey? Beyond the cheering and the patriotic jingoism after an Olympic performance on the 15th of August, would we do anything other than forget her and go crazy over the T20 league matches?

India has a long history of Olympian almost-winners. Milkha Singh. P T Usha. I remember my father’s words: don't be a P T Usha. P T Usha also ran. Be a winner, a medallist, not an also-ran. Every time I placed lower than third in my class at school, I would hear the also ran refrain.

That relentless push towards academic achievement made me go the other way. I picked the arts, not science. I worked a stint in the fashion industry. I settled as a writer after my marriage, and that's who I am today. In the race of life, I’m an also-ran. While my journey is nowhere as painful or spectacular as Dipa's, many Indian women of her generation and mine can identify with it.

Dipa's coach said, "At the outset, I didn't think she had talent. But she had a sort of anger, a courage, which drove her to achievements. She asked to be taught, she wanted to do better."

The likes of Dipa and I got fortunate in having parents who treated us just as they would treat a son, who let us fly, who pushed us to do better.

Like in many other countries, India has a record of disrespect for women. Rapes, molestations, dowry deaths. Each time a woman is raped, the populace asks for the death penalty. I'm not here to debate that -- it might prove an effective deterrent, or not.

But I know what would gain women respect, and shut the faces of much of the misogynist, patriarchal male population of India, bring them into the 21st century, at par with the minority of modern, sane, feminist Indian men.

Today, I noticed some of the same men on Twitter who usually spout horrible misogyny tweet how ‘proud’ they were of Dipa Karmakar.

The best way out of darkness is light, and women like Dipa, whose name itself means ‘radiant’, or ‘lighted’, is what our country needs to produce more of.

We need protection and stricter laws to protect Indian women, but we also need women role models in sports: because on the midnight of India’s 70th Independence day, this 23-year old from Tripura united India, and made everyone cheer for her.

Men who usually look down on upon and heckle women, Indians who discriminate against citizens from the North-east, politicians, businesspeople, actors: everyone wanted her to win, and was proud she made it that far.

I think it is time we support Dipa Karmakar and not forget her by the time Tokyo Olympics roll in, the way we’ve forgotten so many others -- medal winners who have died in penury, who have had to sell their medals to survive, who have taken auto-rickshaws home from the airport.

It is time that talent, and not money, decided who gets to be nominated into the International Olympic Committee.

If Dipa Karmakar is to bring the country glory in the Tokyo Olympics, it must stand behind her, and not piggyback on her lonely fight to the top.

While we need to support all athletes, male as well as female, encouraging sports at all levels might especially benefit the perceived weaker gender. It will change mindsets, and help reduce crimes against women.

As I watch Dipa’s performance replay for the dozenth time, I want to call up my father and tell him that an also-ran can be a winner in so many ways. And to thank him for his valiant efforts at raising his daughter, in a country that does not seem to appreciate its women.

Damyanti Biswas is an author and blogger who writes about real and imaginary people with equal conviction.