Though EPS has sworn peace for now, or so it seems, his camp is said to be considering the possibility of calling an early meeting of the party’s general council, to get a mandate in his favour before things went out of control. Ground-level indications are that OPS had lost his limited base, which alone had forced him to patch up with the other, reportedly at the instance of the BJP ally at the Centre, says N Sathiya Moorthy. 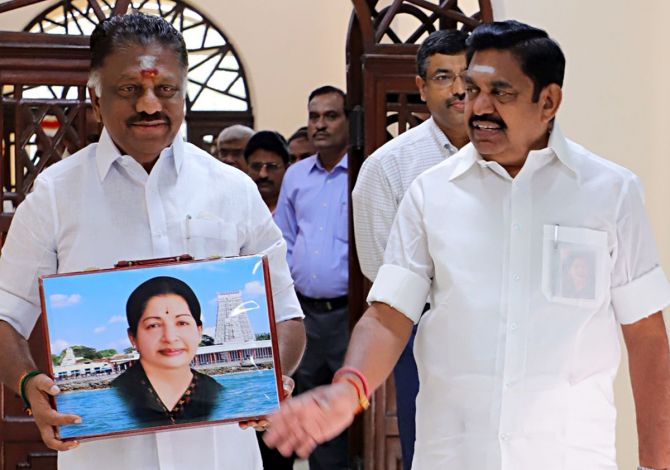 At a time when All India Anna Dravida Munnetra Kazhagam cadres were expecting the party’s Big Two to take time off from Covid management to strategise together, first for the return of common enemy V K Sasikala Natarajan from a Bengaluru prison early next year, and then for the state assembly polls due by May, Tamil Nadu’s Chief Minister Edappadi K Palaniswami (EPS) and his forgotten predecessor, O Panneerselvam (OPS), now deputy CM, are at each other’s throats, albeit through proxies.

What’s more, party men today are blaming it on the ‘mischief’ played by state leaders of the Bharatiya Janata Party ally ruling the Centre, with or without cues from their national bosses.

What will be remembered even more than the issues on hand, the AIADMK’s internal strains came out in the open on Independence Day, and kept a bunch of second-line party leaders running between the houses of their leaders, in the same Greenways Road locality in capital Chennai, where most ministerial residences are located. Thankfully, by evening they had managed to hammer out an interim solution, with the two leaders issuing a joint statement, asking others not to discuss internal party affairs in public.

Trouble began brewing a fortnight or so earlier, when some ministers, talking to newsmen in their respective districts, began responding to queries on the chief minister’s choice if and when the party won the assembly polls. One said that the party MLAs would choose the CM post-poll, while another asserted that EPS would be their chief minister candidate.

Curious media-persons started quizzing other ministers, too, and the cacophony ended only after senior minister D Jayakumar unilaterally declared that appropriate people would take appropriate decisions at the appropriate hour.

If someone thought it was all an unfelt storm in a non-existing tea cup, it all returned on Independence Day, when in the morning, walls in OPS’s native Theni district carried posters declaring him as the ‘future CM’. They were removed instantly, reportedly at OPS’s instance lest it should send out wrong signals.

Upset by the turn of events, and possibly at the instance of EPS, senior ministers led by Jayakumar held confabulations among themselves and began running between the residences of the top two. Though no end could be proclaimed, they managed to wriggle out a joint statement by the two -- OPS is the party coordinator and EPS, joint coordinator -- that no one should discuss inter-party matters in public.

At his meeting with senior ministers, OPS reportedly asked them why they were silent when another minister, R J Rajendra Balaji, earlier declared that EPS was their CM candidate. OPS had a point as he as the party coordinator should have been the one to declare such a decision, which however had to be taken by party’s presidium or at times the general council.

There is no denying that despite the complete rout in last year’s Lok Sabha polls under his stewardship, EPS has consolidated his hold over the party. Aping his mentor, the late chief minister Jayalalithaa’s style of functioning -- the only style he has known -- EPS’s chief ministerial statements for a long time now has been in first-person singular.

“I have directed the officials….” has been his common refrain, read and heard frequently what with Covid-19 pandemic calling the common man’s attention to news channels and newspapers day in and day out. This has irked not only the OPS camp, but also others in the party that EPS could make such claims only after proving his mass appeal through massive electoral victories one after the other, as Jayalalithaa and before her, party founder MGR, did.

Independent of all this, OPS’s camp followers, especially second-line leaders, have been deserting him, after EPS reportedly side-lined and/or insulted their leader, either in party affairs or governmental decisions, or both. Some OPS camp followers are seen as crossing over to the EPS side through the past months, or at least are seen playing the ‘cat on the wall’ game.

Party cadres are divided as to who could make a mark as chief ministerial candidate next year. Some point to EPS’s leadership drawing a huge blank in the LS poll last year. Others recall how in the lonely Theni Lok Sabha seat won for the party by OPS’s son Ravenndranath Kumar, AIADMK nominees lost the simultaneously-held assembly by-elections for two seats. They see ‘a conspiracy, a deal’, and wanted it probed before they proceed to decide on the chief minister candidate.

Though EPS has sworn peace for now, or so it seems, his camp is said to be considering the possibility of calling an early meeting of the party’s general council, to get a mandate in his favour before things went out of control. Ground-level indications are that OPS had lost his limited base, which alone had forced him to patch up with the other, reportedly at the instance of the BJP ally at the Centre.

Any rebellion under the circumstances, on the lines of the non-starter of a ‘dharma yudh’ that he launched on the advice of RSS ideologue S Gurumurthy, may backfire at present. Yet, there are those who want to speculate that OPS could consider splitting the party all over again. Some in the EPS camp also want the cadres to live with that possibility in their mind, as it could only weaken OPS even more.

Interestingly, the state BJP is said to be at the centre of the current controversy within the AIADMK. As they point out, talk of a chief ministerial nominee came up only after state BJP vice president V P Duraiswamy, until recently with the DMK, claimed that the party would lead the anti-DMK alliance in the assembly polls, and the fight was only between the two of them.

Naturally, cadres and leaders alike in the larger AIADMK partner felt offended. One issue led to another, and you had newsmen probing AIADMK ministers about the future of the existing alliance, new partners, if any, and seat-sharing formula. The question of chief ministerial candidate became a part of it all.

Even seat-sharing became an issue after the BJP’s Murugan and Duraiswamy began declaring that the party would send a large number of MLAs, will form a part of the government in the state, and will insist on ministerial berths.

Though Murugan as state party chief pooh-poohed his recent-find Duraiswamy’s suggestion on the BJP leading the victorious electoral alliance initially, in subsequent media interviews, he has ‘clarified’ that the AIADMK still led the combine now, but ‘it could change before the elections’.

It is a as good as putting the AIADMK on notice, to grant more seats than the BJP’s proven 2-3 per cent vote-share in assembly polls justified. Either give us the number and choice of seats that they wanted -- speculation goes all the way up to 50 seats – or else we will take away other existing allies and form a Third Front.

It remains to be seen if the AIADMK would yield if ‘arm-twisted’ thus, or in true MGR/Jaya style’s once they had gained confidence, the party asks the ‘national ally’ to walk up the garden path -- and alone.

The BJP’s strategists seem to be thinking big -- by whipping up pro-Hindu sentiments, by continuing to target Periyar  E V Ramaswamy and DMK veteran, late M Karunanidhi on social media, especially on issues of god, religion and Brahmins, they hope to at least replace the DMK from the number two place in the assembly -- on the assumption that the AIADMK would return to power in their company.

In this context, some BJP leaders cite the example of the Congress rival in the 1991 polls, held in the aftermath of the Rajiv Gandhi assassination, and the 2011 polls, in which actor-politician Vijayakanth’s DMDK came second as an AIADMK ally, pushing the ruling DMK to the third place.

Others are sceptical. They point out how despite Jayalalithaa’s miscalculation, especially 1991, the DMK got revived almost effortlessly. Throughout MGR’s reign of glory (1977-87), the Congress tried out such a strategy but when MGR died, the state voted the DMK back to power, pushing the Congress aspirant to the third place.

Likewise, five years after 2011, the DMK-led alliance won the highest number of seats for the Opposition, 99, in the 2016 assembly polls. The ruling AIADMK’s victory margin too came to an all-time record low of one per cent vote-share (41-40). The DMDK was nowhere to be seen, they recall, pointing out how state politics cannot be dictated and decided upon from ‘distant’ Delhi, then or now.

Whatever that may be, with its short and medium-term strategies in mind, the BJP has begun poaching from the DMK in particular. After Duraiswamy, they got a prized catch in Ku Ka Selvam, MLA from Thousand Lights constituency in Chennai, once held by party boss M K Stalin.

Speculation is rife that the BJP is targeting a few other DMK front-liners, including former Union ministers and/or present-day MPs and MLAs, among others.

While it could embarrass the DMK no end ahead of the polls, there are those who argue that given the Dravidian political structure, such exits could open up new and blocked avenues for those below them in the party hierarchy. “That is how the two Dravidian majors function, and remain relevant and successful, still.”

For its part, the DMK too has begun admitting BJP second and third-line leaders into the party -- and is said to be negotiating with some prized catch. However, the DMK may face problems, as some of the second-line BJP leaders may try to upstage long-standing DMK local leadership, thus affecting domestic equilibrium during the run-up to the polls.

There are also reports that in their eagerness to show up new faces to the media every day, some state BJP leaders are inducting whom they described as ‘reformed rowdies’ who want to merge in the ‘national mainstream’.

But party sympathisers beg to differ. They claim that by recruiting DMK and possibly AIADMK leaders later, and ‘rowdy elements’ too, the state BJP is sending out the exact opposite of the message that they presume the ‘Modi imagery’ has sent out over the past six years – but even then without much response.