'Other countries go out on a limb to save even a single life. What to talk of civilian accidents and disasters, even our military does not have a priority for Combat Search and Rescue...'
'It is an irony that the very same country that launches satellites for the Americans had to rely on American satellites to pick up possible signals from the AN 32's rescue beacon.'
'Why is this not a priority for our nation?' says Group Captain Group Captain P I Muralidharan (retd). 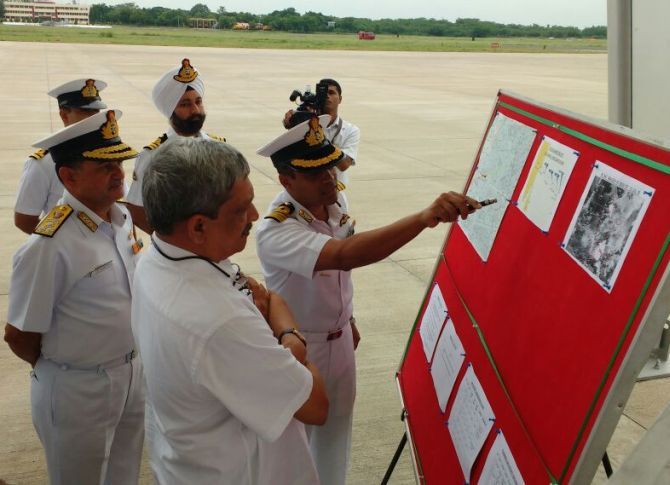 The IAF has lost aircraft and aircrew in large numbers earlier in the annals of Indian aviation history, sometimes in the hills with very delayed recovery of crash debris and mortal remains -- in one event, this materialising after several years.

Nevertheless, the anguish and heart wrench of the past week, caused by the ongoing reportage of the missing IAF AN 32 ought to make all professional fliers and policy makers rethink our nation's priorities in the vital ambit of Air, Land and Sea Rescue (SAR for short).

Surely, we do not need sagas such as that of the Malaysian MH 370, the Air France jet earlier in the Atlantic or this recent unfortunate IAF mishap to make us sit up. It is well known that our country does not have a dedicated SAR agency, much less dedicated Air Rescue Squadrons a la the US Air Force.

They have over fifty of them, one approximately for each of the 50 states. That now is something to speak for specialised air missions alright. One must admit that overall the SAR efforts of single service agencies have been comparatively more successful than others involving wholly civilian or other mixed air assets.

And to think that we now have a dedicated National Disaster Management Agency, but clearly oriented towards natural and man-made disasters and without any SAR mandate as such.

The funding required to provide the latest available technologies and equipment to the concerned single service agencies need to be provisioned, to address a key aspect directly linked to national and military morale. This applies not only in peace, but in war too.

Our Combat Search and Rescue capability needs buttressing too, so that we do not land up in situations of unrecovered Prisoners of War as indeed did happen in our 1965 and 1971 wars.

A holistic approach to SAR is called for marshaling resources available with the three services, the Coast Guard, the DRDO, our Intelligence agencies such as the NTRO and perhaps even private industry, to facilitate a timely and apt response to any kind of mishap involving our fighting assets, civil aircraft and other citizenry who become victims of natural and other calamities across the nation's air, land and sea frontiers.

The first responder in any contingency as articulated here in is normally the air element, from the IAF, Army Aviation or the Indian Navy. Perhaps on account of the flexibility that the medium affords, in terms of mobilising quickly.

The quantum of air effort required for SAR is dictated by the immensity of the disaster such as numbers of personnel involved, expected area of search and, of course, the terrain wherein the event occurred.

For a localised accident such as a fighter crash, the effort involved is normally focused in the area and numbers of casualties.

Also the prevailing SAR apparatus at various IAF stations is geared up to cope with it, given the specificities in aerial/ ground witnesses, radar assistance/air traffic control assistance which are normally available and the consequent triangulation of the accident site.

Should the area of incident/accident be vast or under water or even immersed in thick foliage as normally obtains in the eastern sector, the assets required would be of a different order.

Now after a week's search above water in the Bay of Bengal, we are reportedly having to switch our search domain to under water. Too late in the day perhaps, one could argue.

Some worthy erstwhile colleagues have been articulating on social media about the likely causes of this particular AN 32 disaster. Given the reported prevailing monsoon weather conditions, they feel it could well have been the result of rapid inflight icing over the wings or engines, leading to an uncontrolled left hand 'graveyard spiral.' This whilst the pilot apparently wished to skirt weather to the right.

Such inputs and quick analysis by concerned operations staff or from data that would invariably be available with the flight safety organisation concerned, which would help us focus on a realistic mode for the search. Doubts crop up when the weather is suspect or a factor preventing meaningful search operations post the accident. But an intelligent appreciation of the most probable causative factor would help in arriving at the optimal search zones.

Thus, any planned search pattern over water would normally start with initial scans over the skies immediately on the surface of that water body, be it the sea, a lake or a river from aerial platforms.

When it becomes evident that there is nothing to look for above the sea or river or lake, that is when the real challenges emerge in terms of underwater sensors such as sonars and bathyspheres.

Depending on the expected area of search several numbers of these assets coupled with diver assets would be called for. A watery grave is not something any soldier or citizen deserves.

The nation has the moral responsibility to bring those bodies home for a decent cremation or burial at the earliest. The goodwill generated thence would help hugely in bringing a sense of closure to the kin of the unfortunate victims.

Soon India is expected to have on its inventory large amphibious aircraft, to be acquired from Japan ,which could possibly be utilised to deploy specialists and divers rapidly to the expected disaster site, especially into large water bodies where suitable float-fitted SAR helicopters are not available.

Intelligent use of other unique assets such as Aerostats, AWACS and C 130Js need to be done.

Search and rescue over remote, inaccessible areas in mountainous or forested areas would pose their own peculiar challenges. Not only would mountaineering teams be required, communication gear, associated GPS devices and dog squads would be needed.

They would need to work in tandem with aerial platforms and paramedic teams. Noise augmentation devices and other acoustic sensors would be required perhaps.

One of our veteran Air Marshals tells his story of eons ago when after an ejection from a fighter in the Tezpur sector, he could not be picked up for several days, hidden as he was in the thick foliage.

It is not far fetched to think of miniature drones as a standard fit in our survival packs. The agility and ease of maneuvering of these gadgets has to be seen to be believed. Of course, they would need GPS cueing or some other pre-programmed navigational software.

But now we are in the era of drones and satellite technology and nothing ought to stay unknown, or un-pinged for any length of time.

It is an irony that the very same country that launches satellites for the Americans had to rely on American satellites to pick up possible signals from the AN 32's rescue beacon. Why is this not a priority for our nation?

Surely we could plan for our own geostationary sensors to pick up distress signals from any of our aircraft, ships or even mountaineers for that matter.

One understands there are issues of masking of satellites etc, but emphasis on fail safe pinging on multiple sensors of the international distress frequencies such as 121.5 MHz or 243.0 MHz.

Further, it is believed that satellite monitoring on both these frequencies have been discontinued of late and the US Coast Guard only monitors digital 406 MHz as of February 1, 2009.

Are international agencies and India on the same 'frequency'? India has already sent up two indigenous GPS satellites. Shouldn't we be prioritising to have our own satellite tracking capability over the subcontinent and adjoining sea boards?

Despite any amount of infrastructural design, we are still bound to have situations wherein aircraft especially vanish into thin air, indicating the tremendously uncertain realms of aviation in general.

Stories from the 'Bermuda Triangle' era abound and examples such as that of the Malaysian MH 370 stand out. India needs to have tie ups with neighbouring countries like Bangladesh, Myanmar, Sri Lanka, the Maldives to monitor distress frequencies from ground stations.

Likewise, suitable civil and military installations on the Eastern and Western seaboard need to have the capability to monitor and record these frequencies.

As a nation we unfortunately do not value lives. Other countries go out on a limb to save even a single life.

What to talk of civilian accidents and disasters, even our military does not have a priority for Combat Search and Rescue, CSAR. Proper attack helicopters, FGA aircraft and trained special forces need to be at hand to undertake effective CSAR. The same assets could be deployed in peacetime for anti-terror, anti-smuggling or counter insurgency situations.

Such a training regimen ensures the optimal serviceability of all rescue equipment such as life jackets, dinghies, SARBE beacons, associated batteries and the works.

The Indian Air Force earlier on had a problem because our aircraft fleet were disparate, divided between Russian and limited Western gear. Now we have almost even numbers of both types of technologies and it is that much easier to standardise rescue gear such as personal rescue beacons, their power packs, radio frequencies and the like.

Any lackadaisical or delayed reaction by the system to activate effective SAR measures is tantamount to an anti-national disservice.

One stands to lose not only the well known high morale of our fighting units, but also hazard generating ill will amongst citizens at large through the hurt and anguish caused to the near and dear ones from prolonged unresolved accidents and incidents.

Contrariwise, a timely rescue effort generates out of proportion goodwill. Apex bodies such as the National Security Council or the Cabinet Committee on Security would have to coordinate the national effort for SAR depending on the nature of the disaster, whether military or civil assets and personnel are involved and the terrain/ sector of occurrence.

Single service agencies normally cut in their actions much ahead of others. But then some capabilities, such as deep sea search for example in the current disaster, may be beyond the capabilities of indigenous elements and extraneous assistance may have to be sought.

Suitable Memoranda of Understanding with other nations and international agencies would pay dividends when the disaster actually strikes. Besides our nation's overall SAR architecture needs to be rehashed to make available the most timely and effective response to all sectors.

IMAGE: Defence Minister Manohar Parrikar being briefed on the search and rescue operations in Chennai.