Sheela Bhatt's questionnaire for all those boys, teenagers, young chaps, middle-aged-men and aged men to tick before they step out at India Gate or Jantar Mantar to speak up for women.

There should be some dos and don'ts about who can protest over the ill-treatment of women in India.

Surely, Bollywood stars should absolutely not be allowed to stand up for women. Barring a few exceptions, they are the guilty people who have been stereotyping Indian women in the worst possible manner.

Hindi cinema's lack of nuance in the portrayal of mothers-in-law and sisters-in-law, as immortalised by Lalita Pawar and Shasikala, and the buffoon-like portrayal of village beauties in hundreds of films, have created havoc in the developing minds of Indian men in the last 50 years.

A questionnaire for all those boys, teenagers, young chaps, middle-aged-men and aged men to tick before they step out at India Gate or Jantar Mantar to speak up for women.

Are you that man who has, already, told your mother, sister, lover and wife that gender equality is a fundamental human right and you agree to uphold it?

Indian women want dignity, but they definitely want equal rights which are non-negotiable.

Are you that husband who told your wife, "Bloody hell, why should you wear a mangalsutra after marriage? What an obnoxious idea! Give me something to wear on my body, too, to express my married status and my abiding affinity to you."

Are you wearing something to match the tradition called mangalsutra?

"The equal status of men and women in the 21st century starts here and now." Did you say that to your wife on your suhaag raat?

Did you tell the mother of your child that 'child-bearing' may be her exclusive job, but you have an equal partnership in 'child-rearing'?

When you entered college, did you tell your mother, "Please don't worry about my food, my clothes and my chores. I am a collegian now. I am grown up. You slogged for me for so long. Let me take care of you, for a change! Let me manage our kitchen, our home along with you."

Are you that brother who is not playing the role of 'security-wallah' to your sister? Yes, a woman's body is different from a man's, but it doesn't mean you develop a 'watchman's mentality' of guarding your sisters all the time.

Provide her self-confidence if she needs, be there when she wants you, but don't resist the opportunities that come her way just because you feel insecure for her.

The realities of life should not be an excuse to impose restrictions on your sister's access to opportunities that are available to you.

Have you checked if your religion, caste and community give equal rights in properties to womenfolk as much as men? Even if they don't, will/do you do so?

Have you told your wife to stop fasting on Karva Chauth, and graduate to 21st century India?

Have you understood what sexual violence is?

Whether it is rape or sexual abuse of any kind, it is the men and men alone who should be condemned, punished and should be made to feel guilty.

Have you understood why women should have no stigma at all after sexual abuse or rape?

It is the men who are the criminals here and they should have guilt feelings, stigma and huge psychological problems after dominating a woman's body forcibly, immorally and savagely.

Are you the kind of man who is spewing abuse all the time?

Has it ever struck you that all the cuss words put down the woman, and by repeating them you are perpetuating the degradation of women?

In cases of rapes and other cases of sexual violence, have you ensured to tell women to 'move on' and not allow the nonsense of 'scars of rape' etc to come in their way?

Are you that husband who never asked his wife to undergo a sex test when she was pregnant?

Do you consider the girl child to be at least equal to the boy child?

Have you snubbed your mother when she tried to give preference to you over your sisters?

Did you tell your wife that the concept of 'maika (mother's home)' and 'sasural (husband's home)' are outdated in the 21st century?

Your wife's parents are no less important than your own parents.

Did you tell your wife: "Where love resides is our home"?

If, and only if, your answers to the above questions are 'Yes', do you have the right to speak up for women's cause.

For the rest, you can go back to watching Hindi films.

We are better off without your support. 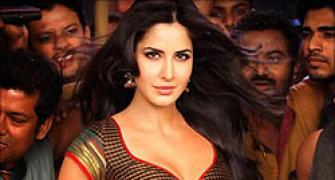 Bollywood to be blamed for the way men see women?
What kind of a nation fails to protect its women?

How to shame the shameless sexual predators

What drives the Indian male to rape?