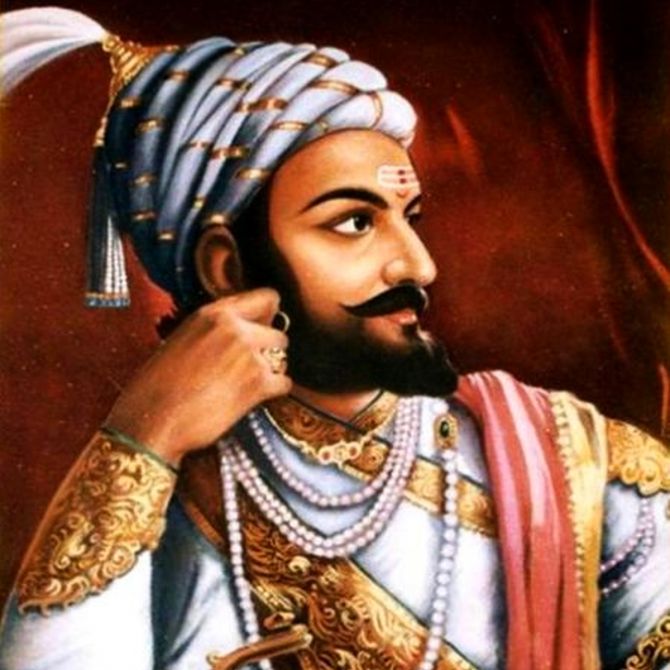 As we celebrate the birth anniversary of Shivaji the Great on February 19, it is time to reflect on his many-faceted personality.

Above all, he was a statesman such as was not born in India for a long, long time.

On April 27, 1645, an event that took place on a remote high plateau in the Sahyadri mountains changed the course of Indian history.

On that day, 16-year-old Shivaji with a dozen friends took an oath to establish 'Hindavi Swarajya' (Indian Self-Rule) at the Raireshwar temple, 80 km south west of Pune.

A few distant centuries ago, on a nondescript day
I can barely imagine
Upon what craggy hilltop, within a dense sunless forest
Lightning-like, across your forehead, there flashed
The thought from above-
With a singular religious thread, this torn up, fragmented
Bharata, I shall bind in One.'
(Shivaji Utsav, written in 1904; Translation by Dr Monish R Chatterji, University of Dayton). 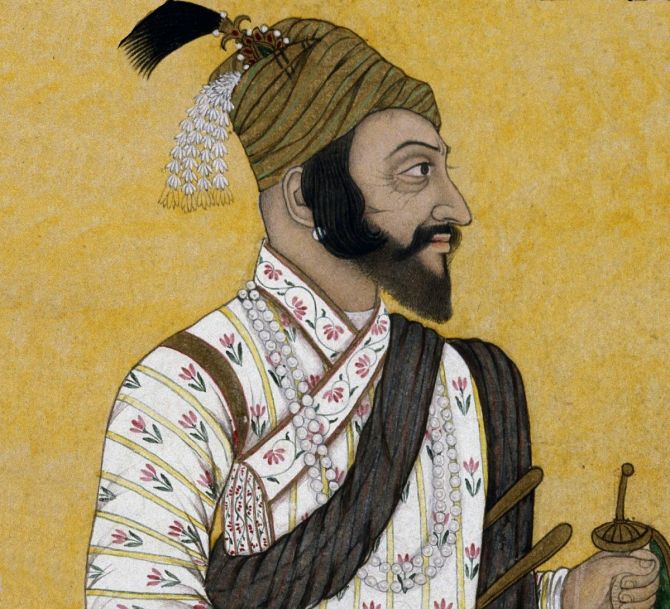 Shivaji the Great is justly celebrated for his military achievements like killing Afzal Khan in personal combat, leading a commando raid on the Mughal garrison in Pune and his daring escape from Agra.

But his achievements in the field of diplomacy and realpolitik are not so well known.

In the 17th century, he practiced great statesmanship to create a 'Hindavi Swarajya' and successfully deal with a two-front situation.

As Shivaji embarked upon his campaign to establish 'Swarajya' (self-rule) he faced threat on two fronts.

In the South, the powerful Sultanate of Bijapur was an immediate menace while the far greater threat of Mughal/Rajput combines lurked in the North.

Two years before he routed Afzal Khan in the battle of Pratapgad in 1657, he opened negotiations with the then) Prince Aurangzeb who was the governor of the Deccan.

In the initial stages, as he snatched territory from V=Bijapur, he adroitly exploited the Sunni-Mughal antipathy to the Shia sultanates of Bijapur and made sure of the neutrality of Mughal/Rajput combine while he decimated the Bijapur sultanate.

After having achieved a decisive victory over the Bijapur forces, in 1664 as Aurangzeb sent a large force to deal with th Marathas, Shivaji signed a truce with Bijapur and helped them check the Mughal/Rajput empire.

After he attempted to work out peace with the Mughals, he anticipated the Mughal invasion from the north. To deal with this he shifted the centre of gravity of his kingdom from the Deccan plateau to the Konkan coast.

The terrain -- a rugged coastal area -- was unsuitable for movement of the Mughal adversary's heavy guns, cavalry and war elephants.

In this latter period of his reign, he used his resources to build a powerful navy and built many sea forts, an area where the Mughals were weak.

He also stitched an alliance with the Bahamani sultanate in the south and created a Southern Coalition.

Portuguese records of the period also mention that Shivaji had planned an alternative capital in the deep South (Tamil Nadu) at Jinji, nearly 1,000 km away from Raigad, his capital in Maharashtra. 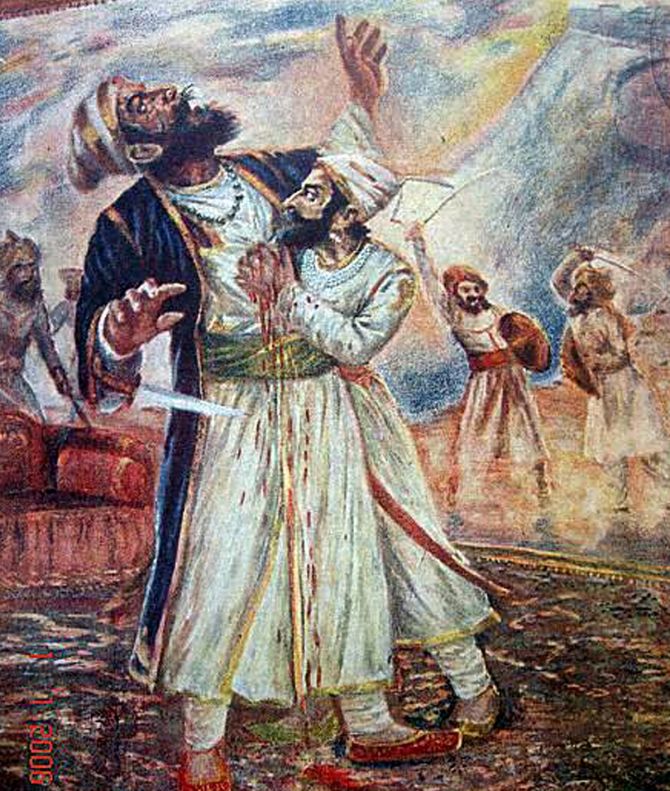 In this sense, Shivaji can be rightly called the founder of the modern secular state of India.

Kafi Khan, the Mughal court historian, rejoiced when Shivaji died: 'The Kafir has gone to hell,' he wrote. But he admitted that Shivaji treated the Quran Sharif with respect and never touched mosques. 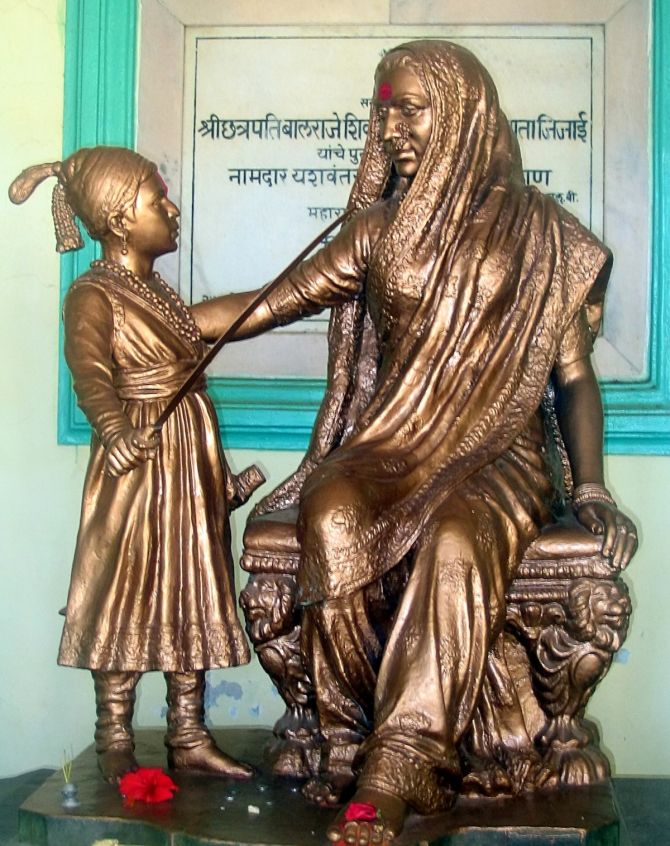 IMAGE: A statue of young Shivaji with his mother Jijabai installed at the Shivneri fort.

Aurangzeb had revived the hated jizya -- a tax that had to be paid by non-Muslims. Shivaji's approach to the question of religion comes out clearly in his letter to Aurangzeb.

In a regretful tone, Shivaji wrote, 'In this land, Muslims, Hindus, Christians and other people have stayed together without any problem. Your own great-grandfather, Akbar, was well known for his tolerance and fairness to all faiths. Your imposing of this tax will lead to terrible hardships for poor people and your empire will not survive.'

'The Quran is God's revelation and it does not make a distinction between god's children. In the mosque the Muslims give azaan and Hindus ring bells in their temples, so what is the difference?'

Aurangzeb, who presided over the Mughal/Rajput empire, flouted every norm that Shivaji followed.

He did not attempt to avoid a two-front war. He followed a policy of religious intolerance, destroyed the Mathura and Kashi temples and imposed jizya on Hindus.

Aurangzeb also embarked upon a campaign of forcible conversions to Islam in many areas including the Kashmir valley.

By the time he died in 1707, a defeated and frustrated emperor, Aurangzeb had destroyed the Mughal empire. 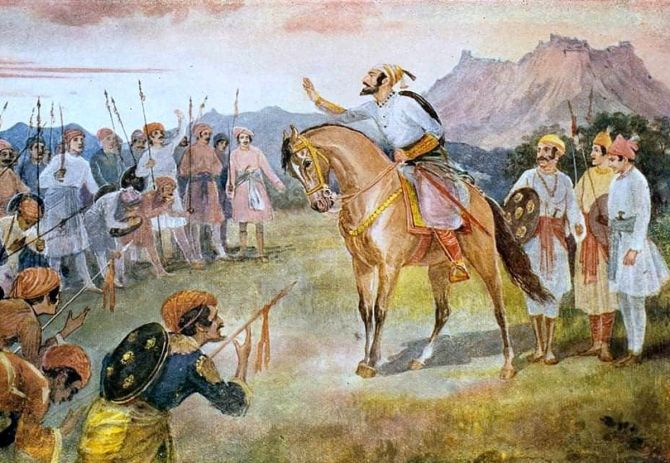 Shivaji was one of the very few Indian rulers of the 17th century who foresaw the threat the English posed to India.

'The English are no ordinary traders and money lenders. Behind them stands a powerful kingdom. They are so clever that they will steal from under your feet, but you would not realise. Be extremely careful while dealing with them,' Shivaji wrote to his officer in the Konkan.

The English often provided shelter to the Siddi of Janjira in Bombay. The Siddi had by this time switched his alliance to the Mughals.

The British, with commercial interests in Surat, were inclined to keep the Mughals in good humour.

The Siddi took full advantage of this situation and launched several raids on Maratha territory using his strength at sea.

When faced with the Maratha naval threat his ships took shelter in Bombay harbour that had by now become the main English base on the western coast.

Shivaji realised that the only way he could check foreign powers and the Siddi was by establishing strong forts on the coast to blockade Bombay. 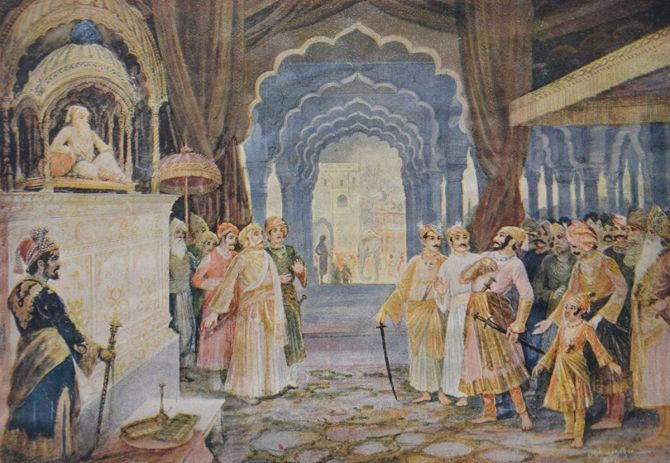 In April 1672, Shivaji intended to occupy the small island of Khanderi, south of Bombay. The island commands the approaches to Bombay harbour and by occupying it Shivaji thought of checking the English.

After careful preparation, work on the building of the fort started in September of the same year.

Daulat Khan and Mainayak Bhandari, Shivaji's principal naval officers, were in charge of the work.

The English claimed the island was part of the Bombay group of islands and belonged to them.

The Siddi and the English threatened to launch a joint operation against the Marathas.

Shivaji at the time was involved in an expedition to the south and the Marathas temporarily abandoned the project.

Seven years later, when Shivaji found time to pay attention to this area, work on fortifying the island was resumed.

To bring effective pressure on the English, Shivaji decided to menace the Bombay harbour itself with a land threat.

He assembled a 4,000 strong force in the vicinity of Kalyan to attack Bombay. But he needed permission from the Portuguese for passage through Sashti which the Portuguese refused.

With the memories of Shivaji's devastating attack on Surat fresh in their minds, there was panic in Bombay. 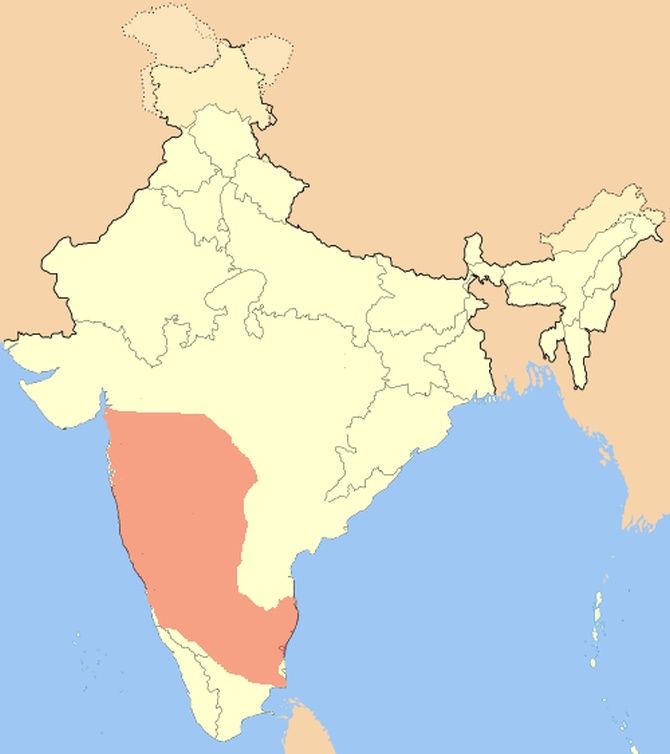 Khanderi is a small island located 10 miles to the south of Bombay and is 3 miles from the mainland.

On September 2, 1779, the Maratha navy landed a force of 500 men on Khanderi to start work on the fortifications.

Two hundred members of this force were workmen while the rest were soldiers. The English decided to starve the garrison into submission by launching a blockade of the island.

Four large ships were sent from Bombay for this task. The Marathas, under cover of night, sent provisions to the garrison in small ships.

On September 19, the English attempted to land on the island, but the alert defenders foiled the attempt.

Later in October, more ships joined the blockade and it started having some effect. The blockade continued for more than three months.

In December the English sent a message to the garrison asking them to surrender. Shivaji had given strict instructions to his men to fight to the last.

In January 1680, Shivaji took action against the English factory at Rajapur and imprisoned the Englishmen there.

The Maratha base at Khanderi was to be a source of constant trouble to the British in the future. It was a great defensive victory for the Marathas. 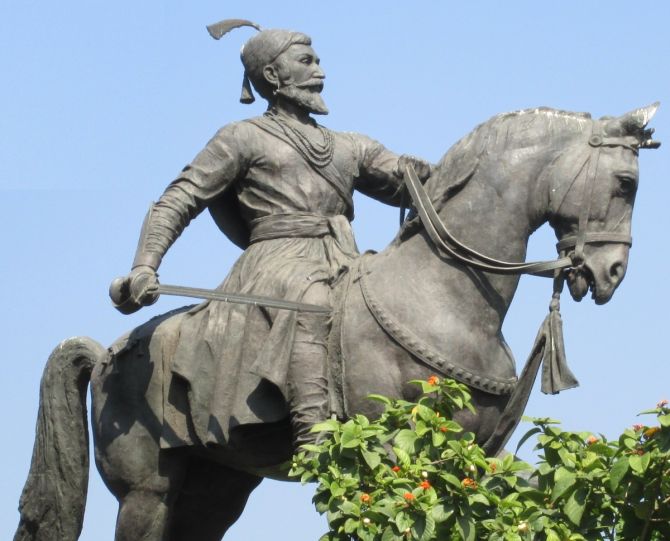 IMAGE: The statue of Shivaji opposite the Gateway of India.

Shivaji died less than two months after this clash. It is significant that the last major battle of his was a naval engagement against the English.

Had he lived he would have given greater weight to the building of the navy and concentrated on the coastal areas.

The Marathas had begun trade with Muscat and Mochi; the main commodity being salt.

Shivaji also attempted to establish a monopoly in the betel nut trade. He was eyeing the lucrative trade in spices.

Shivaji's death gave a totally different direction to Indian history since it was a signal for the ambitious Mughal emperor Aurangzeb to come South to finish off the conquest that had eluded earlier Mughal emperors.

In the life and death struggle against the Mughal empire, the Marathas had no time to spare for the threat posed by the English and for the next 70 years, there was relative peace between the two.

The English failed to take much advantage of the weak position of the Marathas as a very able seaman, Kanhoji Angrey, had taken charge of the Maratha navy by then. He soon built up his strength to such an extent that the English reluctantly paid him taxes and his 'pass' was needed for a safe passage in the western sea.

Colonel Anil A Athale (retd) studied Maratha history as the First General Palit Military History Fellow at the Institute of Defence Studies and Analyses.
Colonel Athale is the author of Maratha Struggle for Empire.
This column is based on extracts from his forthcoming book Story of the Mighty Marathas and their Empire.