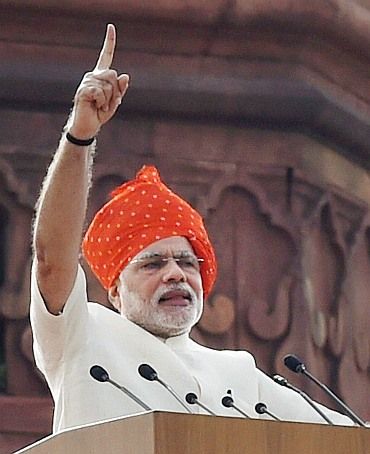 Prime Minister Modi wore the hat of a social reformer on Friday.

His speech had the soul of a Rashtriya Swayamsevak Sangh pracharak. For them, the power of New Delhi is all about shaping Indian families and building national character.

Sporting a bright red bandhni-designed safa along with simple kurta-chudidar helped him play out his "Hindu-nationalist" identity. His social ideas too had a thread of "cultural nationalism" of the RSS style running through it.

Standing firm on the dais without a bullet-proof glass barrier, alongside the national flag, Modi displayed with full vigour his typical macho body language, his government’s priorities in the social sector and his own resolve to govern the country.

He talked less about politics and more about basics.

His language was assertive but not aggressive.

Even if it was a bit ceremonial, he graciously acknowledged his predecessors.

The prime minister reminded people that he is an outsider. And, true to his outsider spirit, he talked about toilets.

Modi’s speech has to be applauded for bringing toilets, gender imbalance and cleanliness into the national discourse.

He gave himself a things-to-do deadline for building toilets in all schools across India within a year.

One wished he added the adjective, 'functioning' before toilets. Thousands of schools in India does have toilets but they either do not have running water or are not being maintained.

This is almost an impossible task. So let us see with immense interest how Modi follows his promised dream.

Also, his announcement of creating bank accounts for the poor and giving them Rs 1 lakh insurance is loaded with many possibilities and impossibilities.

From a sheer business point of view, Modi is talking about some potential insurance business of Rs 23,000 crore!

Officially, there are around 23 crore poor in India. Minimum, one would say.

Giving each of them Rs 1 lakh worth insurance, along with opening their bank accounts, is awesome but seemingly impossible idea to fulfil within the time limit Modi has set.

Precisely for that reason, Modi has created a flutter.

Let the administrative details of his Independence Day ideas come out. Will he give business to the private insurance companies or the government-controlled Life Insurance Corporation?

Knowing fully well that he was not playing elite, restricted and fitting-to-the-solemn-occasion

speech, Modi said he does not know whether people will appreciate him talking about dirt and toilets from the ramparts of the Red Fort. But since he came from a poor family, he expressed his concerns for such issues.

The most redeeming feature of his speech was his penchant for cleanliness.

He said that by 2019, ensuring cleanliness will be the most fitting tribute to Mahatma Gandhi on his 150th birth anniversary.

The prime minister’s speech constantly gave the feel that change is in air.

It was high time an Indian Prime Minister went back to basics and talked about how shameful it is that the country’s womenfolk have to wait for darkness to go out in the open to defecate.

Modi asked, “Can't we build toilets for the security of our women?”

While touching the issue of rape-related crimes, Modi said: “I want to ask parents, when daughters turn 11 or 14, they keep a tab on their movements. Have these parents ever asked their sons where they have been going, who they have been meeting? Rapists are somebody's sons as well! Parents must take the responsibility to ensure that their sons don't go the wrong direction."

His idea of announcing a scheme named after Parliament called Sansad Adarsh Gram Yojana is a challenging one too.

Through the scheme, which will be kicked off from October 11 -- the auspicious day of Karva Chauth, Modi is talking about creating some 3500-plus ideal villages by 2019.

During the course of his speech, Modi, in a cold-blooded manner, dismantled the Planning Commission, ending the Nehruvian style instrument of national deliberations on planned growth.

Asserting that the country has changed, the prime minister said that since the needs had changed, it was time to build a new institution instead of renovating the old relic.

Modi also talked about skill development and tried to inspire a "Make in India" mission.

He, however, smartly avoided political traps.

His government was elected by people who were angry on issue of corruption, price rise and insecurity due to internal and external vulnerabilities.

Modi didn’t touch issue of corruption, high cost of living and Pakistan-backed terrorism or even the issue of black money stashed abroad.

He diverted the national attention to social issues rather than hardcore economic or security-related issues.

Modi’s speech, as expected, was perfectly-delivered. But it was short of hard issues that could give the nation new direction or clear hint of fundamental changes that are likely to come though governance particularly.

Modi, though, has time on his side.

If his government machinery starts building toilets on a war-footing and if some 780-plus MPs start building the ideal model villages in nooks and corners of India, Modi will deserve applause on August 15, 2015.
Sheela Bhatt