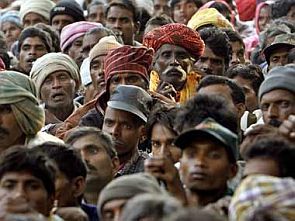 Few readers will remember the socialist utopia of Indira Gandhi when food queues were the norm even for the middle class and tankers supplied water at odd hours of the night twice a week. Is that what you are trying to return us to, dear Congress, asks Jaideep Prabhu

Namaskar. I did not vote for you. I would like to be able to, if only because I like to have a choice when I vote; I am no idealist and do not expect your candidates to be paragons of virtue, but it would be nice if they were at least viable and worthy of consideration. I am not even asking for integrity or competence, just that they not lead the country down a suicidal path.

You claim to represent the common man; you claim to work for him (her too, if you want to get all politically correct). You are less interested in big business or the burgeoning middle class. In fact, one of your critiques of your primary opposition, the Bharatiya Janata Party, in 2004 was their trickle-down economics that served only the well-off. I can understand that even if I do not accept it.

I am not sure if you have looked in the direction of a common man recently. If you had, the first thing you would have noticed is how worried they are about the spiralling cost of food. In case you missed it, here are a few basic details: using 2004 as a base year, the prices of ten major food and crop groups in India have risen over 200 per cent!! If a family of five would have required Rs 5,000 per month for food when you came to power, it is likely that the same family would need approximately Rs 12,500 today. This data, by the way, comes from the Office of the Economic Adviser to the Government of India, which is a part of your government’s ministry of commerce and industry.

The Private Final Consumption Expenditure, calculated by the Central Statistics Office, of the ministry of statistics and programme implementation, tells us that the highest three spending categories of Indian households are vegetables, milk products, and cereals, all of which have followed the general pattern of the food price rise. Vegetable prices in particular have been remarkably unstable, with constant spike during the nine years. 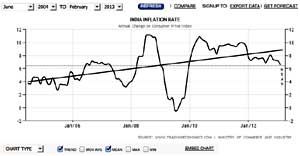 In the same period, that is, the duration of your tenure, inflation has averaged nine pc. Even if salaries had kept up with inflation, which is damn near impossible in the unorganised sector, the faster rising food prices would have pinched. For your common man, this would have been even worse. Also affected are the few middle class pensioners dependant upon a fixed income.

A recent study conducted by the United Nations Population Fund in India revealed that 71 pc of people between the ages of 60 and 80 were forced to work out of economic necessity. Though part of this is undoubtedly due to abuse of elders by their children, RS Deshpande, the director of Population Research Centre, Institute for Social and Economic Change, said that cost of living was largely to blame.

It is not merely the matter of food prices that worries the common man -- it is reports of criminal wastage of food stocks thanks to asinine government regulations, transport bottlenecks, distribution bureaucracy, and poor storage facilities. The food that finally trickles through to the local ration shop is then subject to one last indignity -- dispersal through the black market and adulteration of remaining stores to conceal the theft. It is not uncommon to find sand or tiny rocks in the rice, sugar, or other supplies from the Public Distribution System.

Few readers will remember the socialist utopia of Indira Gandhi when food queues were the norm even for the middle class and tankers supplied water at odd hours of the night twice a week. Is that what you are trying to return us to, dear Congress?

An equally uneasy situation is the irregularity of the water supply -- according to a 2013 joint World health Organisation-United Nations Children's Fund study, barely 35 pc of Indians have proper sanitation facilities and only 25 pc have piped drinking water while the rest rely on bore wells, tankers, and water bodies. As the ministry of drinking water and sanitation reports make clear, the government has been struggling with improved access due to over-exploitation of water sources, leaching of dangerous chemicals into water sources, and other problems.

Not only is there a direct correlation between poor access to water and sanitation and health, water also happens to be one of those things we simply cannot live without. Why has this not been your top priority in the past nine years?

While the common man may care or understand less about nuclear policy, balance of trade, and external debt, I suspect there is increasing distress about rising transport costs. As state-owned transportation corporations hike the price of their monthly passes, the most directly hit are day labourers living far from the more expensive urban centres where they work. A monthly pass on Bangalore's BMTC costs approximately Rs 925, a sizeable amount for someone making Rs 6,000 a month as a domestic servant. Please tell me you are not considering a Right To Transport now?

Speaking of travelling to work, could we have some? The National Development Council reports that in the five-year period from 2004-09, India lost 19 million jobs. This is not even taking into account the number of jobs not created because the government has simply not made that sector a priority. Have you considered that had you just done your job properly we might not have needed drastic resource sinks like NREGA?

To sum it up, the economic policy tailored for the common man raises the price of fundamentals such as food, makes it costlier for him to report to work, and when he finally gets there, tells him that he has been laid off. Crucially, your government has failed in providing access to the two most important things to life itself -- food and water; everything else is a distant third. You, my dear Common Minimum Programme Party, have dropped the economic ball and done so in a grand fashion. Between your myriad taxes, inflation, and artificially created scarcities, why are you nudging people into corruption?

I will not include middle class woes here for two reasons: 1. this is a short letter and not a book; and 2. you don't seem to be concerned about the middle class at all, your rhetoric always highlighting the plight of the lower income groups. Considering your record in serving your hand-picked mandate, honestly, I am thoroughly confused -- on the one hand, you create white elephant welfare schemes which we will be saddled with for an eternity as they ossify to form the third rail of Indian politics while at the same time losing control of events such that any potential positive effects of these schemes would be wiped out. It seems your only game plan is to create dependent automatons, not citizens.

I hear stories that India's economy has been savaged by high oil prices and the European financial crisis. Yet oddly, India maintained robust growth even during the volatile initial years of oil price increases, and prices have been more stable of late. As for the Eurocrisis which hit in 2010, it does not explain the 19 million jobs lost in the five years prior to that. In any case, if we wanted a government that made excuses, we would have searched among third grade truants. Why do we need you?

I fundamentally disagree with your welfarist policies; nonetheless, I would have been willing to accept your goals as alternate ideas of growth had you actually delivered on them. My problem, dear Congress, is that not only have you severely damaged the Indian business class but you have also compounded the problems of the Indian lower class while doing so. Not only are you not delivering what you should, but you are not delivering even what you promised.

Sadly, you do not take the responsibility for your actions but waste our time with your insipid and interminable commentary on secularism, the excesses of social media, which minister is ready to sweep whose floor, and other inconsequentials.

The 2014 elections are not far off; I'd like to ask you to not compete at all, but it is India's curse that you are the only viable alternative national party there is. So let me ask you this, and one of you will particularly appreciate this question: would you rather be remembered like the Medicis or as the Borgias? 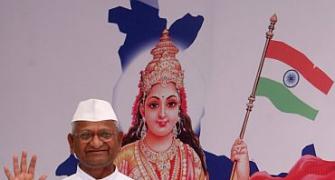 An Aam Aadmi's open letter to the PM