The Taliban has its backers, notably Pakistan and China.
Their purpose is to have a monstrous entity near India's northern borders to keep democratic, secular India off-guard, observes Amulya Ganguli. 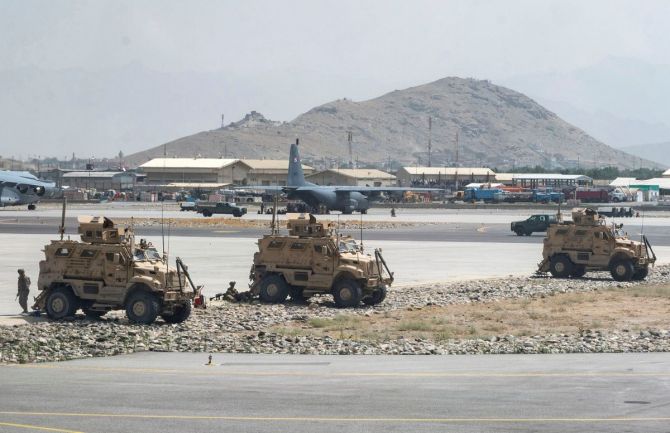 Has the hasty American withdrawal from Afghanistan and the subsequent chaos there substantiated the colonial narrative that the 'coloured' natives needed their white masters to maintain order?

It will be politically incorrect to say so, but the belief of those horrified by the sight of hundreds running alongside a moving plane in Kabul airport in the hope of boarding it, must have been that the Americans would have done well to stay behind for some more time.

This was also what the colonials argued -- that they would hand over power once the locals were 'ready' for it.

The colonial sojourn was meant to prepare them for the task of assuming responsibility.

In Afghanistan in the 21st century, the sojourn did not help.

As the country's president Ashraf Ghani left Kabul, allegedly with millions of dollars, Winston Churchill's searing words about the successors of the colonials being 'rascals, rogues, freebooters and ... men of straw' can be said to have been validated.

The British imperialist may have been wrong about India, but not about several other countries like Uganda, for instance, while Afghanistan is the latest example of how the billions spent on firming up its military muscle for taking on the Taliban have all gone down the drain.

It is not that the colonials, too, were not rascals and rogues as the example of Belgian Congo shows.

Vietnam showed how erroneous such an assessment can be.

It is also true that Islamic bigotry makes Afghanistan different from other cases of colonial rule.

But it is undeniable that turning Afghanistan into a modern, secular, democratic country would require a sustained period of overlordship by a 'foreign'; power whether it is America or India.

India was performing this task by building a parliament and schools for girls, among other things, and there is little doubt that its benign presence had the support of the Kabuliwallahs, to quote Rabindranath Tagore.

India's was the kind of 'colonialism'; which can be endorsed.

In a way, it was in line with the conversion of the traditionally bristling Afghan culture of tribalism into the conciliatory khudai khidmatgar experiment of service to the people undertaken by Khan Abdul Ghaffar Khan or the Frontier Gandhi, as the Pashtun leader was called in the pre-1947 period.

But while the Afghans in general appeared to have supported India's friendly overtures, they were anathema to the Taliban as they went against their medieval mindset.

To make them acquiesce in the modernisation process, it would have required America's military presence along with India's civilian enterprises for a long time.

Changing the Taliban's outlook which does not allow a grown-up woman to go around in a public place without a male relative and with her face uncovered is a herculean task.

Nor is it easy to make them believe that the centuries-old sand sculptures of the revered figure of another religion should not have been blown up.

The Taliban, therefore, is an aberration -- an implant of a medieval outfit in the modern age.

Yet, it has its backers, notably Pakistan and China.

Their purpose is to have a monstrous entity near India's northern borders to keep democratic, secular India off-guard as it stands in sharp contrast to Pakistan's military-dominated and China's totalitarian regimes.

It is their cynical, diplomatic exploitation of medievalism, which included providing a safe haven to Osama bin Laden by Pakistan, which marks out their difference from America's essentially defensive act of punishing the perpetrators of the 9/11 carnage in the New World.

But, as US President Joe Biden has pointed out, America could not get into nation-building in Afghanistan.

The objective of colonialism, which had an element of enabling nations to stand on their feet (though on the colonials' own terms), has changed.

But if Afghanistan's freedom from the shackles of (colonial) slavery, as an elated Pakistan prime minister Imran Khan has said so eloquently entails a return to the dark ages in the heart of Asia, it is likely to envelop nearby and even far off areas in its sinister gloom.