'Army personnel must be given immunity but such immunity must not be absolute, nor is it so under the present Armed Forces Special Powers Act.' Brigadier Gurmeet Kanwal (retd) lists why India must not do away with the controversial AFSPA, but ensure enough transparency to avoid confrontation with human rights. 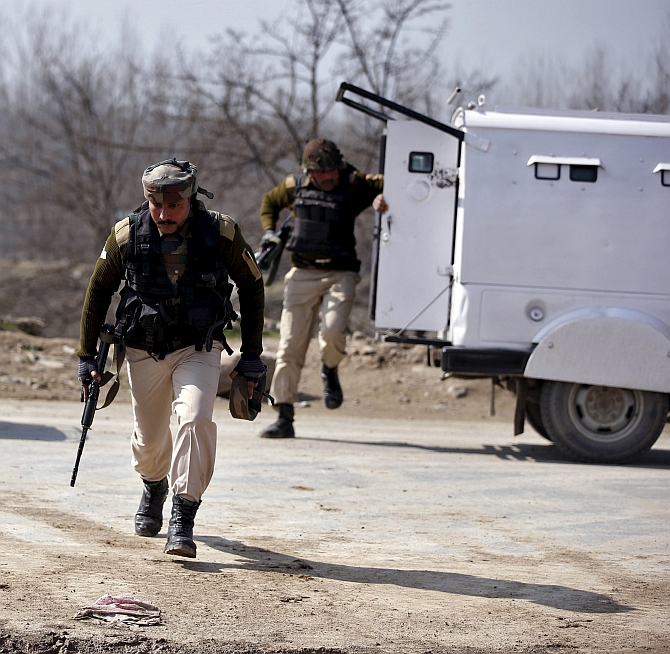 Referring to the continuation of the Armed Forces Special Powers Act, senior political leaders no longer in government have insinuated on national television that the Indian Army has been given a veto over the decisions of the Cabinet Committee on Security. Can this ever be true?

The army, navy and air force chiefs are not even permanent invitees to meetings of the CCS; they attend only those meetings to which they are invited by name.

It is the army chief's rightful responsibility to give his recommendations on issues on which his advice is sought by the defence minister and it is up to the latter and the prime minister to accept or reject it.

The army has been and continues to remain scrupulously apolitical and senior political leaders, whether in the government or not, must not create false perceptions.

As for AFSPA, the Act has been under review for quite some time.

While the defence ministry and Army headquarters are opposed to changes in the basic provisions of the Act, the home ministry is reported to have recommended a major overhaul of the Act to bring it in line with egalitarian human rights practices.

The Army clearly sees AFSPA as a capstone enabling Act that gives it the powers necessary to conduct counter-insurgency operations efficiently.

These powers are available to the police under the Criminal Procedure Code, CrPC.

If AFSPA is repealed or diluted, it is the army leadership's considered view that the performance of battalions in counter-insurgency operations will be adversely affected and the terrorists or insurgents will seize the initiative.

However, certain sections of the civil society view AFSPA as a draconian Act.

It has been dubbed as a license to kill by Syed Ali Shah Geelani, a hardline separatist Kashmiri leader.

The Act has been opposed in the north-eastern states as well. Irom Sharmila, a Manipuri civil rights activist, undertook a long fast that began in November 2000 to force the government to repeal AFSPA from Manipur and other north-eastern states. (Sharmila ended her fast on August 9, 2016 and declared her intention to become the chief minister so that she could repeal AFSPA.)

AFSPA was promulgated in 1958 in Assam and Manipur and in 1990 in J&K. The main criticism of the Act is directed against the provisions of Section 4, which gives the armed forces the power to open fire and even cause death, if prohibitory orders are violated.

It also confers the power to destroy structures used as hideouts, training camps or places from where attacks against security forces could be launched;
the power to arrest without warrant and to use force for the purpose if necessary;
and, the power to enter and search premises without warrant to make an arrest or recover hostages, arms, ammunition or stolen property.

Human rights activists object on the grounds that these provisions give the security forces unbridled powers to arrest, search, seize and even shoot to kill.

They accuse the security forces of having destroyed homes and entire villages merely on the suspicion that insurgents were hiding there. They point out that Section 4 empowers the armed forces to arrest citizens without warrant and keep them in custody for several days.

They also object to Section 6, which protects security forces personnel from prosecution except with the prior sanction of the central government.

Critics say this provision has on many occasions led to even non-commissioned officers brazenly opening fire on crowds without having to justify their action.

Critics forget that Section 5 of the Act already mandates that arrested civilians must be handed over to the nearest police station 'with the least possible delay' along with a report of 'circumstances occasioning the arrest.'

Army HQ has laid down that all suspects who are arrested will be handed over to civilian authorities within 24 hours.

Regarding firing on civilians, the army's instructions are that fire may be opened in towns and villages only in self defence and that too when the source of terrorist or militant fire can be clearly identified.

If soldiers had been opening fire indiscriminately, there would have been hundreds of more civilian casualties in J&K since 1989-1990 when the insurgency had begun.

A committee headed by Justice Jeevan Reddy was appointed in 2004 to review AFSPA. Though the committee found that the powers conferred under the Act are not absolute, it nevertheless concluded that the Act should be repealed.

However, it recommended that essential provisions of the Act be inserted into the Unlawful Activities (Prevention) Act of 1967.

The key recommendations of the Reddy Committee were:

Army personnel must be given immunity but such immunity must not be absolute, nor is it so under the present AFSPA.

The central government can and has sanctioned prosecution where prima facie cases existed.

Without these powers, commanding officers and young company commanders are likely to follow a wait-and-watch approach rather than actively pursue hardcore terrorists with enthusiasm and risk being embroiled in long-drawn litigation, which may be based on false allegations.

On its part, the army must make it mandatory for its battalions to take police personnel and village elders along for operations which involve the search of civilian homes and the seizure of private property.

The practical problems encountered in ensuring transparency in counter-insurgency operations must be overcome by innovative measures.

The army must be completely transparent in investigating allegations of violations of human rights and bringing the violators to speedy justice. Exemplary punishment must be meted out where the charges are proved.

IMAGE: Soldiers at the site of a gun battle with terrorists on the outskirts of Srinagar. Photograph: Danish Ismail/Reuters