There is no one in Telangana to match KCR's stature and he believes he has outgrown the state, observes Aditi Phadnis. 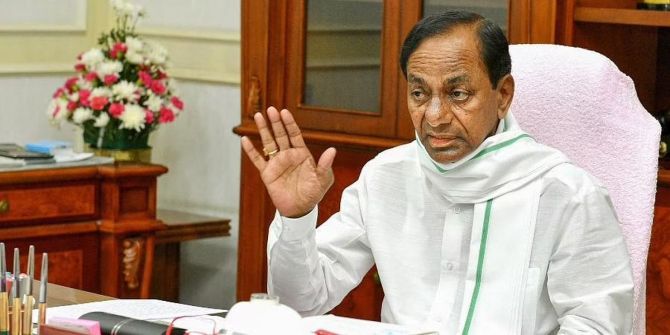 You have to say this for K Chandrashekar Rao.

The Telangana chief minister and founder of the Telangana Rashtra Samithi is not one for doing things by halves.

Time was when the Bharatiya Janata Party believed it could count on him.

But it has rapidly reviewed this decision after a series of developments that climaxed with the by-election to the Huzurabad assembly constituency in November last year, when the BJP lured away KCR's Health Minister Etala Rajender, fielding him from the very constituency from which he was elected on the TRS ticket and using him to defeat the candidate from his former party!

The Congress candidate lost his deposit (the party got more than 60,000 votes in 2018), making it evident that the primary enemy of the TRS in Telangana is the BJP.

It took no time at all for the TRS to declare war.

Through the winter session of Parliament, TRS MPs obstructed Parliament through any means they could find (which involved a particularly clever form of dive-bombing -- darting behind any MP who happened to be speaking and holding up a placard in the full knowledge that the cameras focused on the MP would capture the placard as well).

The protest was about Food Corporation of India's refusal to procure par-boiled rice from Telangana farmers.

In the coming days, KCR, who has been reaching out to other non-Congress states, will continue his initiative of forging a political front that seeks justice for non-BJP states.

His remark, that the Budget 2022-2023 was all 'golmaal', and a whole lot of borderline unparliamentary observations about the PM, are salvos in that direction.

Hyderabad will soon host a meeting of retired bureaucrats to set up a new agenda for India.

He will call on Maharashtra Chief Minister Uddhav Thackeray as well as meet Mamata Banerjee and Naveen Patnaik, to take forward the idea of federalism.

Assembly elections in Telangana are due at the end of 2023.

There is no one in Telangana to match KCR's stature and he believes he has outgrown the state.

There is no doubt that his contribution to Telangana is immeasurable.

He was in the Telugu Desam Party and an MLA for four terms.

In 1999, he was close to getting ministership, but was pipped to the post by a fellow Vellama, former CBI director Vijaya Rama Rao, who contested the 1999 elections and became a first-time MLA.

KCR might not have taken up the cudgels on behalf of Telangana if he had become a minister then.

Anyhow, he left the TDP to form the TRS in 2001 ostensibly to right the wrongs done to the region of Telangana all those years.

Telangana has been backward for centuries.

Remember, it never came under the British, but was ruled by the nizam of Hyderabad, who did set up a few factories and a textile mill in Warangal in collaboration with the French, but avenues of employment were few and exploitation abounded, something Shyam Benegal has captured eloquently in his film Ankur.

The most crucial infrastructure element -- irrigation systems -- was never developed systematically in Telangana although both the Krishna and the Godavari flowed through it.

By contrast, the coastal Andhra region aggressively lobbied for and got a garland of canals that took river waters deep into East and West Godavari districts.

KCR set up the TRS in the winter of 2001, quitting as deputy speaker of the Assembly and resigning from the TDP.

In the summer of 2001, Andhra Pradesh had local body elections.

The TRS took off so strongly that the TDP got just 10 of the 20 Zilla Parishads, despite a triangular fight -- among the TDP, the Congress, and the TRS.

Realising its potential, the Congress quickly did a deal with the TRS for the Lok Sabha elections.

In the 2004 Lok Sabha and assembly elections, which TRS fought in alliance with the Congress, the party bagged 26 assembly and five Lok Sabha seats.

He kept petitioning the Congress to give statehood to Telangana.

The Congress continued to prevaricate.

Finally, KCR pulled out of the coalition government, resigning from the labour ministership and threatened to expose the Congress for betraying the people of Telangana.

But the BJP has been in the game ever since.

Initially, KCR flirted with the BJP. But now, they are bitter enemies although many believe the Huzurabad victory is not the BJP's, but Mr Rajender's.

KCR figures he can be an alternative. His style of campaigning is earthy.

He doesn't hold too many public meetings: But when he does, it has a wham-bam-thank you ma'am effect.

He is remote, almost reclusive, but welfare is his middle name.

An anti-BJP, anti-Congress front is not a new idea. Massive egos are the biggest obstruction.

But KCR has started trying to forge one. There's no telling how much traction it will get.