'As a student of history, I am no pessimist, but regardless of which party/coalitions comes to power on May 23, the space for secularism, pluralism and minority rights has shrunk significantly,' says Mohammad Sajjad. 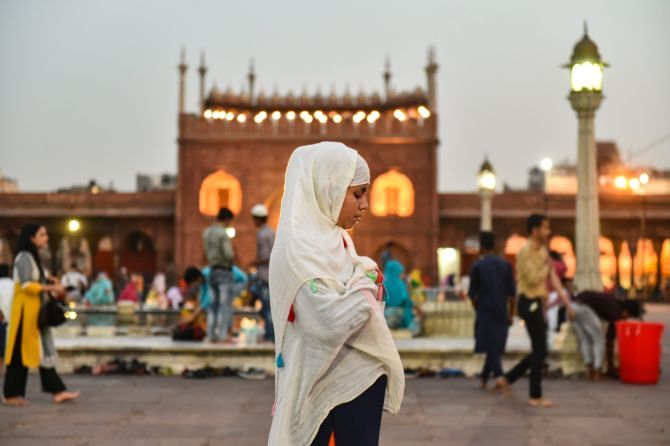 Kindly note the image has been posted only for representational purposes. Photograph: Arun Sharma/PTI Photo

The reference point for any summation of Muslims under Prime Minister Narendra Damodardas Modi's rule will begin from the Gujarat riots of 2002 when he was chief minister.

It was not only about the massacre, which has been happening in India since long with the culprits going unpunished in most cases, but that no other regime remained so openly unapologetic about it, ever.

Hence, Modi's rise to prime minister in itself was like rubbing salt into the wounds of Muslims. That it was done in the name of 'Vikas' (development), is one of the biggest ironies of the history of the republic of India.

The slogan coined by the BJP in 2014 was 'Sab ka Saath, Sab ka Vikas'. This, quite expectedly, turned out to be quite hollow.

Because not only during the campaign, but also with ominous frequency subsequently, the utterances of the PM, his aide Amit Anilchandra Shah, who is also president of the ruling Bharatiya Janata Party, and of many ministers and legislators, made it amply clear that the regime is anti-Muslim and it consolidates its base on such rhetoric as well as practised realities against Muslims.

The ruling party did not have a single Muslim MP elected to the Lok Sabha. Its minister, Najma Heptullah, even went on to declare that Muslims were not minorities.

As if this was not enough, the UP assembly election results of 2017, and the elevation of a person like Ajay Singh Bisht as chief minister, further demoralised justice-loving people.

The frequency with which Muslims were lynched (not to say of love jihad propaganda and a Ghar Wapsi campaign) -- in most cases, the police extended help to the perpetrators -- and the manner of investigation ensured that the perpetrators remained unscathed.

Jayant Sinha, a Harvard University alumnus, the Hazaribagh MP and a minister in Modi's government, even garlanded accused who were on bail. A responsible, justice-dispensing, political party would have sacked such a minister and replaced him with another candidate in the Hazaribagh Lok Sabha election of 2019.

Terror accused Pragya Ṭhakur being nominated by the BJP to contest the Bhopal Lok Sabha seat reveals a lot about the BJP, if at all there is any secret left.

Earlier, an apparently pro-Muslim party like the Rashtriya Janata Dal protected Yadav perpetrators in the Bhagalpur riots of 1989-1990. But it also did many other things to make itself least unacceptable for Muslims. That, despite such grievances, Muslims kept voting for the RJD en bloc in itself suggests something.

In 1984, anti-Sikh riots took place under the Congress regime. But at least it advanced apologies for its wilful failure in preventing and controlling the violence. Such gestures are certainly insufficient, but the BJP and Modi have not even made them!

The BJP and its other organisations, together called the Sangh Parivar, are said to be harbouring certain kinds of prejudice, and they propagate certain stereotypes about Muslims. These things get reflected in their governance practices.

A political party, in a democratic set-up, does not and cannot blame a particular segment for not voting for it. It has to ask itself, and do the needful, as to why certain groups prefer to stay away from it. Why do certain groups feel scared about certain political parties?

The BJP and the Sangh Parivar brand of nationalism is primarily based on hatred against Muslim minorities. Its ascendancy and landslide victory in 2014 has many reasons. The most important is: It asks for votes based on exclusionary nationalism and is getting the votes.

That the forces of social justice governing many provinces since the 1990s failed on many fronts, leading to the BJP's rise, is just one factor behind its unprecedented rise.

These forces, just like the BJP, believed in historical revenge. They happily ignored governance and development, and the dislocation of pre-eminent social groups was not handled with adequate tact.

Moreover, such professedly secular parties unduly and even outrageously appeased Muslim conservatives and misogynists. This has also contributed to the BJP's rise.

Just like in the professedly secular regimes, inclusion of Arzal (Dalit) Muslims among the scheduled castes remains elusive. Even Dalit civil society, perhaps, does not seem to be eager for such inclusion.

Marginalisation and under-representation of Muslims continue. The Sachar report, the Amitabh Kundu report and other such files remain as neglected as ever.

The manner in which jingoism has become an important factor in the 2019 election, one does not know how things will play out for Muslims after 2019.

Society has been communalised on a huge scale. Many disadvantaged social groups have fed into anti-Muslim hatred.

It is so deep at the social level that even the most informed and vocal segments have not asked the ruling BJP why it does not talk of its own manifesto of 2014, on issues of universal concern such as youth unemployment, economic development, farm distress, the dreaded effects of demonetisation and GST.

In fact, these informed and vocal sections seem to be more ardent supporters of the BJP. Worst of all, a large section of television news channels treat Muslims and other secularists as culprits and fifth columnists.

As a student of history, I am no pessimist, but regardless of which party/coalitions comes to power on May 23, the space for secularism, pluralism and minority rights has shrunk significantly.

It will take longer to build these up even if the BJP, by any chance, is replaced.

All these does not augur well at all for a democracy. Let us hope for the best about the future of India. It has a robust and resilient civilisational character.

On that, we can hope against hope!